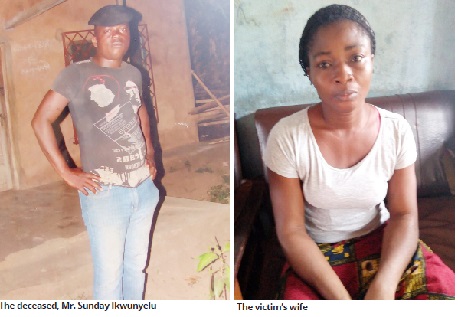 Tension-soaked grief pervaded the family of Ikwunyelu family in Akpulu village, Ugbenu in Awka North local government area of Anambra state, following the horrific death of their son, Mr. Sunday Ikwunyelu, popu­larly known as ‘A-Big’, who was allegedly killed by his relative and friend, Mr. Ifeanyi Eziechine over a ludo game.

The deceased, a father of six children, according to the infor­mation at the disposal of Orient Daily, was said to have been hit with a heavy weapon before his genitals were cut off with a knife, leading to heavy bleeding that eventually claimed his life.

The alleged murderer is still at large but his mother, Mrs. Mau­reen Eziechina and his wife, Ada Eziechina have been arrested by men of the Achalla police division.

When Orient Daily visited the family, the wife of the deceased, Mrs. Maryrose Ikwunyelu could not hide her emotions as she sobbed uncontrollably while nar­rating the incident that led to her husband’s sudden demise.

“I was in front of my shop playing ludo game with one nurse Rebecca when Ifeanyi, who hap­pens to be my husband’s brother, joined us. He requested to be allowed to participate in the game but I declined on the ground that he often caused trouble each time he participated and lost out in the game. Sometimes, it would lead to wanton destruction of some items in my shop and the compound.

“It was on that note that he took offence and this led to ex­change of words. He abused me and called me all sorts of unprint­able names. My husband was not around then but when he came back, somebody else told him how Ifeanyi abused me right in my shop. This made my husband to confront Ifeanyi.

“It was that confrontation that led to a fight on that Tuesday morning between the two and my husband, out of anger, confiscated his motorcycle ignition key, insist­ing that he must pay for all the damages he caused in my shop.

“This incident happened in the morning but, around 6:30 pm, my husband rushed off to the neigh­boring village to watch the Nige­ria/Agentina match. In no time, someone rushed to our house to announce that my husband and Ifeanyi were fighting again; that Ifeanyi waylaid him and attacked him with a heavy weapon from behind.

“He was still struggling for survival when he grabbed his genitals and cut it off with a knife. He was already lifeless at the point I got to the place and this happened right in the presence of his (Ifeanyi’s) mother and wife, an indication that it was a calculat­ed plan to kill my husband”, she narrated.

The mother of the deceased, Mrs. Louisa Ikwunyelu, who looked calm but pale, said that she could not believe that her son was no more. She called for justice to prevail on the matter. “I am calling on the Nigerian police to fish out the whereabout of Ifeanyi that killed my son. My son cannot be buried until Ifeanyi’s where­about is known. They must be buried together. Ifeanyi’s mother vowed to eliminate my family and she said it to the hearing of many”, she said.

It was also gathered that the mother and wife of Ifeanyi had been granted bail and that they had gone into hiding at the neighboring village, called Enu­gu-Eketeke, Ugbenu at the house of one Mrs. Ekedimma Nweke.

Orient Daily investigation, however, traced the duo to the area but was told that the assail­ant’s mother, Mrs. Maureen was critically ill, as a result of her detention in the police cell, while the wife, Ada went to see her relations.

On the consequences of such tragic incident in Ugbenu town, an elder townsman from the area who pleaded anonymity said it was customary that anybody who shed innocent blood intentionally will die by hanging, adding that Ifeanyi, if found guilty, would be compelled to take his own life.

Buhari will win in 2019 without R-APC, Galadima – Oshiomhole