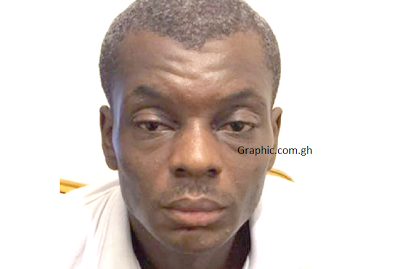 A 34-year-old man has been arrested by the police in Ghana for allegedly killing a Nigerian commercial sex worker, who he claimed stole his money after he had had sex with her.

Isaac Sackey is said to have handed himself over to the police after stabbing the said prostitute two times in the stomach and thigh on Wednesday, March 8th.

He is said to have approached the woman, identified only as Tina, a Nigerian, for sex at a drinking spot at Baatsona, near the Spintex Road, in Accra, at about 8 p.m after having some drinks with his male friends.

After drinking some bottles of liquor, the two are said to have agreed on a fee for the service and they went off to Sackey’s house where they spent the night.

Confirming the incident, the Accra Regional Police Command Public Relations Officer, Assistant Superintendent of Police (DSP) Mrs Effia Tenge told the Daily Graphic that according to Sackey, after several bouts of sexual intercourse with the woman, he went to the washroom to freshen up at about 2 a.m.

When he returned, he saw the woman going through his belongings in the bedroom and realised that GH¢120 cash had been stolen. Mrs Tenge said Sackey told the police that he immediately accused the woman of stealing the money but she denied it.

“In the heat of an ensuing argument, the woman is said to have pulled a knife from her bag and attempted to stab Sackey,” she said.

However, according to Mrs Tenge, Sackey told the police that a scuffle ensued and in the course of the struggle he overpowered the woman and the knife mistakenly injured her in the stomach.

She said Sackey locked his room and then went to the Psychiatric Hospital to report the issue where he was directed by the hospital authorities to report himself to the police.

After receiving the news, Mrs Tenge said police officers went to the Manet Gardens Apartment of Sackey where the body of the victim was found lying in a pool of blood.

A careful assessment of the body by the police, she said, revealed that the victim had a knife wound in the stomach and on the thigh, indicating that she had been stabbed twice.

The body has since been deposited at the Police Hospital morgue. The deceased is yet to be identified by the family since the suspect claimed it was the first time they had met at the drinking spot.

Some neighbours of the suspect claimed he had a mental disorder, but the police are yet to verify that information.