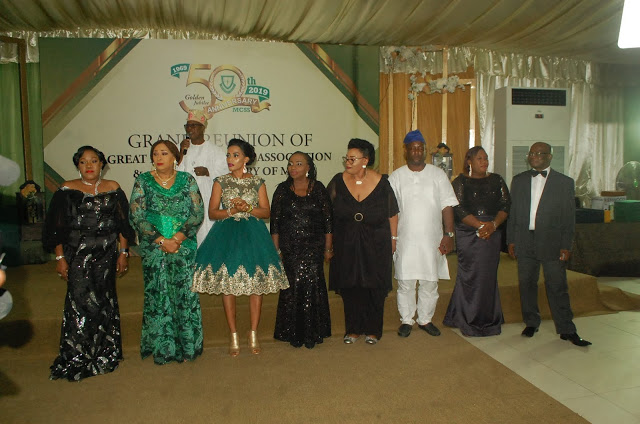 •Details Of Their First Grand Re-Union

Friday January 25, 2019 was a day that brought back memories for both old and new members of the Great Landers Alumni Association (GLAA), the alumni body of Maryland Comprehensive Secondary School (MCSS) which recently celebrated its 50th anniversary and first grand re-union. Starting from the red carpet down to the main event and grand finale, GLAA members across the globe came in en-masse to grace the all important event and City People Magazine was there to bring you juicy details of how the event rolled, enjoy.

The Excel event centre located along Billings Way is a serene venue which housed over 500 Landers that came from different parts of the world to meet their old friends and acquaintances whom they have not seen for over 50, 40, 30, 20 years and more. Starting from the entrance, the sight and sound of Landers and their luxury cars showed that there couldn’t have been a better space and venue to fully match the glamour of the event than the selected venue.

The Landers stormed the red carpets in their numbers, unwinding old memories but the most attractive part was not the poses but the glamorous attire each Lander wore. A touch of black being the colour of the night, most female Landers were gloriously adorned in expensive looking and smartly crafted dinner gowns with bags and shoes that fit; while the male Landers stunned in different traditional and corporate wears. The red carpet held at the main entrance of the auditorium and while that was on, unlimited jazz music and R&B instrumentals oozed out of the band members of the night even before the arrival of the band leader, Lekan Ogunyinka aka Omobaorun, De Eagle band had soared deep into the heavens of music and had taken the already seated Landers and dignitaries along.

It is the 50th anniversary of Maryland Comprehensive Secondary School (MCSS) and the Great Landers Alumni Association (GLAA) and so 50 tables were arranged to represent each set and each was duly tagged for easy access by the expected guests. Every Lander was led to their table in the company of the beautiful ‘ladies in red and a touch of black’ serving as ushers for the night.

The anchor of the night was MC Abulu and he wasted no time before he invited Professor Oremosu, a Lander who had become an icon in research and education to take the opening prayer. He did very briefly without wasting time and the event rolled on.

Some Landers and ex-teachers who had departed this sinful world didn’t fade away in the sand of time, they were still held in high esteem by their former colleagues, friends, students, families and acquaintances and they were fondly remembered on this very special night for all Landers, both living and dead. A minute silence was observed in honour of the dead Landers and former teachers.

SPECIAL DIGNITARIES OF THE NIGHT

Mrs Sylvia Abdalla is the Chairman of the GLAA Anniverssary Planning Committee. Her speech was very brief and concise but first of all, she appreciated GLAA members, dignitaries invited, her team members and most importantly, their teachers who had become mothers and grandmothers but still took out time to be with their ex-students. Some of the teachers sighted are Mrs Sam, Mrs Farinu, Mrs Emediola, Mrs Asenuga, etc. She reiterated the fact that the teachers have in no small measure shaped their lives. She further encouraged everyone to have fun as they travel back into memories with their old friends and former colleagues.

Lander Benedict Adigun was the first Senior Prefect of Maryland Comprehensive Secondary School (MCSS), and that was where he got the nickname ‘Espee’ from. He briefly welcomed everyone and explained how the journey commenced in 1979 but failed because as at then, the Landers were still trying to find their feet in the outside world. He explained the role the alumni played in ensuring that the name Maryland Comprehensive Secondary School was retained despite efforts by the missionaries to change it to St Agnes Comprehensive Secondary School. Furthermore, Espee explained the role MCSS alumni played in conjunction with alumni of other secondary schools in Lagos to see that the government returned all missionary schools to their rightful owners, which materialised in 2001.

He mentioned few people like Mr Kemi Thomas, Mr Joseph Ayodele, Late Gregory Ozoya, Mrs Tina Bakare, and some others who conducted the entrance examination as at the time the school was freshly returned to the missionaries. They also assisted in marking the scripts, collation of the results and then handed over to the newly formed school management.

In conclusion, he appreciated all the executive members, anniversary planning committee members, constitution development committee members and everyone who has contributed in cash and kind to GLAA. He closed his remarks by encouraging all the Landers to fully participate in the forthcoming election, vote the candidates of their choices and shun and discourage vote-buying wherever they are.

One of the side attractions of the GLAA gala night was the launching of the association magazine, the first of its kind. The Magazine Editor, Mrs Kehinde Apampa while speaking with City People revealed the essence of the magazine and the purpose it will serve. She said “we were able to get in touch with Landers all over the world and they also gave their inputs as to their experiences while they were in school. In addition to that, we were able to really round the current students for some details and encouraged them to join the alumni association as soon as they are done with schooling. Also, the editorial committee was able to get a lot of information which had been lost or hitherto hasn’t been compiled. So it was a compilation of a lot of information together in one booklet which will serve as a memoir for future references.” Other members of the editorial team,  Mr John Ogunnoiki, Mrs Funke Kehinde, Mr Remigus Okereafor and Mr Perry Tobi Tukuwe joined her on the podium as the magazine was launched.

Up next was the award segment for the great Landers who have had great contributions to the development of MCSS and GLAA, and their teachers who had impacted the great icons of today during their formative days. Some of the teachers and staff of MCSS awarded are Mrs Asenuga, Mr Philip Abiona, Mrs Adenike Nweze, Mrs Christine Otite, Ms Victoria Sam, Late Mr Anthony Omohera, Mrs Agnes Ireogule, and Mrs Morenikeji Farinu. The MCSS 1979 set paid tribute to their hero, late Mr Omohera as his son received the award on his behalf.

Some of the great Landers that were awarded on the night are Lander Benedict Adigun aka Espee, the first MCSS Senior Prefect, Mrs Agnes Taylor nee Kodeso, Members of the constitution development committee, members of the interim executives, Hon Ladi Lawanson, etc.

“The Education Trust Fund is to give every child an opportunity to go to school; I mean a very good school like Maryland Comprehensive Secondary School and we remembered that in the old days, in the 1970s, Mr Anthony Omohera propelled the school to greatness by tapping into talents and brought them to Maryland. We are going to build on that, we are going to tap into talents from primary school, those that would never have the dream of attending a private school and are gifted; we will start from them and give them the opportunity to attend Maryland Comprehensive Secondary School, a school they would never have thought of attending before. We will sponsor them to have a good and qualitative education,” one of the executive members said.

The chief launcher of the night was Lander Dr Francis Adelaja who was unavoidably absent but was duly represented by Mr Dapo Oguntayo. He launched the fund with the sum of one million naira. All the alumni sets from 1977 to 2003 were all represented in the donation.

The cutting of the cake was fun and interesting as Presidents of all the sets from inception till date came up to snap and partake in the activity. It was a step cake with GLAA ambiguously inscribed on it. It was fun all together as the band lived up to expectation from beginning to the end of the event; dishing out beautiful tunes both oldies and current vibes as everyone danced joyfully. It was indeed a grand re-union held in grand style.

READ ALSO: WHY I WILL MISS MY LATE HUSBAND, ADEKUNLE MI

The reason I Ran Away From Nigeria – Nnamdi Kanu