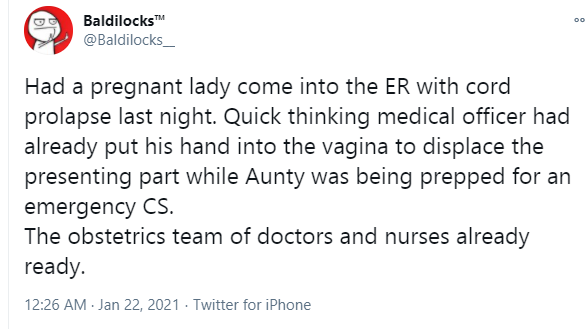 A medical doctor has narrated how a woman lost her child after insisting on calling her Pastor before going into the theatre for surgery.

According to @Baldilocks_, the pregnant woman came to the hospital with cord prolapse and was being prepped for an emergency Caesarean Section, but she insisted on calling her pastor.

The Twitter user further revealed that while they were explaining that it was an emergency, the lady was not having any of it and this led to the death of the baby.

Had a pregnant lady come into the ER with cord prolapse last night. Quick thinking medical officer had already put his hand into the vagina to displace the presenting part while Aunty was being prepped for an emergency CS. The obstetrics team of doctors and nurses already ready.

Theater crew ready. Just as we were about to go in, Aunty said she must call her pastor. We dey dial pastor, number no dey go. Aunty shouted to her husband “call Aunty Doyin”. Aunty Doyin is pastor’s wife. Aunty Doyin said we should all hold on that they need to pray.

We were explaining that it was an emergency but lady wasn’t having it. Consultant don dey vex. Me sef don dey vex. The other egbon whose hand had been in the vagina all this while don dey para. 2:00am everyone was tired & angry. We lost precious time cos of all the back & forth.

By the time we finally entered, we lost the baby. Aunty is crying, husband is angry. Aunty Doyin is comforting them on the phone saying it’s God’s will. See, having faith is important but having the common sense to know when something is an emergency is importanter.

Medical doctor narrates how pregnant woman lost her baby after insisting on calling her Pastor before surgery was last modified: January 23rd, 2021 by Reporter

How I Lost My Mom To Cancer...