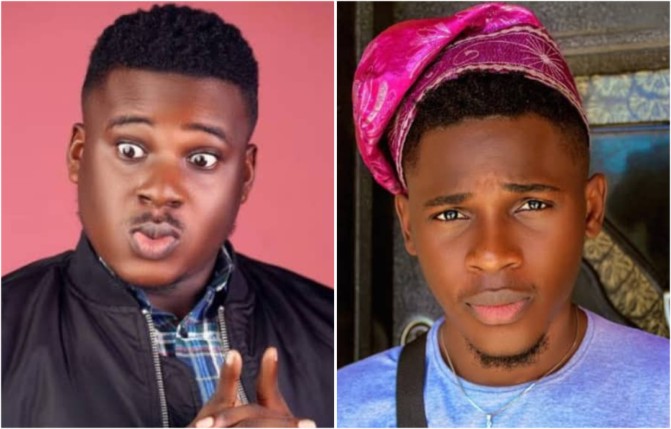 It’s no more news that social media is an avenue where lots of people both female and male make million and even become famous. While some are brand influencers, some others render different services like comedy, skits, buying and selling and some others and they make lots of money doing this.

Celebrities like Broda Shaggy, MC Lively, Mr Macaroni, Lawyer Kunle and a host of others became famous, influential and rich through social media.

City People’s Senior Showbiz Reporter, BIODUN ALAO brings you names of some other new and young guys, who are equally making waves on Instagram. And Tunde Ednut often promotes them on his Instagram page.

Have you heard of Boubou Nrang, an internet star from Dakar Senegal popularly known as Boubou Design, one of the outstanding young guy on the internet? He paints anything using whatever he can get his hands on.

He is very popular on the internet with lots of A-list stars within and outside following because of his skills and unique talents.

What about Doyin popularly known as viper the wiper. He is among the young guys doing well on Instagram with his skits and comedy.

His skits and comedy has attracted a lot of outstanding brands and he always advertise their products on his page.

What about ITK Concepts, it is a four-man comedy group from Port Harcourt. They are one of the fast-rising social media content creators with lots of followers on Instagram and Youtube.

They are also known for series of comedy skits revolving around Bible stories and the four-man group is made up of Ipally Ipalimote, Kush Emma, Don Pablo and King Thomas.

Twyse is an Edo born comedian who takes on multiple personalities and roles to reflect or explain what is happening in most Nigerian homes. The characters in his skits “Twyse & Family” comprise Sade, Tao, Mama Sade and Daddy Sade.

Mad Johny is known for mimicking people, while using their exact voice in his funny skits.

His mimicking Funke Akindele in 2018 shot him to limelight. Ever since he has become famous and doing well.

Igwe Uchenna who is popularly known as Sir One is one of the most famous Instagram comedian, content creator and actor. He is also very popular for dressing up in female attire in his comedy skits.

Emmanuel Chukwuemeka got famous with the comical name Mr Funny. He got popular through uploading a series of comedy videos on his Instagram page.

Ndukwu Izuchukwu Simeon who is popularly known as Simeone Skye is an Instagram comedian, dance artist and Wizkid impersonator. He exploited the hole, re-imagined his movies combined with innovativeness to make his more stages a one to looked for.

Kachi Iyeh the CEO of Masterpiece. He is a professional dance artist, choreographer, creative director, video editor, fitness guru and illusionist amongst other things.

Ismail Adebayo known as Isbae U is a popular Instagram comedian, social media personality and actor. He is known for his funny short skits.

Sydney Egere popularly known as Sydney Talker is one of the most outstanding and successful Instagram comedians whose skits has procured him a spot as a top shot in the entertainment industry.

Some call him “Towel Guy” a name he gained when he started releasing more Instagram skits while wearing towels to dance and make people laugh. He came to the limelight in 2016.

Emuze Clinton popularly known as Gentuu is a Nigerian comedian, actor and social media personality. He became a spotlight personality after releasing series of comedy skits using social media as a podium for showcasing his talent. Today, he is one of the most sought after social media comedians in Nigeria.

Colins Chukwu popularly known as “Shadyvile” became famous after mimicking American rapper Cardi B when she visited Nigeria. He is known for mimicking foreign music stars. He also often share some very entertaining skits on Instagram.

Ganiyu Kehinde popularly known as Ijoba Lande is a social media comedian motivational speaker, filmmaker and actor with a very large fan base on a different social media platform and he mostly uses Yoruba in his contents.

Chidera Uchegbu popularly known as Billionaire Prince while is a comedian, actor, on Air-Personality, singer and social media influencer. He is popular for posing as a billionaire in his comedy skits.

He started his career as a comedian at a ver tender age then later ventured into acting and shooting comedy skits.

Dike Osinachi who is also known as Egbeigwe Apama the comedian and Nollywood actor, though has been in the industry for a while now. He is among the current wave making comedian on Instagram, cashing out big time.

His skits and comedy on Instagram are one of the best, fans are always looking forward to.

Chidiebere Umeh popularly known as Anthonumeh is an Instagram and content creator. He started making skits in 2016 and progressing gradually. Today, he is one of the most sought after in the industry. He loves to use Bandana for his comedy videos.

He is the first male Isi Concept Ambassador that deals on skincare products in Nigeria.

Daniel Akindoye is the CEO of Ola Magic Touch, a celebrity massage therapist in Lagos. He renders different services and lots of celebrity ladies rush to him for his unique and outstanding services.

Efe Osemwota (Home of Lafta) is one of the best comedians on Instagram.

Xploit Comedy, comprise of four guys, Brizy, Chizzy, Lankz and Lenzi. They are a very vibrant group with over 300k followers and above that on other social media handles. They are among the wave-making guys on social media.

Gbadamosi Agboyor popularly known as MC Edo Pikin is a comedian, actor, compere, event planner and content provider. He is the CEO of Every Package Entertainment and also the producer and organiser of MCEdopikin Undiluted, an annual comedy show.

Kassim Braimoh is the founder of Yawa a short comedy movie brand. He was among the first set of people that started uploading skits online. He is a creative director, and content creator at Feempipo Limited.

Aghore Kingsley popularly known as Omo Balance is a Benin based movie actor, scriptwriter, comedian, entertainer and business personality. He has been in the movie industry for a while now. He is among the hardworking guys doing well for himself.

Clement Akpobome Ogudu became a household name with “Isoko Boy”. He is a social media influencers, blogger and comedian.

He is famous for his online comedy skits.