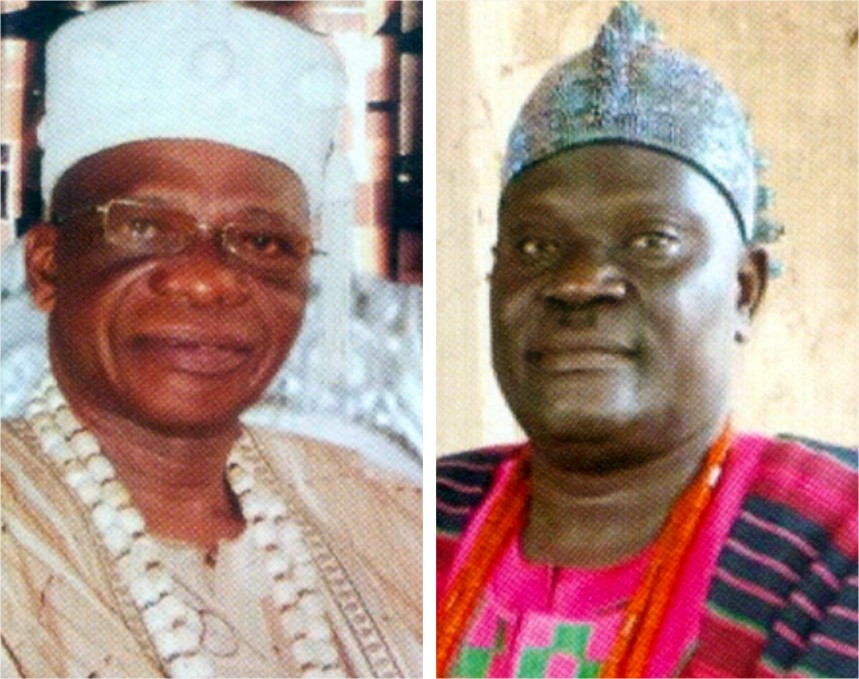 Talk of men of timber and calibre and women of substance in the society, Gbangonland is endowed. The town has done well in churning out quite a number of prominent individuals that are trailblazers in their chosen careers. They stand out in what they do as their sphere of influence is of great significance to the town and its people. They are indeed worthy ambassadors and remain the shining light as well as role models to indigenes of the ancient town. Below is the list of 40 prominent indigenes of Gbongan.

(1) HRM, Oba Dr. Adetoyese Oyeniyi, JP, Ph.D. (Ife), Odugbemi 1 is the 9th Olufi of Gbongan. He is well-read and one of the most revered monarchs in Osun State. The king has a strong conviction for truth. His unwavering refusal to compromise the truth is part of why the people love him. He is indeed an epitome of unquestionable character and moral compass for many people.

Oba Dr. Adetoyese Oyeniyi has made a great success of his farming and academic profession. He is a devoted Christian and his greatest hunger is to win souls for the Lord and to touch lives positively. He has used his resources to help the downtrodden among his people. Residents of Gbongan and its environs can boldly attest to the tremendous development in the town having spent just 24 years on the Olufi throne.

(2) Dr. Bolanle Olawale ABD RAUF Babalakin is a Nigerian businessman, lawyer and philanthropist, and the Chairman of The Bi-Courtney Group of companies. He is the son of late Justice Bolarinwa Babalakin. Dr Babalakin has considerable experience in litigation, arbitration, real estate law and project finance. Aside from being a Senior Advocate of Nigeria, he received the Nigerian national honour of Officer of the Federal Republic in 2007. Dr. Babalakin is the undisputed Oluomo of Gbongan Land.

(3) Prince, Chief Murtada Mofolasole Adeyemi Olounwa is a well-respected son of the soil and High Chief of the land. He is Omoyeeeloye of Gbongan, a title which befits him so much.

(4) Professor Adebayo Biala Williams is a great personality. He is an academic scholar, journalist, University teacher, literary critic, novelist, writer, satirist and journalism mentor. He was recently installed as the Asiwaju Otun Olufi of Gbongan, a ceremony which still remains the talk of the town. One can say fame runs in the family. Professor Adebayo’s father, Johnson Bolarinwa of the Gbongan/Modakeke stock, was one of Gbongan’s early political elites. Professor Williams has won many laurels, in Scholarship, Journalism and Creative writing. He is indeed a mentor and iconic source of inspiration for many generations of Nigerians who they look up to as a source of guidance and political compass.

(4) Prof. J.A.O. Ojewole is a reputable academic and researcher of international prestige. His research works have contributed tremendously to the academic field and humanity at large.

(5) High Chief Qazeem Onikepe is another prominent son of the land. He is the Balogun of Gbongan, a top and influential position among the traditional chiefs.

(7) Prince Dotun Babayemi is a bona fide indigene of Gbongan. He is the son of late Dr. Solomon Babayemi, Akinrinola 1; the immediate past Olufi of Gbongaýn. Omooba Babayemi, as many do call him, is the chief executive of Fort Knox Group with twenty-two thousand staff across the country. He has distinguished himself as a selfless leader and one with a heart for the less privileged with various empowerment programmes aimed at making his people live better life. Omooba is a peace-loving philanthropist, God-fearing politician of principle and equity as well as a security expert and corporate strategist. He is presently eyeing the seat of the executive governor of Osun State under the platform of the Peoples’ Democratic Party.

(8)  Elder Rufus Olawuni is an illustrious son of Gbangon and a highly revered personality in the town. He is a Member of the Gbangon Board of Trustees.

(9) Chief Saka Owopade is the President, the Association of Gbongan Progressive Elements. Ever since he assumed the office of the foremost group in the land, Owopade led Administration has brought landmark achievements to Gbonganland and its environs. The Contributions of the association in the development of the city cannot be overemphasized. Chief Owoade is a community champion whom the people are proud of.

(10) Architect Tayo Babalakin is an astute businessman with more than three decades of experience in rendering services in Architecture and Project Management. Architect Tayo Babalakin is a Trustee of the Victoria Garden City (VGC) Islamic Community. He is a philanthropist par excellence. As a consummate giver who believes in helping the less privileged in society, Arc. Babalakin has made life meaningful to a number of students. He has sponsored quite a number of them in Daywaterman College, Olashore International School and other institutions across the country.

(11) Alhaji Jamiu Irorun is a popular and highly influential Lagos businessman. He is indeed a proud son of the soil and does not hide this.

(12)  Dr Abiodun Layonu: Dr. Layonu is a Senior Advocate of Nigeria and the Principal of Abiodun Layonu & Co., a Lagos-based law firm. He is an alumnus of the London School of Economics and Political Science (LSE) where he had his LLM and PhD in Law. He has served on the board of several companies including Stabilini Visinoni Ltd. and Bi-Courtney Aviation Services Ltd. His passion for imparting knowledge has really inspired a lot of young professionals in discovering and developing their talents.

(13)  Professor Olatunde Makanju is an astute scholar and teacher of sports psychology at the University of Lagos. Then he became a sports psychologist for several national teams, including the Green Eagles, a technical official in the Athletics Federation of Nigeria, an administrator in some national sports federations (Athletics, Football and Volleyball) and the Lagos State Athletics Association. For almost 5 decades of his life, he has rendered service to sports quietly, conscientiously and meritoriously. He is indeed a pride for Gbangon town as a whole.

(14)  Professor Victor A. Adeyeye is a popular and well-respected scholar. He is currently the Director of Economics Policy Research Development, Nigeria Institute of Social and Economic Research (NISER), Nigeria.

(15) Dr Olukunle Ojeleye is a very intelligent and great personality. As a graduate of International Relations from the University of Ife, now Obafemi Awolowo University, he also holds a Master’s and Doctoral degrees from King’s College London, United Kingdom. He is highly experienced having worked at the defunct Standard Newspapers in Jos, where he created and maintained a weekly foreign affair features page. He subsequently worked in the United Kingdom for over fifteen years of which the last eight years saw him work in senior management positions with responsibilities for local government, social housing and urban regeneration projects. Dr. Ojeleye currently works as a consultant, providing functional and subject matter expertise in e-government, business process improvements, change management, project management and procurement.

(16) Hon. Olukemi Taiwo Oluga is a Nigerian politician. She currently serves as a Member of the Federal Representative representing the Ayedaade/Irewole/Isokan constituency in the 9th National Assembly. She is indeed a role model to the female folks who are aspiring to attain greatness in politics.

(17)  Chief Abiola Morakinyo is a veteran politician and the then Commissioner of Finance in Oyo State between 1979 and 1983. He is a close associate of the late Chief Bola Ige. The Octogenarian is among the prominent sons and daughters of Gbangon.

(18) Prince Hon. Adelani Ajanaku is a top property developer, and financial and business consultant. He was a Special Adviser on Economic Development to the Osun state Governor under Prince Olagunsoye Oyinlola between 2003 and 2007. He was also the CEO of Kajola Integrated Investment Limited.

(19) Chief Ezekiel Fatoye is an engineer of great influence. He is a strong force in the telecommunication industry in Nigeria and he has been up and doing for over four decades. He is an ex-Executive Director at NITEL and Multi-Links, Chief Fatoye is at present on the management team at Spectranet.

(20) Dr. Bayonle Ademola is a man with a remarkable track record of capacity building, youth development and humanitarian services. He is The Chairman and founder of the DAB Foundation.

(21) Barrister Kenny Ayanwale is the publisher of London based Entertainer International Magazine, lawyer, farmer and a Chieftain of the People’s Democratic Party, (PDP) in Osun State. He is proudly Gbangon indigene.

(22)  Bolaji Amusan is a popular Nigerian comic actor, filmmaker, director and producer. He is fondly called Mr Latin. He is the president of the Theatre Arts and Movie Practitioners Association of Nigeria.

(23) Chief T O Adegboye is the younger to late Professor Adegboye- Baale of the University of Ibadan. He is highly influential and one of the proud sons of the soil.

(24) Asiwaju Dele Momodu needs no introduction. He joins the list of prominent indigenes of Gbangon by the virtue of the fact that his mother, Madam Gladys Arike Momodu nee Fatoye hailed from the town. Momodu doesn’t hide his love for Gbangon and he shows it and speaks about it at every opportunity he has to do so.

(25) Chief Mrs Comfort Oni is a prominent and highly influential female figure in Gbangon land. She is a traditional chief and occupies the highly coveted Iyalode of Gbongan stool.

Meet 40 Prominent Indigenes Of GBONGAN was last modified: May 25th, 2022 by Jamiu Abubakar