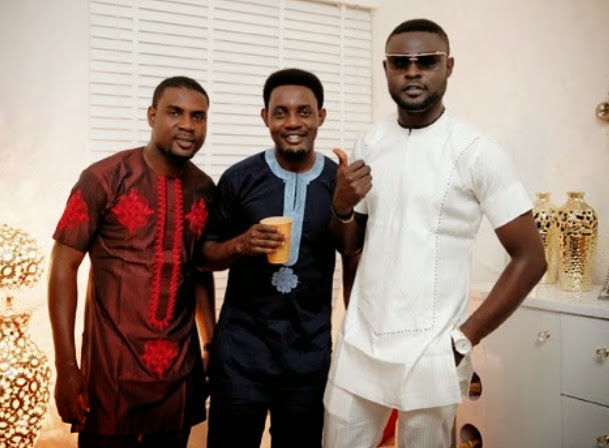 Popular Comedian Ayo Makun  known as AY and his two brothers Lanre & Yomi are very popular figures in the Nigeria showbiz industry, especially the eldest of the trio AY who is one of the hottest comedy acts rocking the scene. Ayo Makun (Ayodeji Richard Makun, also known by his stage name A.Y) is a multi-award-winning Nigerian actor, comedian, radio and T.V presenter, actor, writer, director and MC. Born on August 19,

He hails from Ifon, Ose local government in Ondo State but prefers to be known as a ‘Warri boy’. He is the host of the A.Y live shows and A.Y comedy skits. His first movie, 30 Days in Atlanta was produced by him and directed by Robert O. Peters. He was made a U.N Peace Ambassadorin 2009 after winning six awards in 2008.

He is the C.E.O of Corporate World Entertainment Nigeria.Ayo Makun attended Delta State University, Abraka. He graduated (after spending nine years) in 2003 as the most celebrated theatre arts student.

A.Y also won other awards such as the most fashionable student on campus (1999 and 2000); best show-biz promoter (2001); the most celebrated student on campus (2001) and the Jaycee club socio-personality award. Ayo Makun came into spotlight after being Alibaba Akporobome’s personal assistant and event manager.

A.Y also wrote going “A.Y wire” as a guest columnist in The Sun (Nigeria) and Gbenga Adeyinka’s “laugh mattaz”. His immediate younger brother and the least famous amongst them, Lanre Makun is an event specialist and the brain behind the famed AY Live Show which he has organised for close to a decade now.

He has also handled other big events including Akpororo Vs Akpororo. The youngest of the three musketeers is the famous fashion designer Yomi , the brain behind Yomi Casual. He started his fashion out, Yomi Casual in the 2007 and broke into A-list Fashion Designers in Nigeria when his bold and contemporary designs became the favourite of Celebrities in Nigeria and Africa.

His brand has clothed a lot of Nigerian celebrities and still counting. Yomi Casual is the official Clothier of AY and many more celebrities. He’s outfits were featured in the award winning 30 Days in Atlanta a movie filmed in Atlanta, USA and Lagos Nigeria. Yomi Casual is also the official Clothing Partner of AY Live Comedy & Music Concerts, and Shift Celebrity Prayse – an annual thanksgiving event for all Nigerian Celebrities.

Yomi Casual is an award-winning fashion Brand in Africa. One very common thing about these three brothers is their love for the light skinned and the three are all married to very pretty and light skinned women. AY who is the oldest of them all is married to a light skinned beauty Mabel who runs a top interior Décor outfit Midas Interiors. The couple met 14 years ago at the Delta State University when Mabel was still an undergraduate and AY was organising a Campus pageant.

Their affair kicked off from there and in 2008, they tied the knot. The couple are blessed with a baby girl. The second Makun brother Lanre also got married 2 years ago to another light skinned lady, Missiano, who runs a beauty parlour called Missiano. They specialise in all types of skin lightening creams and other cosmetic products.

The last of the trio, Yomi recently got married to his long time boo, Grace, another light skinned beauty and jewellery Merchant. She runs an upscale jewellery store called Fab Jewels. The engagement which held at the bride’s family house at Okota Lagos on Sunday had the 3 brothers present with their wives. The men settled for white agbada with teal green cap while their wives were garbed in green aso ebi.The newly introduced couple settled for a light and dark shade of blue.

Meet AY & His 2 Brothers Who Are Very Popular The Story Of The 3 MAKUN Brothers & Their 3 Wives was last modified: August 31st, 2017 by Vivian Onuorah