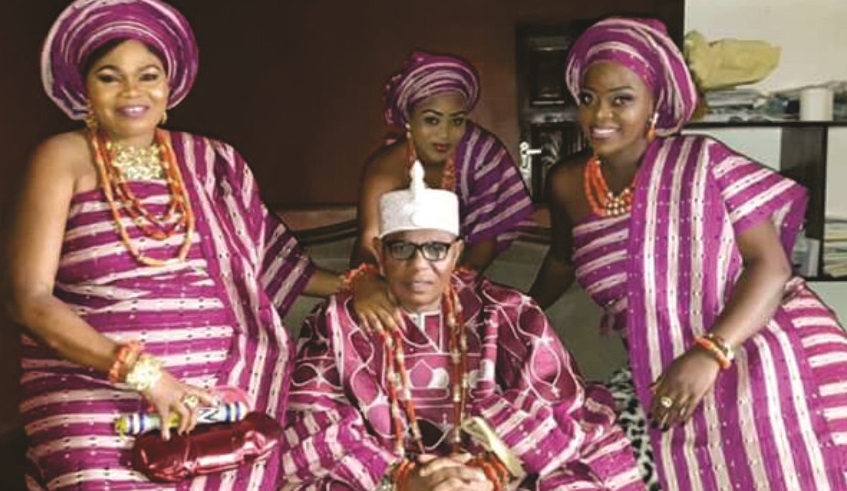 Talk of one stylish and sociable first class Oba in Ondo state, Oba Aladetoyinbo Ogunlade Aladelusi, Odundun II, the Deji and Paramount ruler of Akure Kingdom, name will be mentioned. Kabiyesi became the 47th Deji of Akure on his third attempt when he contested the throne on Tuesday 9th, June, 2015.  Kabiyesi was born and bred in Akure 62 years ago.

He had his educational background in Akure before he travelled to Baltimore, Maryland in the US. He had first  Degree and Masters in Architecture and Planning. This stylish monarch is blessed with 4 elegant Oloori’s. During the last Oyemekun Day,  stylish Olooris was looking radiant in their traditional outfit. City People Adeola Shittu unveil the pretty Olooris of Deji of Akure, Oba Aladetoyinbo Ogunlade Aladelusi, Odundun II, the Deji and Paramount ruler of Akure Kingdom.

Oloori Jumoke is the most senior wife of Deji of Akure whom he got marry to  in 1986, that is 31 years ago and the union is blessed with 3 successful children. Oloori Agba as she is fondly called is a Nurse and Health Educator at one of the Basic Health Center in Ondo City where she serves as the Head of Center. She is a dual citizen of Nigeria, her father is from Imo state, while her mother is from Idanre in Ondo state. This pretty and fair in complexion woman of style is in her late 50s.

Oloori Abimbola is the Eyesorun of Akure kingdom. She had lived for more than 20 years in Baltimore with kabiyesi. She is from  the Olugunshin of Igunshin Bale Akintide Gbangba family of Akure. She had her education in Akure before she travelled to Baltimore, Maryland. She oversees all kabiyes’s businesses home and abroad, aside that, she is also into the  medical field. She is, indeed, a damsel and a fashion icon. She is in her mid 40s. Her motherly role to the young Oloori’s stands her out in the kingdom. When she is in town, she graces functions with her husband, Oba Aladetoyinbo. Her marriage to kabiyesi is blessed with successful children, who shuttle between Nigeria and Baltimore in Maryland.

This elegant Oloori is the wife of Deji of Akure. She hails from Oka-Akoko in Ondo state, but she grew up in Akure. She is in her 30s. Oloori Kemisola is a graduate of Adekunle Ajasin University, Akungba Akoko. She did  her youth service in Ibadan. She got married to kabiyesi some months ago in a more or less low and secret wedding that was only known to close family members.  She is an epitome of beauty and blessed with black complexion and good stature. Oloori Kemisola marriage to Kabiyesi is blessed with a pretty daughter.

Oloori Oluwafunmilayo Titilayo Aladetoyinbo is the youngest and beautiful wife of Oba Aladetoyinbo Ogunlade Aladelusi, Odundun II, the Deji and Paramount ruler of Akure Kingdom. This pretty Oloori is a native of Iwo in Osun state, but based in Akure. She recently gave birth to a princess for Kabiyesi.