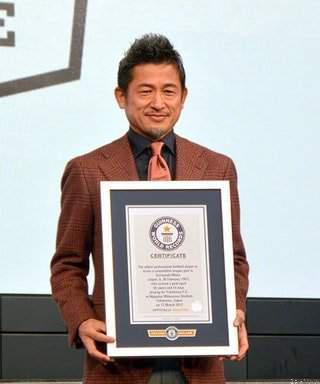 Another record was set in the world of football after a 50-year old man, Kazuyoshi Miura scores in a professional match, making him the oldest to set such a feat.
Miura says his new world record for oldest goalscorer in a professional soccer game will be short-lived.

The 50-year-old striker, known as “King Kazu,” received a plaque from Guinness World Records at a ceremony in Tokyo on Feb. 15.

“It’s my great honor, but I think this record will be shattered soon.”

Miura received the record for the winning goal he notched for his J2 team Yokohama FC during a match against Thespakusatsu Gunma on March 12. He was 50 years and 14 days.