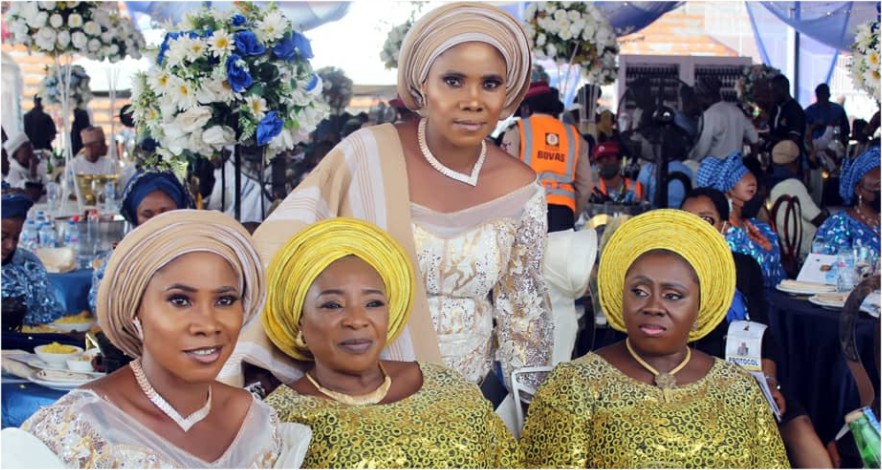 •How They Dazzled With LACE & GOLD @ Olubadan’s Burial

Have you heard of Classy Sisters before? If your answer is no then let’s quickly tell you about this unique group. Oluyole Classy Sisters is a group of successful women in the fabric business. They are the women of style dominating the textile industry in Nigeria.

Classy Sisters, as a body, was one of the many social groups who all came together, to promote the traditional value of Ibadanland and contributed their quota in giving Oba Adetunji a befitting burial. It was indeed a glamorous burial befitting a revered Yoruba traditional ruler of the late Olubadan’s status. The Obafemi Awolowo Stadium (formerly Liberty Stadium), Ibadan, venue of the ceremony was packed with dignitaries and celebrities who came from far and wide to honour the late monarch who during his lifetime was a successful music promoter and Chairman of Babalaje Records.

Political groups, social groups, religious bodies and many others whose mission was to pay homage to the late King were fully represented at the burial ceremony.

Classy Sisters was of the social groups that really stood out during the ceremony. They added colour and glamour to the party with their different styles. The women, whose symbol is expensive lace materials, gold and diamond, were the cynosure of eyes and the toast of the musicians at the event, who praised their group with mentions to their contribution to the growth of Ibadanland.

That is what the group is known for, they must make fashion statements at any event they find themselves. And that is why most top-notch parties in town are incomplete without their presence. Give it to these women, they know their onions when it comes to fashion style.

Why OGBOMOSO People Can’t Forget AKALA In A Hurry