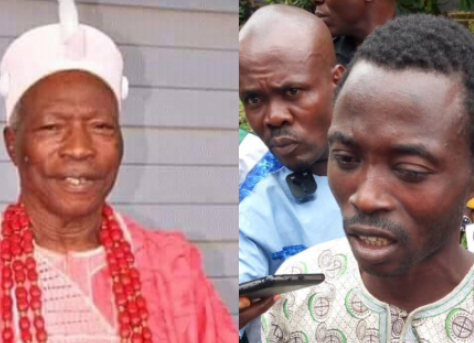 A 40-year-old mentally challenged man, Omonoyi Ademola, who stabbed the traditional ruler of Odo Oro Ekiti, Oba Gbadebo Ogunsakin to death on Monday August 20th, yesterday, Friday August 24th, confessed to the crime, saying he carried out the act to reclaim the throne.

Ademola who was paraded before newsmen in by the state police command, said he never knew the Oba would die when he stabbed him. He said he was informed by the spirits and his family that it was his family’s turn to occupy the throne and so he went to the palace to inform the king. Ademola who spoke with a very good command of English, said it was while they were communicating that the monarch attacked him and then he stabbed the monarch with a knife.

“I never went to the palace with the intention of killing the monarch,’’he said

Earlier, the commissioner of police had told journalists that he did not believe Omoniyi was an insane person going by his conduct and actions so far. According to him, it is illogical to think that a man said to be a mad person would kill a whole Oba with a knife and choose to escape into the bush and later travelled down to Ado Ekiti where he was later arrested.