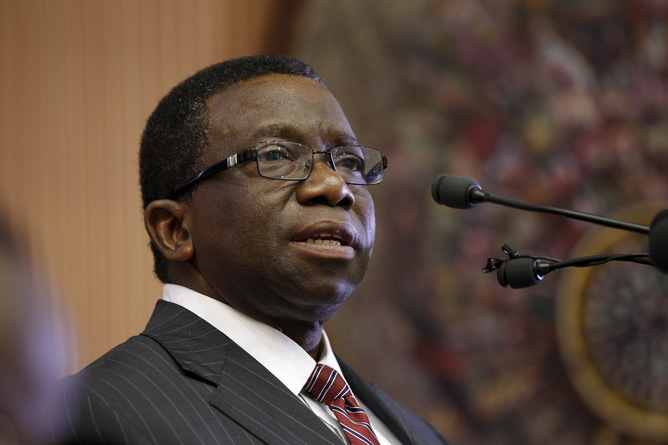 The Minister of Health, Isaac Adewole has debunked rumors that the military is involved in the vaccination exercise, adding that the Federal Government always takes the lead and would not conduct campaigns without involving the states.
According to him, “We are conducting vaccination is three states only. Yellow fever in Kwara and Kogi, Cholera vaccination in Borno”.
On the latest development in the monkeypox crisis, Health Minister quoted 74 suspected cases reported from 11 states.
12 tested negative and three positive from Bayelsa while four suspected in Lagos tested negative as well.
He added that there has been no new case of polio in 2017.
There had been reports that Nigerian Army was allegedly administering suspected harmful immunisation drugs against monkeypox disease.
But the military denied the claims in a statement Director of Defence Information, Major General John Enenche, said, the military has been in the global best practice of impacting on the lives of Nigerians through medical outreaches.
He said the quick impact medical outreaches are usually conducted during deliberate operations such as the war against insurgency and terrorism in the North East and routine training exercise like Egwu Eke II, also known as Operation Python Dance, in the South East among others.
“The practice of reaching out to the general public medically is akin to the key task of securing the lives and property of Nigerians. Therefore, it has and can never be done with an ulterior motive,” he said.
“Thus, Nigerians should be assured that the Armed Forces of Nigeria will continue to carry out its all-encompassing constitutional responsibility of “National Security” of which health security is inclusive.”
Major General Enenche also asked the public to ignore such reports, saying it was the plot of mischief makers to blackmail the military.
He said, “In specific terms, the campaign of calumny against the Nigerian Army regarding the outbreak of monkeypox should be disregarded. It is the machination of the usual mischievous and disgruntled human gongs who are always in the business of blackmailing the military for their myopic selfish interests.”
Minister of Health Talks on Military Vaccination Exercise, Debunks Rumours was last modified: October 18th, 2017 by Arinze Ago