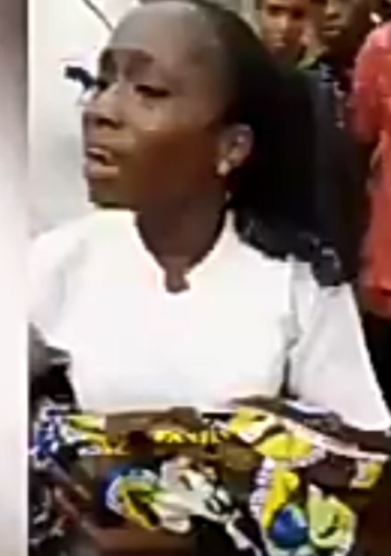 A nurse has been accused of stealing a newborn baby boy after she was found with the baby far from the hospital where she works and she was confronted by passersby who accused her of stealing the baby.

The nurse was seen standing by the side of the road, carrying a newborn baby boy with the placenta still intact. She claimed she was waiting for the woman who owns the baby.

However, bystanders didn’t believe her. They asked her to call the woman who gave birth to the baby on the phone, adding that they will not let her go until they see the woman she claims is the baby’s mother.
The spectators told her she stole the baby from the hospital and wants to sell it. But she insisted that she didn’t.
The man filming is heard saying that the nurse has no right to take a newborn baby out of the hospital compound and the only explanation for the nurse’s action is that she plans to sell the child.
When interrogated, the nurse said she works at Mother of Mercy Hospital & Maternity Okpoko.
Eyewitnesses claim she was on her way to sell the baby at Upper Iweka by Owerri Road in Onitsha.
Eyewitnesses warned that parents of newborns should be extra vigilant to avoid a situation whereby they are told that their baby has died, whereas the baby was stolen to be sold to a child trafficking ring