Home Sports Money is not my priority – Cristiano Ronaldo
Sports

Money is not my priority – Cristiano Ronaldo 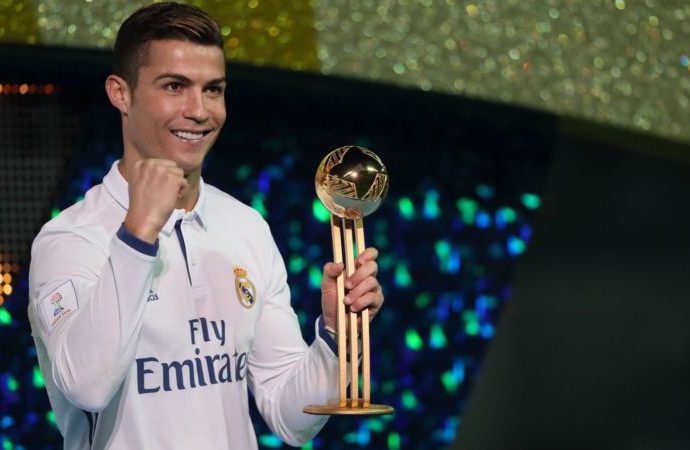 Real Madrid’s Cristiano Ronaldo has said that he is not motivated by money after the Portugal captain was linked with turning down a lucrative offer to play in China.

Ronaldo’s agent Jorge Mendes has said that an unnamed Chinese club were willing to pay Madrid a transfer fee of €300 million and give the 31-year-old an annual wage of more than €100m, but the offer was rejected as it was “impossible” for his client to accept.

Asked about being the world’s best-paid footballer in an interview on Egyptian TV channel On TV, the recently crowned 2016 Ballon d’Or winner said: “In my job I try to be the best, and I work for that.

“So this is important for me, to be the No. 1, the most valued player. But this is not my motivation. My motivation is to play football, to be the best, and this is what I try to do. I’m looking to money only as a means to become comfortable and independent after I finish football.”

In November, Ronaldo agreed a new deal which ties him to Madrid until 2021 when he will be 36, while he also recently signed a “lifetime” endorsement contract with Nike which reportedly could be worth as much as $1 billion.

Asked how he could keep his motivation going at this stage in his career, Ronaldo said he was aiming to maintain the form which has brought him two of the last three Ballon d’Or prizes.

“My target is to maintain, I have a few years more to play football,” he said. “I sign a great deal with Nike, a great deal with Real Madrid, so I am glad and I am blessed at my age to do two such huge contracts. For me it is unbelievable, I feel very proud for that. And of course it will give me more motivation to continue working hard. My job to maintain my level and to do what I like to do. I am so happy.”

Ronaldo was also asked how he finds a balance between his football and his growing business interests, which include his CR7 brands of clothing, footwear, fragrances and blankets.

“My team, the guys who work with me, are the best,” he said. “They work hard like me, outside football. Business is something I like and in the future I can see myself in that position. But now I have to focus more on football, as that is my job.

“In my team I have guys who take care of the specific areas for me. I like to know how the business is going, it is important, as when something has your name on it you should know about them – the shoes, the hotels, the blankets, the headphones, the fragrance, many things we have. I trust in my people.”

The Chinese Super League has seen a number of high-profile names make the move to the division, with Carlos Tevez and Oscar most recently choosing to play Asia.

Mendes’ claim about the record offer from China came as big names including Carlos Tevez and Oscar having moved to the Far East this month, following previous huge deals involving other stars such as Jackson Martinez and Graziano Pelle.

Asked in AS for his views on the potential power of the Chinese Super League, Spain’s foremost football economist Jose Maria Gay de Liebana said he had his doubts about sustainability, while adding that this was different to other Asian countries who had attracted aging stars with big money.

“It is a relative threat,” Gay de Liebana said. “I am following closely this issue of the offer made to Cristiano. But I am a bit concerned about the sustainability, as Chinese football does not have a history nor economic returns.

“I don’t know how long this can go on for. I have my doubts. With all the respect in the world, I don’t know where they can sell the Chinese league. Although the GNP of China is brutal, this is not like Qatar or Dubai in recent years.”

Money is not my priority – Cristiano Ronaldo was last modified: January 2nd, 2017 by Arinze Ago