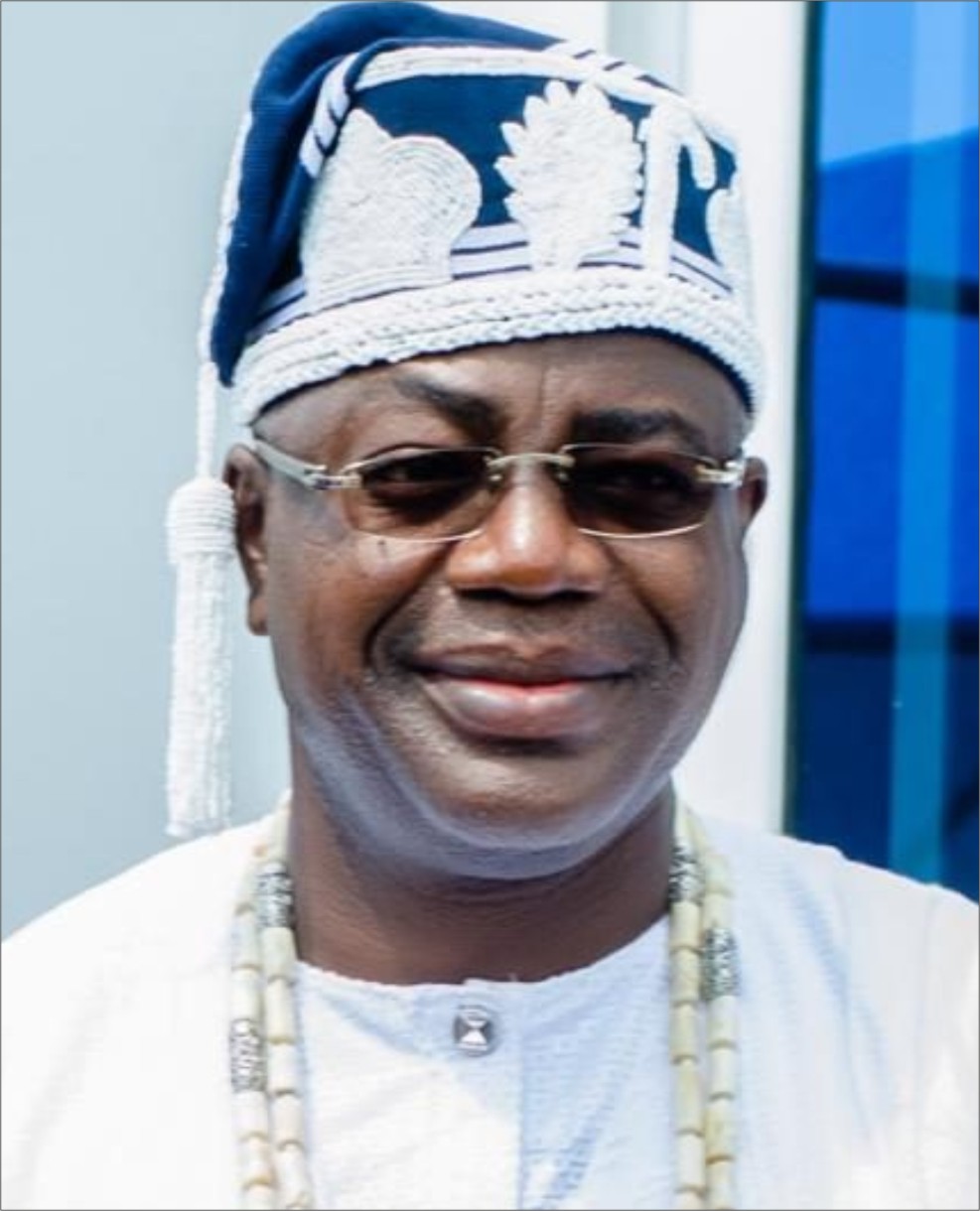 Have you noticed that many Yoruba Obas have stepped up their fashion style? Suddenly, their dressing has changed. These days, when they step out at parties and public functions, they always look a lot more colourful and glamorous in their dressing, from their crowns, royal outfits to their handwoven shoes and accessories, they all look glittering and attractive, reports City People Publisher, SEYE KEHINDE.

When His Royal Majesty, Oba (Dr.) Olufolarin Olukayode Ogunsanwo, the Alara of Ilara Kingdom, Epe Division, Lagos State, arrived the venue of City People Fashion & Beauty Awards on Sunday 30th May, 2021 all eyes were on him, on account of his sartorial elegance.

He looked debonair in his all flowing white Agbada and coral beads, as he alighted from his Mercedes Benz Limousine. He is tall and handsome no doubt, and has a carriage that is befitting of any king. Undisputedly, he is one of the best dressed Yoruba Obas.

He was chauffered driven into the Palace in a White Escalade that glittered in the scorching sun. Immediately he alighted, all attention shifted to the Akarigbo. He is handsome and very stylish and his outfits are always well designed and embroidered. And his carriage is always measured. He is one of the well dressed Yoruba Obas.

How about the Oluwo? Have you seen the way His Imperial Majesty, Oba Abdulrasheed Adewale Akanbi, the Oluwo of Iwoland and Paramount Ruler of Iwoland dresses these days? He has stepped up his fashion style. He calls himself the Digital King with the digital crown. “Feel it, you may love it or hate it. I rule with ideas…no more stagnation to customs, culture and traditional values of the Great Yoruba people”.

From his crown, to his Arabian-styled royal outfit to his handwoven shoes, he always looks glamorous and colourful. He says his look is the new traditional style of Yoruba king. Shortly after he came into office he changed his look and title to Emperor Telu 1. He likes to call himself the Arole Olodumare. He is now 5 years on the throne. Anywhere he goes, the Oluwo always looks colourful in his richly emrboidered Agbada and his encrusted crown.

Even more colourful is the Ooni of Ife, Oba Adeyeye Ogunwusi who always dazzles at any event he steps into. Immediately he came on the throne he stepped up his fashion style. For years now he has remained consistently consistent in his royal splendour. Whenever he arrives any event, he usually steals the show, with his retinue of about 20 traditional aides all dressed in White buba & Sokoto. They are usually the 1st to come out of their bus, before he now alights from his Rolls Royce Limousine or sparkling black jeep. He is usually dressed in a white royal ensemble, from his unique Oduduwa crown to his outfits, to his designer shoes and accessories that glitters. Ooni changed the look of royalty when he came in a few years back. He also carries a long staff of office, of about 8 feet which he holds anytime he goes to event. The Alaafin of Oyo, Oba Lamidi Adeyemi also dresses well. He has stepped up his dressing. His colourful Agbada are always richly embroidened and he never fails to wear his unique Abe ti a ja cap. Anytime you see the Alaafin step out with his beautiful Olooris he always looks flamboyant.

He has not let age slow him down. Baba is still fit as a fiddle at close to 90.

Oba Saheed Elegushi, is also an Oba who dresses well. He is a power dresser. He is young. He is vibrant. He is one of the Yoruba kings who has redefined royal style.

From his crown to his agbada, shoes and accessories he always stands out, just like the Oniru of Iruland, Oba Abdulwasiu Omogbolahan Lawal. Call him one of the best dressed Obas and you won’t be wrong. He likes silver accessories, from his rings to wristwatches and necklace. He wears very expensive fabrics. His Oloori ensures that Kabiyeesi looks good all the time.

Oba Fatai Akamo is also one king who has stepped up his fashion style.

He loves to dress well. Don’t forget that he was a fashion designer before he got on the throne. Oba Fatai Akamo is the Olu Itori of Itoriland.

One traditional ruler who also stands out in terms of dressing is the Olugbo of Ugboland, Oba (Dr) Obateru Akinrutan. Whenever he arrives at a function, you will definitely feel his presence. He is tall. He is handsome. And he likes to drape himself in expensive French lace fabrics that makes him unique always.

The Alake of Egbaland, Oba Adedotun Aremu Gbadebo is also a well dressed Oba. He wears well embroided white Agbada most times and carries it so well. Don’t forget that he was a well trained soldier before he came on the throne. He is one of those often referred to as an Officer and a Gentleman. He has not allowed age to dull his great sense of sartorial elegance.

One Oba who is also very colourful and flamboyant in his dressing is Oba Dr. Michael Ajayi, the Elerinmo of Erinmoland.

He loves Damask a lot. And he comes up with different designs.

Oba Olatunde Oginni, the Oludogbo of Idogbo is also a colourful dresser. He wears white a lot. He also has a great sense of pressence.

He is handsome. His slim physique makes whatever designs he wears to sit well on him. Lets tell you about 2 handsome Ogun Obas who relate like brothers. They are like twins. They are close friends. Both of them are stylish. One of them is the Alaperu of Iperu, HRM Oba Adeleke Idowu Basibo, and the other is the Ebumawe of Ago-Iwoye, HRM Oba Abdulrazaq Adesina Adenugba.

Both are handsome Obas. They are also well dressed. They always look truly royal in their outfits. The Alaperu’s slim figure makes whatever he wears to look good on him. The Ebumawe has a physique that commands respect.

Have you met Oba Owolabi Adeyemi Adeniyi, the Oba of Igbobi Sabe in Lagos State before? He is a very great dresser. He carries whatever he wears with royal splendour. He is always cool and calm. He is very cosmopolitan in his ways.

There is also HRM Oba (Engr) Nurudeen Oluwadare Osoja, the Onikogbo of Ikogbo Kingdom, in Ado-Odo, Ota Local Government. He is a very stylish Oba. He is always richly attired. He is an Engineer. He is into construction.

One traditional ruler who is also very stylish is The Agura of Gbagura, Oba Saburee Babajide Bakre. Ever before he became King, he has always been a man of great sartorial elegance. And he carries himself with a lot of dignity that will make you know he carries royalty in his blood.

Also stylish in his dressing and his ways is His Royal Majesty, Oba Omotunde Alaba Ebiyanmi Adako, the Oliyere of Iyere. Kabiyeesi is a man of great style. Whenever you run into him, he oozes style, from his crown to his billowing Agbada to his shoes.

So also the Alapomu of Apomu, HRM Oba Kayode Adenekan Afolabi, in Isokan LG of Osun State. He loves wearing all white from his caps to his royal outfits and shoes. Equally stylish is HRM Oba Akintunde Akinyemi, the Eselu of Iselu in Ogun State. He loves to dress well, just like the Olowu of Kuta Kingdom, His Royal Majesty, Oba Ahmed Adekunle Oyelude who is usually very colourful in his outfits. He has this dignifying look that endears Kabiyeesi to those who meet him.

Also very stylish is the Olugbo of Orile Igbon Kingdom, Oba Francis Olugbola Alao. He knows how to carry whatever he wears. He loves white, which explains why he is usually attired in all white from head to toe.

Another King who loves white is His Royal Majesty, Oba Dokun Thompson, the Oloni of Eti Oni and Promoter, Cocoa Renaissane Initiative. He is a man of simple taste but very classy in his ways. He is also stylish too.

It’s the same thing with Oba Adedapo Tejuoso, the Osile of Oke-Ona. He is usually in white. He mostly wears expensive lace fabrics and designer white shoes. He is blessed with a lovely skin that glows and he is ageing with grace.

We can’t forget The Olu of Ilaro, HRM Oba Kehinde Gbadewole Olugbenle who has always been a man of style even before he became a King. He is usually in white. By nature, he is a cool and calm person, but very deep.

How about Alaiyeluwa Oba (Dr.) Adetoye Alatishe, the Gbegande of Ososa? He is very, very stylish. He is tall and blessed with an ebony compexion that glows. The Russian trained Doctor is ruggedly handsome and wears a lot of lovely well embroidered Agbada. He has a signature hair style that he loves.

Also very stylish is HRM Oba Dr. Adeyemi Olanrewaju Adekeye (JP), the Abepa of Joga Orile. He always looks very colourful in his Agbada and caps. He loves to wear the Abeti Aja cap. He took after the Alaafin of Oyo in that regards.

There is also HRM Oba Yisa Olusola Adeniyi Olaniyan, the Onipokia of Ipokia Kingdom. Also very stylish is the Oba Ajero of Ijero Kingdom who will be celebrating 30 years on the throne.

There is also Oba Odo Olowu Ayepe and Oba Lateef Atanda Adams who was a top fashion designer before he assumed the throne of his forebears.

There is also HRM Oba Adedokun Omoniyi Abolarin, the Oragun of Oke-Ila in Osun State.

How I Developed A Strong Passion For Fashion – CHANNELS TV Presenter, ANNE NWAGHODOH

How Showbiz Stars Spend Millions To Be...