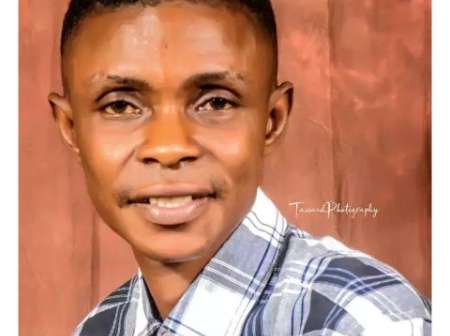 Nollywood actor, Quadri, popularly known as Sisi Quadri, is a Nigerian actor of the Yoruba genre, He is from is Iwo in Osun State in Nigeria.

Sisi Quadri has been in the movie industry for more than 2 decades. He is mostly featured in roles where he asserts his anger with his mouth. He was once tagged as an actor who is good at insulting others in movies.

Sisi Quadri has been recognized for his rare style of acting. He mostly acts, moves, and talks like a woman. He has also contributed to the movie industry in Nigeria. He is very talented.

He has stared in many Yoruba Nollywood movies, and was recently featured in a movie produced by Morili.

In this interview with Ojopagogo TV, Sisi Quadri explained how he got his talkative talent from his parents and how he has been able to cope in the movie industry, despite having a female shape and voice.

My name is Quadri Oyebamiji. Most people call me Sisi Quadri. I am a native of Iwo in Osun State. I had my primary and secondary education in Ore, Ondo State. I also have the basic Islamic knowledge in Iwo after a left Ore. I am also a trained fashion designer. I have trained and graduated over 25 artisans under my tutelage in tailoring. My fashion designing job did not in any way affect my acting profession, as I still have about 6 apprentices training under me.

I started acting over 20 years ago. And I thank God for his blessings so far. Whatever profession anyone is into and he’s able to build a house is worth thanking God for. I am no longer an actor that other actors will be soliciting for support on his behalf after death. I have built my house and even built my grave in it, just in case. We all pray for a long life though.

But acting is a profession that I cherish, and it’s God’s mercy that we have been enduring in the industry. You know most people don’t know the treasure they carry until it’s lost. It is my prayer that we don’t lose our treasure in our chosen careers. And I also pray that God gives us all long life to keep entertaining our fans. I also pray for God’s blessing. You will not go blind by God’s grace.

My journey in theatre is very wide, I started with a makeup artist. At a point, when I started attending location consecutively, I had to dump costume jobs, and get into acting fully.

I started acting in 2002, when Alhaji Ajileye wanted to act Koto Aye. That was when I started. Back then, I didn’t see it as a serious job, because I was a full-time fashion designer with about 23 apprentices and I was doing well.

Late Chief Kokosari. Was my uncle and he used to rehearse beside our house, and I used to marvel at their crafts.

By the time I picked interest in the profession, I met with Toyin Olaiya, who is a lecturer at Ila-Irogun College of Education. He was working with Chief Ashafa Elegbo. The very first time I joined the industry was when they wanted to shoot a movie. May God bless the soul of our mother, Alhaja Amidatu Ashake (Mama mi L’eko), she was the one who also recommended me for a role in the movie. That was how I was absorbed into the group.

Again, one of my brothers, Muyideen Lala, insisted that I also delve into other areas of the movie industry. She personally paid Yinka, and Yemisi Elebolo and instruct them to train me on makeup. That was how I started acting and doing makeup.

What was the experience when you started?

Probably because I have a side hustle that I fall back to, I don’t really know the challenges in theatre. This is why it is important for anyone going into the movie industry to have something by the side to keep up, so when you are not getting roles, you can survive. I had many people working for me in my shop and I was using the money I get from tailoring to fund my acting career. If you don’t have other jobs aside acting, you will hawk in the end. You will pay the group due, you will buy clothes, and some other bill that the troupe will levy on you. This thing we call age is a ladder, death can meet you at any level you get to. So there are bitter and sweet experiences in the beginning, but because I had two streams of income, it was not too difficult for me.

Today, the theatre has paid over 300 percent of what I have invested in it with my tailoring job because now I also to MC at major parties.

Did you build your house with yours earning in theatre?

I swear with all that I have, it is the money I used to buy land and build the house. There are lots of blessings in the theatre profession if you are prudent. For me, I don’t drink, I don’t smoke, I don’t mess around with women. Whatever I get, I deposit. And theatre is pay-before-service.

When was your saddest day?

The one I can say that I recollect is when one of my bosses was working on a movie project in Oshogbo, and I told him I will love to be part of the movie. I travel from Iwo to Oshogbo for ten days, but he didn’t even give me a WAKA PASS. I felt so bad I considered quitting.

Many years later, the same person called me and told me he wanted me to shoot 15 scenes for him. This time I turned him down. I rejected it totally.

What stands you out from other actors

The difference is the impression people get that I behave like a woman. But that is because no one had followed me home. If anyone has followed me to Alhaji Jimoh Oyebamiji, who is my father, you will see that we are all the same. We are all alike and we don’t see ourselves different from any man. Also from the way I talk, I am just as simple as anyone, it is when I get on stage to act that some of these skills manifest itself. Sometimes when I watch my movies, I also don’t like how I insult people. Sometimes the insults are so much that I would have to turn off the TV.

My parents talk too. My father and mother talk a lot, but I only spiced my own with insults. I can make the most beautiful lady in the world feel so ugly and unattractive, and I can also make an ugly woman feel on top of the world, it’s a matter of tongue.

When was your happiest moment?

It was when my elder sister gave birth after carrying the pregnancy for 3 years. She gave birth September 27, 1997. I was so happy that I rolled on the floor and had wounds and cuts all over my body, but I didn’t feel it until after 3 days. I was happy because we have taken her to many hospitals and they insisted there is no baby inside her tummy. The doctors said they need to evacuate the stuff in her belly because it is not a baby. The boy is very big now.

Do you know a celebrity called Bobrisky?

Bobrisky? Who is he? Is he singing or into the theatre? I might have heard the name but I don’t know him or what he does. I’m sure if you ask him too, he may not know me.

Can you dress as a woman?

God forbid bad thing. God has said that all the created is perfect. God has wonderfully made me. And my uniqueness has paved way for me. I cannot recreate myself because I want to make money. We won’t stay forever here on earth. The reward is now from the earth. We will all get the reward for good and bad deeds. There is nothing that you do, that you won’t get the reward.

I don’t know anyone anywhere, and whoever feels he’s seen me anywhere, let him come and accuse me. I don’t club, I don’t womanize, I live here in Iwo and only go to Lagos if I have any job. Maybe if I was an outgoing type, I would have become something else, but I have disciplined myself to live within my means.

Most Producers Cast Me Because Of My Feminine Shape & Voice – Yoruba Actor Sisi Quadri was last modified: October 5th, 2020 by Reporter