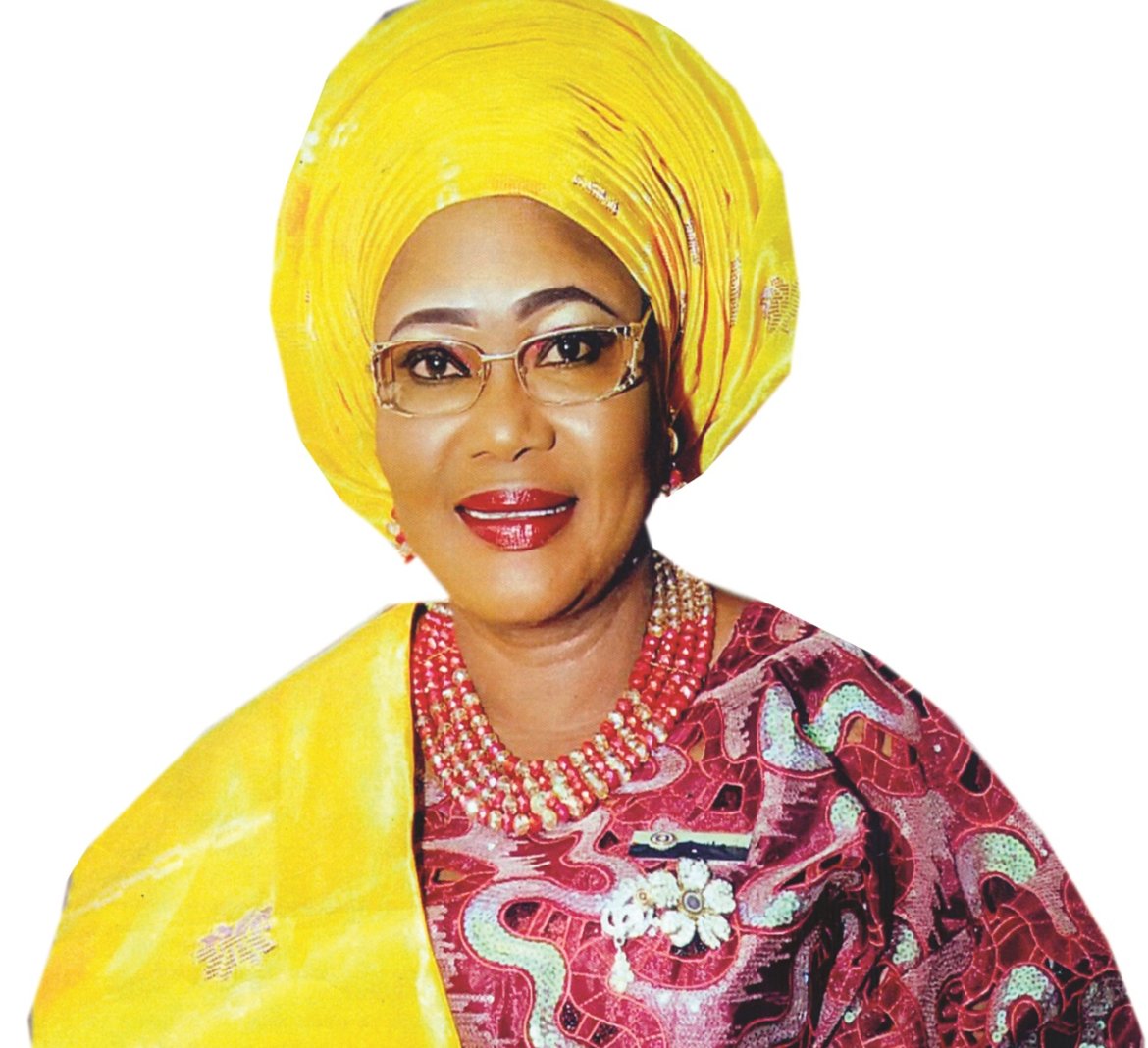 On Sunday 23rd, July 2017, the Inner Wheel District 911 Nigeria had a new District Chairman installed, at a very classy event held at The Summit event centre, at Agidingbi area of Ikeja. She is IWM Adegbemisola Fathiat Amoke Rufai, a serving Director with the Lagos State government. She is coming in as the 34th District Chairman.

For those who don’t know, International Inner Wheel is one of the  largest Female Humanitarian Service Oriented Organisation. It is a non-governmenal, non-profit making consisting of distinguished and highly esteemed ladies who are committed to the cause of caring for the less privileged in our society. The fatherless, motherless, widows, widowers, orphans, physically challenged, the down trodden, hip replacement surgery for indigent people with sickle cell disorder, breast cancer awareness etc.

It was formed in Great Britain by Mrs. Margaret Oliver Golding a wife of a Manchester Rotarian. Presently it has a membership of over 103,000 with 3895 clubs in 103 countries and 173 Districts across the world.

District 911 has 33 clubs out of the 66 Clubs in Nigeria and 370 members out of the  764 members. The leadership of the District changes hand Annually (1st of July 20 30th of June) and by the Grace of God Mrs. Adegbemisola Fathiat Amoke Rufai a serving Director in the Lagos State Public Service, will be installed as the 34th District Chairman she would be steering the wheel of District 911 for the Inner Wheel Year 2017/2018 having served at various capacities at the club and district levels. More so, 2017/2018 is tagged as the Double Golden Year of Inner Wheel in Nigeria.

The installation was so run as a fund raising event. The proceeds realised will be spent for our Humanitarian Projects that will alleviate the suffering of the less privileged people in our society.

Projects for the year are as follows:

Who is the new Inner Wheel (District 911) Chairman? She is IWM Adegbemisola Fathiat Amoke Rufai (nee Aina-Balogun) she was born 4th August 1959 at Oko Awo, Lagos Island to Pa Sunmonu Amusa Aina, whose father hailed, from Tulebe Balogun Dodondawa Compound, Ibonwon, Epe and his mother from Isoku in Ijebu-Ode, while her mother Alhaja Osenatu Ajoke Aina (A.K.A. Alhaja Olorunkemi) was born into the royal house of Mohammadu Sanni Aderibigbe Ishola Gbongorbioko Ruling House in Offa and her mother a Fulani Princess from Ojoku both in Kwara State, they are both of blessed memory.

‘Gbemisola has large appetite for knowledge and  education. For almost 40 years (1968-2008) she went through various Schools/Institutions of learning- Primary, Secondary and Tertiary Institutions. In all of these, she was exposed to varied Training and Vocational Institutions, which have made her a well-rounded, intelligent and experienced HR Practitioner, below are details:

After the compulsory National Youth Service, she was engaged and has since been serving the Lagos State

Government. Her services, over two’ and half decades has exposed her to workings in various ministries

including education, as listed below;

Apart from large appetite for knowledge, she is naturally gifted in cookery and culinary works, this she demonstrates domestically and even professionally as reflected in the fortune of BOBI PARTY MART.

She is a dedicated social worker, meticulous organizer of youth activities and is widely travelled (Locally and

Internationally) both in her professional life and in Inner Wheel, attending Inner Wheel Conventions.

She is a workaholic, a goal-getter, ambitious but  diligent in delivering her responsibilities, obedient Civil Servant a full Director who readily mentor, teach and lead her subordinates in achieving greater heights. This had earned her two letters of Commendation in the Service of Lagos State Government one on 9th November 201 0 and a recent one on 10th March 20 1 7.

She had equally won several awards in Inner Wheel due to her goo. human nature and ready to work

attitude. The Awards are listed thus:

She is happily married to her husband of over 30 years-

Rot (Arc) Abiodun Rufai. The marriage is blessed (amongst other things) with Two Sons and One Daughter. They are Arc. Damola Rufaii, Chartered Acct.  Adunni Rufai, and Arc. Toluwalase Rufai. ‘Gbemisola radiates warmth and love around her family/space, she equally enjoys tremendous affection and support from

her husband and the children, extended family members, friends and colleagues also cherish the joyful

ambience and camaraderie she creates around her environment.

IWM Gbemisola Rufai loves watching movies, listening to music, gardening and assisting the needy in the society. She is an extrovert, a team player/leader, makes friends easily and has global views on issues.

At the installation, she revealed her plans. “It is with honour and humility that I stand here before you this beautiful day Sunday 23rd July, 2017. I will say it is ALLAH’s appointed day as such I acknowledge with great enthusiasm your good wishes for me by witnessing my Installation as the 34’h District Chairman of this great Club for year 2017/2018 which coincides with the 50’h year Anniversary of INNER WHEEL in Nigeria thus: made it The Golden Year with the ,Theme-”Leave a lasting Legacy”. Together with my Executives we shall carry the flag of togetherness, hardwork,

leadership and encouragement to greater heights by enlarging the appetite of goodness and forthrightness in our society and by touching the hearts of the needy in such a way that it will “Leave a lasting Legacy” in our tomorrow for the less privilege. From my profile you have seen that I have traveled the length and breadth of Nigeria as an Inner Wheel Club member and had held various posts at various times within the club level and the District Level to carry out humanitarian responsibility within our society. The experiences gathered from various posts held and societies/people interacted with over the years will surely spur me into positive action throughout the tenure of our administration.

From the Theme for the year “Leave a lasting Legacy” we intend through the Star Projects to execute the following programmes:

(1.) Training and empowerment of Youths and Women: Establishing and leaving a lasting legacy by training Youths, widows and the vulnerable In our society the training sessions will lead to good  citizenship and economic empowerment.

(2.) Also Health Talk/Safe Schools: With recent  happenings in our society on kidnapping of school  children we intend to establish rapport with the students, teachers and parents by going to school with this project through the method of “each one teach one.”

creating a Road show that entails walking through the city of Lagos and Abeokuta. Television and Radio

Programs/Shows geared towards educating women about Prevention, Management and cure for Breast

Cancer shall also be organized.

All these we cannot do alone. We therefore seek for your assistance by donating generously to these our humanitarian projects to alleviate the suffering of the less privilege in our Society.

I am delighted to inform you that this Inner Wheel year is  tagged the GOLDEN YEAR hence the Chairman is given the title Golden Legacy Chairman so also and her Executives are called Golden Legacy Exco. For this singular honour we will appreciate that you donate generously as this year will be witnessing the Renovation of our Vocational Centre, at Amuwo Odofin which we intend to showcase to our International Inner Wheel President on her scheduled visit to Nigeria in April 20 18.

She is a great ambassador of District 911 Nigeria and indeed of Africa, we are proud of her achievements and records of  service. We cannot afford to lower the standards set by our predecessors.

Conclusively, it is a service-year loaded with programmes and activities which my Executives and I are passionate to execute to the Glory of God and Service of Mankind. Needless to say that your moral and financial support will go a long way not only to ease our tasks but will assist us in leaving behind  incredible “lasting Legacies” for our society and humanity at large.  Please join hands with us and together we can create a Happier Future By His Grace.

To everyone here present today and all those who would have been in this hall too but for one reason or the other were not able to make it I say thank you because without you all today cannot be a success story. To all my beautiful inner Wheel sisters in service and especially the College of Past District Chairmen my deep appreciation to you all, you are wonderful. Immense gratitude to our awardees, distinguished guests of honour and the Kabiyesis.

To my darling husband who has been the solid pillar of support and blessings to me, words cannot describe your love and will to make this occasion a success. I cherish your unflinching support always thank you LOVE. My children for being there to back and pray for me all the time “MOMMY G” says thank you for your love and my sisters and brothers on both sides of my family THANK YOU.

How To Vote On FirstBank-Sponsored The Voice...