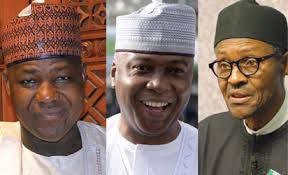 The President of the Senate, Bukola Saraki, and the Speaker of the House of Representatives, Yakubu Dogara, have released a joint statement in which they described the invasion of the National Assembly by security officials as a “coup against democracy.”

Saraki and Dogara condemned the invasion of the sanctity of the legislature and the harassment of staff and legislators by officials of the Department of State Services as another attempt to subvert democracy.

They noted that the heavy presence of armed security men who unnecessarily militarized the legislative complex and harassed legislators and the workers in the complex could not be justified in a democracy.

The statement reads, “By 6.30 am, the reports started coming in and by 7am, there were pictures and videos online showing armed security men preventing senators and honourable members from coming into the complex.

“Some of our colleagues then mobilised other members in both chambers from their respective abodes so that they could pressurise the security men from allowing them to gain entry.

“Obviously, the public outcry from Nigerians and members of the international community against this illegality, this desecration of the sanctity of the legislature and this flagrant abuse of powers forced the government to relax the directives given to the security men as they later allowed the legislators to walk from the main gate into the foyer.

It added, “Still the lawmakers were not allowed to drive in, in their vehicles and were denied access into the main building housing their offices.

“It is not clear what the plan of the government is but information reaching us indicated that some senators who are pro-executive arm are being camped somewhere here in Abuja and they are being compelled to sign an impeachment notice that would later be brought to the Assembly complex.”

The two presiding officers appealed to Nigerians and members of the international community to view the development as “a coup against democracy.”

They described what happened at the National Assembly complex on Tuesday morning as a throw-back to the inglorious days of military rule where dissent was not tolerated and freedom of association and other fundamental human rights were willfully and carelessly violated.

They expressed gratitude to senators and their counterparts in the House of Representatives for standing up to be counted in defence of democracy and the rule of law by resisting “this coup against democracy.”

Senator Rafiu Ibrahim (PDP, Kwara South) alleged on Tuesday that lawmakers under the aegis of Parliamentary Support Group were given US$1m each to impeach Senate President Bukola Saraki and his Deputy, Ike Ekweremadu.

The lawmaker said this in an interview with reporters at the National Assembly on Tuesday.

His allegations could however not be independently verified. None of the leading members of the Parliamentary Support Group for Muhammadu Buhari could be reached for comments.