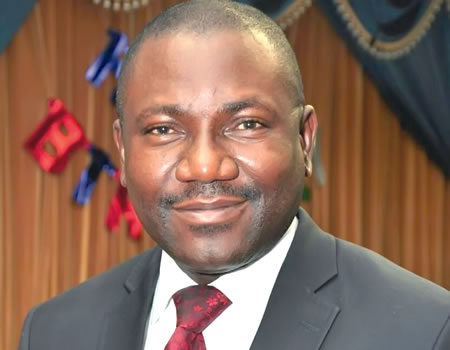 Two Saturdays back, a big and classy party took place in Lagos. It was the 50th birthday of Pastor Olalekan Oso, a Security Consultant. He is also one of the Jubilee Pastors of the Redeemed Christian Church of Christ. The party which was held at Class Events Centre, PHCN Quarters along Adelabu Street, Off Masha road in Surulere on Saturday, October 28th, 2017 was well attended. From mid-day, the well decorated hall began to fill up with family members, church members, Ministers of God and his friends.

Of course, there was Praise & Worship Testimony, Choir Ministration and lovely hyms to garnish it. Who is this ever smiling Manager of Datlex Nigeria Ltd, a successful security company that provides security solutions to his clients problems.

Pastor Olalekan Oso was born on 23rd of October, 1967 to a very noble family in Ijesa Isu Ekiti. Growing up with his grandmum, Madam Abigail Simisola Oso of blessed memory was the best that can happen to a young of his generation. He was well cared for, tutored in native intelligence, domestic chores, kitchen techniques and sundry activities that later transformed him into a complete man.

Although, he never lived with his mother, the influence of his mother’s profession teaching rubbed off on him. At a very tender age, he was introduced to the classroom where he used to write “jagajaga” on the chalk board while sitting on the neck of the senior pupils in his mother’s class. He matured so quickly that it was difficult for people to believe his age as he was competing favourably well with people that are far older than him. He has a total commitment to excellence and has never been given to indolence. This encouraged his late uncle who was a soldier to get interested in him. His acquaintance with the Military and barrack life has been a source of motivation and inspiration for his eventual choice of security as a profession.

His schooling also prepared him. How you may ask? In 1972, Lekan was enrolled at Hosannah African Church Primary School II, Ijesa Isu, Ekiti. At that very tender age, he began to show interest in Western education at a time when children of his age still loved to remain under the protection of their parents.

His admission in 1978 to the famous African Church Comprehensive High School, Ikere-Ekiti, otherwise known as the school without failure under the tutelage of late Chief Oyewole Jegede (MON) marked the beginning of his outstanding educational pursuit.

Lekan was truly outstanding despite his very small stature. He combined academics with sports and enterprise. He played  football and was a strong athlete while growing up. The young man was very vocal and could easily be noticed in any gathering. At a time when only students that could speak English dared talk in the classroom, Lekan’s voice was everywhere.

He became the class captain in class four where the leadership qualities in him began to manifest. His love for Agriculture led him to the Federal College of Agriculture, Akure (then known as University of Ife, Institute of Agriculture Research & Training) where he obtained his First Diploma in 1988. His excellent performance in the college motivated him for further studies at the Lagos State Polytechnic where he obtained a Higher Diploma in 1992.

The University of Calabar was his next stop where he obtained a Post Graduate Diploma in Management. His quest for further education and love for the Engineering profession led him to the Federal University of Technology, Akure.

Lekan is one of the best trained men of his generation haven been able to traverse through Agriculture to Engineering and Management. He however, put a temporary stop to formal education after his Masters of Business Administration (MBA) from the Federal University of Technology, Akure when he had to combine his daily expanding secular business with his ministerial call.

How did he become a Pastor? As a little boy while growing up with his grandmother, Lekan was introduced to the church. Attendance of early morning prayer at the Hosannah African Church, Ijesa Isu was compulsory, whether convenient or otherwise. His involvement in school drama always saw him play the role of a priest. However, youthful exuberance and peer pressure from his associates did not allow him to understand the call of God early in life.

His marriage to Omodunke in 1996 later brought him back to Jesus Christ when he fully tasted salvation at the Redeemed Christian Church of God, Chapel of Solution, Afisi under the leadership of Pastor Joshua Abejide. Pastor Abejide was the man who God used to introduce him properly to Jesus Christ. He made him his disciple and followed up until Pastor Bayo Ogunmakin took over from him. Being a professional teacher, Pastor Ogunmakin introduced him to the Bible College and the school of disciples.

By the grace of God, Lekan is an alu mni of the Redeemed Church Bible College and the School of Disciples. He was called as counsellor and by the time he got his first ordination as Deacon, the call of God was evident in his life. He was later appointed Parish Pastor. By the grace of God, he has had the privilege of pastoring several Parishes of the Redeemed Christian Church of God.

Lekan is a Jubilee Pastor haven been ordained as full Pastor during the “Come Up Higher” Convention and God really proved the call. He is today Pastor in charge of Zone at the New Jerusalem Assembly of Lagos Province 8 under the leadership of Pastor J.A. Adeyokunnu. Lekan is being used by God to build men and places of worship for the expansion of our father (God) kingdom.

How did his career start? Upon graduation in 1992, he was invited by his brother and mentor, Mr. Tunde Ajiniran; to come and join Tunde-Davies Enterprises. He was absorbed into Tunde-Davies Enterprises where he started working with his brothers Messrs, Femi Ajiniran, Tunde Ajiniran and Akin Fasae. Upon transformation of the company to Datlex Nig. Ltd, he became the Pioneer Head of the Technical Support Services.

Lekan has been with the company since then and rose to become General Manager of the company. Even though he has had the privilege to work in other places as Petrol Station attendant, Hotel Manager, Farm Manager and Eleganza Industries, Oregun as factory worker and later Quality Control Officer, none has been as eventful as Datlex Nigeria Limited.

He has spent half of his entire life working with the company. The nature of the job exposed him to every nook and corner of Nigeria and the world at large. He is bold to say that he has travelled to every local government area of Nigeria and every continent of the world. His marriage to Omodunke, an astute business woman and Chief Executive of Demto Golden Concepts and Great Manuel Nig. Ltd has ensured that he remained in the business community.

God has helped Olalekan to put to use, his classroom training that cut across various discipline in the management of Datlex Nigeria Limited which is also a multi faceted organisation. He has had the grace to be trained in the installation, maintenance and management of several security equipment from the World’s best professionals in the United States of America, United Kingdom, Italy, Germany, China to mention a few.

At a time when armed robbers turned the banks to their wardrobes going there at will to take whatever they wanted, God raised his team, together with the team, they pride themselves as the manufacturers of the FIRST Indegenous truly burglary resistant safes and strong room doors. The team installed the first fully electronics anti-robbery entrance door in any Nigerian Bank.

Lekan is an Alumni of CIMA in Italy, Dallmeier, Germany, Acetech Italy, South West Microwave London and several other security institutes. He also belongs to several standing church committees where God has helped him to make his mark.

His marriage to helped on 21st September, 1996, he was joined in holy matrimony with his hearthrob, Omodunke Falana. Haven met her in 1993 during his youth service at Osun State College of Education and was well accepted by the  family especially the father Pa Joshua Adeleye Falana of blessed memory who embraced him as his child during their first meeting. The marriage is blessed with promising children Emmanuel Oluwasanmi,  Abigail Ikeoluwa and Abraham Oluwatimilehin. To the glory of God, the union have been a model to several other families both at home and abroad. In fact the marriage motivated a number of his friends into marriage and today, they are all grateful to God.

In the early days of his life, he was a Sports Man, who was totally committed to sports especially football and athletics. He loved reading and writing. Today, only 2 things occupy his mind-security & safety and soul winning. Lekan’s interest in Security and Safety cannot be overemphasized, everywhere he goes to, he thinks security and discusses it with passion. His major interest now is to use all God has given him to take the gospel to the next level.