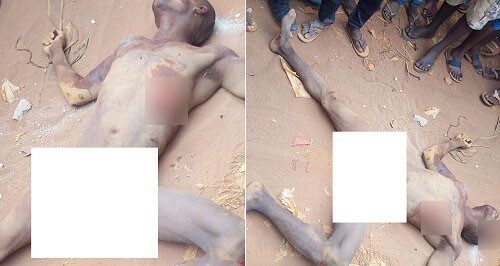 Two suspects have been burnt alive at a spot believed to be used by ritualists in Ile-Zik, close to Ikeja, capital of Lagos state, The Cable

Three suspects were arrested after security operatives raided the place on Thursday, August 10, 2017

Shoes belonging to male and female and other belongings of likely victims were found in the place, which also had parts of human beings concealed in sachets.

The sachets had price tags.

The police prevented residents from lynching the three inhabitants of the camp pretending to be mad persons on Thursday but by Friday morning, people stormed the place and set ablaze two men who attempted to escape.
The people also burnt one of the tunnels in the place and moved to a church nearby, where they destroyed the chairs inside and a vehicle owned by the pastor.

A resident, who refused to disclose his identity, said those using the place for criminal acts have a house inside the tunnel.
TheCable observed that policemen and soldiers were finding it difficult to control the angry mob. When all attempts to restore normalcy failed, the security operatives opened fire.

A policeman who spoke to TheCable on Friday said the people burnt were innocent.

“When the hoodlums came, they were many, they started stoning us… the two men running were stoned and burnt,” he said.

“We couldn’t fire direct at them because of what human rights people will say. They just killed two people I believe are innocent.”

How Nigeria Can Get Out of Recession – Ex-Gov Obi