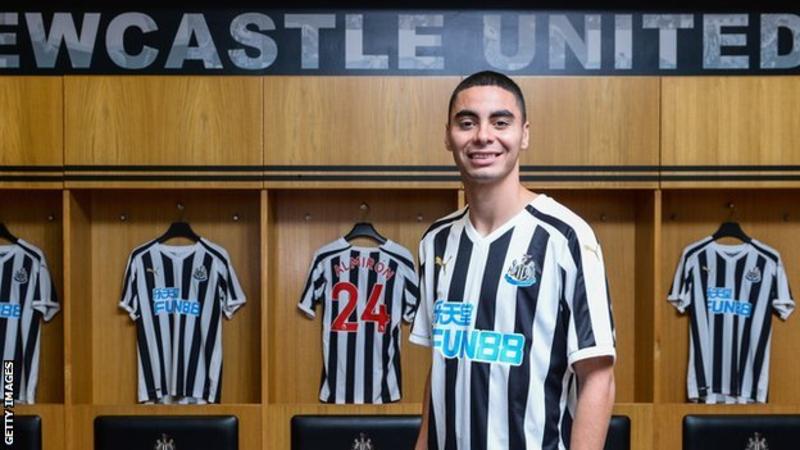 Newcastle have broken their transfer record to sign Paraguay playmaker Miguel Almiron from MLS side Atlanta United for about £20m.

It beats the £16m they paid Real Madrid for Michael Owen in 2005, and also breaks the MLS transfer record.

The 24-year-old has featured in the MLS team of the year for the past two seasons and scored 13 goals as Atlanta won their first MLS Cup last term.

“I’m very happy and eager to start and to meet my new team-mates,” he said.

“The league is very competitive, this is a historic club, and Rafa Benitez himself were the main reasons why I am here now.

“I think it is a great responsibility, something beautiful for me, and I will try to offer the best I can to repay the trust the club put in me.”

Capped 13 times by his country, Almiron is highly regarded in his homeland for his football intelligence, pace and left foot.

He started his career at Cerro Porteno in Paraguay before moving to Argentina’s Lanus.

And he was one of only six players to record double figures for both goals and assists (11) in Major League Soccer in 2018.

Unlike the signing of Owen, Almiron was not greeted by 15,000 supporters at St James’ Park, but the fee does represent a shift from the club’s relatively modest outlay in recent times.

Martin Dubravka, Ki Sung-yueng, Fabian Schar, Yoshinori Mutu and Federico Fernandez all joined in the summer for a total of about £22m.

Newcastle have also signed defender Antonio Barreca on loan from Monaco until the end of the season with the option of a permanent deal.

“I know that Newcastle is a big and historic club,” he said. “I know that the people here really love football and that the fans are really behind the team.”

Meanwhile, winger Rolando Aarons and midfielder Achraf Lazaar have joined Sheffield Wednesday on loan until the end of the season.