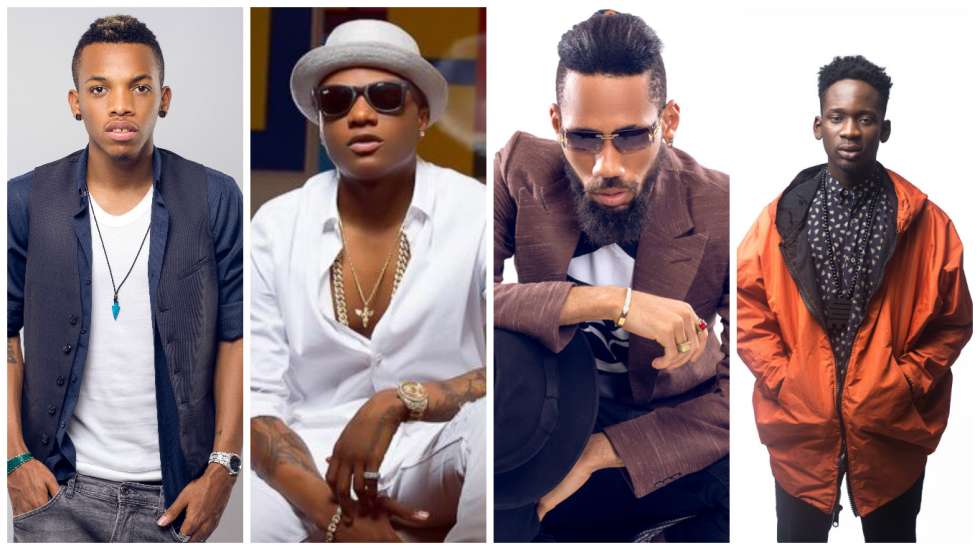 With popular music stars, Davido and Olamide, coming out in the last few weeks to state their support for political office holders, it has brought back into limelight how far some musicians go to canvass support for politicians in Nigeria. Although in the case of Davido, he went all out for his uncle, Senator Ademola Adeleke who was the governorship candidate of the Peoples Democratic Party in the recently concluded election in Osun State, Olamide restated a fact we have always known, that he is a big fan of Lagos State Governor, Akinwunmi Ambode.

In an announcement via his Instagram account days before Ambode’s eventual defeat in the governorship primary of the All Progressives Congress (APC) in Lagos, the “Motigbana” singer posted a poster seeking support for Ambode’s re-election as Lagos State governor. According to Olamide, the governor, who came under series of attacks from the party’s leadership since his declaration that he would seek reelection, deserves another four years in office. “Let’s do it again, support Governor Akinwunmi Ambode for continuity in 2019. Four more my Daddy,” he wrote. For the young man whose real name is Olamide Adedeji, it’s not so surprising that he is in support of Ambode’s 2nd term bid. The singer, who has associated himself with the APC since the 2015 general elections released two theme songs for the Buhari/Osinbajo Campaign Organisation. The singles, titled “Ese” (Thank You) and “The Change we want” were released before the elections. Also in 2015, a campaign song was released for Ambode featuring A-list stars including Olamide, MI, Ice Prince, Yemi Alade, Banky W and Dammy Krane titled, “Gbabe”. Olamide, who burst onto the scene in 2011 following the release of his debut studio album, Rapsodi, also described the governor as a father figure to him ever since the death of his biological father in Phyno’s well received ghetto gospel, “Fada Fada”,

A Nigerian singer and label executive, whose debut album, Omo Baba Olowo, has also featured on the political scene well enough in recent times. The Osun State gubernatorial election held last month had Davido’s uncle, Senator Adeleke on the ballot as the flagbearer of the Peoples Democratic Party (PDP). Throughout the campaign process until the day of election, Davido was the star attraction. The pop star was a huge mobiliser for the youth especially on social media as he canvassed lots of supporters to the side of his uncle, present at every campaign rally of the PDP and keeping people entertained with his music to the delight of supporters and other spectators.

Born Wasiu Ayinde Anifowoshe and popularly known as KWAM 1, K1 De Ultimate or Wasiu Ayinde Marshal; he is a Nigerian Fuji musician who has remained on the turf through last four decades. Credited with introducing the sounds of keyboards, saxophones and guitars into Fuji music, K1 has been a key player in the Nigerian political terrain for well over a decade. Having released several albums to campaign for and to praise politicians, ranging from Asiwaju Bola Tinubu to Babatunde Raji Fashola, Musiliu Obanikoro and President Muhammadu Buhari. In 2014, he dedicated an album to the second term campaign of Governor Rauf Aregbesola of Osun State, highlighting the infrastructural development the state has experienced within the first term of the governor. In 2017, he was on stage performing as Senator Musiliu Obanikoro defected to the APC from PDP apart from performing during President Buhari’s inauguration in 2015. Also in 2015, he led a host of Nollywood stars to produce a special campaign song for APC gubernatorial candidate in Lagos State, Ambode. The song was led by K1 and it featured a host of Nollywood stars including Muyiwa Ademola, Fathia Balogun, Sanyeri and Femi Adebayo.

The Ilorin-born Islamic musician whose real name is Ibrahim Labaeka is popular for songs like “Ilu Ilorin” which was released in 2008 as well as others like “Taalota?” “Aamin”, “Yaa Rabbi” and “Suuru.” The singer released a track for Senate President, Bukola Saraki, in 2012 in which he described Saraki as the cloth that shields his people from cold. However, there seems to have been a kind of fallout between the singer and the former governor. In fact, Labaeka himself has since ventured into partisan politics and is rumoured to be in the contest for a seat in the Kwara State House of Assembly.

Oritsefemi Majemite Ekele, popularly known as Oritsefemi, is a Nigerian singer-songwriter and performer best known for his remake of Fela Kuti’s “Double Wahala”. In 2014, he released the remix for his version of the song featuring D’banj but his “Great Politician” released in March 2015 is about canvassing support for the re-election of President Goodluck Ebele Jonathan in the 2015 presidential election. The video of the song is about praising GEJ for works done since he was elected president in 2011. Along with D’Banj, Oritsefemi also entertained President Jonathan at the National Stadium in Surulere on March 24, 2015.

Not exactly known to be involved with politicians as such, Phyno, a popular Nigerian rapper and music producer, released his debut studio album, No Guts No Glory, in 2014 having started his musical career as a producer in 2003. Known for delivering his rap verses in Igbo language, his 2016 hit song, “Fada Fada” featuring his favourite collaborator, Olamide paid tribute to a number of leading political figures in the South East including Governor Okezie Ikpeazu of Abia State, Governor Ifeanyi Ugwuanyi of Enugu State, Ifeanyi Ubah among others.

Better known by his stage name, D’banj, Oladapo Daniel Oyebanjo is a Nigerian musician, songwriter and entrepreneur who has won several music awards including Best African Act at the MTV Europe Music Awards 2007, Artist of the Year at the MTV Africa Music Awards 2009, Best International Act: Africa at the 2011 BET Awards and Best-selling African Artist at the 2014 World Music Awards among others. D’Banj’s major involvement in the lane of romancing politicians has to do with the remix of his massive hit song, “Scapegoat” in 2011 in praising then President Goodluck Jonathan. Thus D’Banj, whose collaboration with his former partner, Don Jazzy, led to Mo Hits, arguably the biggest musical powerhouse Nigeria has seen, described Jonathan as his close friend in the song while clamouring for his re-election in the election.

Onyeka Onwenu, a veteran Nigerian singer, songwriter actress and politician, is the youngest daughter of the Nigerian educationist and politician, D.K Onwenu. Dubbed the “Elegant Stallion” by the Nigerian media on account of her powerful voice and energetic performances in her younger days, she served as chairperson of the Imo State Council for Arts and Culture and as Executive Director/Chief Executive Officer of the National Centre for Women Development. As a leading presence on the campaign trail of Jonathan in the 2011 elections, Onwenu thrilled the gathering at the declaration of the former Nigerian president. And not many would have forgotten her sonorous with the popular refrain: “Run, Jonathan, run” even if it’s already seven years ago. She recorded and released the song in 2011 in support of the former Bayelsa State governor’s first term presidential campaign.

Eedris Abdulkareem is a Nigerian hip hop star credited with helping to birth what is today known as Nigerian hip hop scene. Abdulkareem performed with all-male hip-hop band, The Remedies from 1997 until they split in 2002 and enjoyed widespread success as a solo artiste and released the album P.A.S.S. (“Pains And Stress = Success”) in 2002. It’s most popular and controversial track, “Wackawickee MCs”, criticised Tony Tetuila, Plantashun Boiz and many others. In 2015, the “Mr Lecturer” singer dropped a campaign song for former President Jonathan titled “Shine Your Eyes.” In the song, he canvassed support for the re-election of the former president who he described as the best thing to have happened to Nigeria since the First Republic.