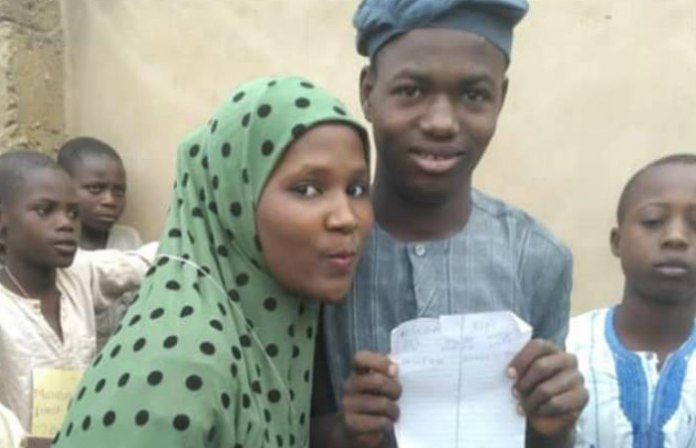 A woman in Bauchi State, North-east Nigeria, has arranged an election for locals to help her choose between two men she fell in love with, a witness has said.

What has been described as Nigeria’s “first free and fair love election” held Thursday in Giade town.

The young bride, Khadijat, said she was unable to choose whom to marry between two men she had fallen in love with.

Mubarak Umar, who described himself as an ‘accidental journalist’, shared the odd story on Twitter on Friday.

He said Khadijat fell in love with Ibrahim and Inusa and could not choose between both men.

Neither of the men was willing to step down without a contest. An election was therefore conducted by the elders of Giade town on Khadijat’s request.

The residents of the town turned out to cast their votes.

Inusa scored a higher number of votes and was declared the winner of Khadija’s heart.

In a new development, Umah said: “Ibrahim has finally finished all the necessary arrangements to challenge the outcome of the ‘love election’”.

Umah’s latest tweet read, “Security agencies were comprised, the election was not free, fair or credible as it is being circulated.

“I just spoke with Inusa, he said he is not afraid of Ibrahim taking him to court. According to him, the election conducted and supervised by Security Personnel including Civil Defence cannot be compromised.

“I will soon talk to Ibrahim to hear his own side of the story.”

Kamal Abubakar, spokesman of the Bauchi police command, said he was not aware of the incident.

“I don’t think the Police would be involved in such an election, but I would find out and get back to you,” he said Saturday afternoon but did not revert hours later.

Giade is the headquarters of Giade Local Government Area of Bauchi State.

The local government is the birthplace of the Chief Justice of Nigeria, Tanko Muhammad, who was born in the town of Doguwa. 

Why I Am Against BOBRISKY – Otunba...