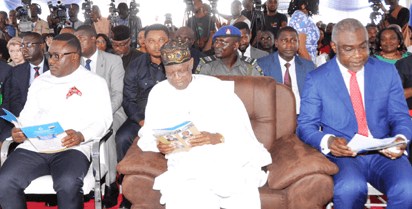 From left – Cross River State Governor, Senator Ben Ayade (left); Minister of Information and Culture, Alhaji Lai Mohammed (middle) and the Group Managing Director of Gospell Digital Technology Electronics Manufacturing and Assembly Company, Sir Godfrey Ohuabunwa, at the commissioning of the production plant of the company in Calabar on Thursday.

The Minister of Information and Culture, Alhaji Lai Mohammed said on Thursday in Calabar that Nigeria was gradually moving toward technological independence.

The minister stated this when he inaugurated the ultra-modern Digital Set Top Box manufacturing plant, owned by the Gospel Digital Technology and located at Calabar Export Free Zone.

The plant, regarded as one of the country’s largest electronic manufacturing and assembly, is capable of manufacturing TV decoders, prepaid electricity meter, smartphones. It is also capable of manufacturing TV main boards, tablets computers and all kinds of electronic devices. The minister commended the investors and the managers of the plant for exhibiting absolute confidence in the future and economy prosperity of the country and in the Digital Switch Over (DSO) programme. He challenged Gospel Digital Technology and other manufacturers of Set Top Boxes/Decoders to produce a multi-purpose television set that would help in transforming the TV experience of Nigerians. “The average home today, in order to have access to the various types of entertainment, will require a television, a Set Top Box, and a VCD/DVD player. “This era is about to end. I am challenging the industry to move to one device in the home – the television. “Give us a TV with a built-in decoder and the requisite middle-ware inside it. ”And please not for the rich, but for every Nigerian home. “With that, we would have succeeded in the reduction of the cost of access to television, information, and education,” he said. Mohammed hoped for an era in the country where viewers would be able to access Nollywood releases, with or without the internet and with a remote control that could convert the TV into a computer. The minister said that the transition from analogue to digital broadcasting in the country was to give Nigerians total television viewing experience, transform the life of the people and change TV viewing forever. Gov. Ben Ayade of Cross River, in his speech, expressed satisfaction with the manufacturer for locating the plant in Calabar He promised to buy 5000 Set Top Boxes and encouraged the investors to engage people from the state in its employment as a way of supporting the growth of the company. The Group Managing Director of the company, Godfrey Ohuabunwa, said the plant marked a new dawn in the electronic and IT manufacturing sector in Nigeria He said in addition to manufacturing of DTT and DTH boxes, the plant had three Surface Mount Technology Automatic Chip Placement lines and four pneumatic Assembly lines. According to him, the lines has the capacity of placing 2500, 00 components per hour. He said the plant was also capable of producing 20,000 Set Top Boxes per month, manufacture 100,000 printed circuit boards per month and would generate not less than 500 job opportunities. The Chairman, Senate Committee on Information, Sen. Suleiman Adokwe, Senators Shehu Sani, Samuel Anyanwu; Mao Ohuabunwa and the Director-General, National Broadcasting Commission (NBC), Malam Is’haq Modibo-Kawu attended the occasion.