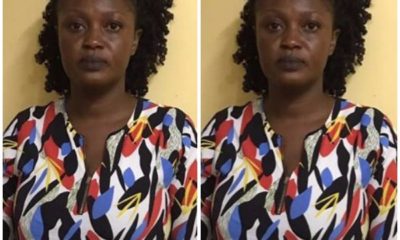 She is said to have defrauded over 10 victims under the pretext of selling vehicles to them.

Reports from Ghana say the police had earlier arrested a woman suspected to be Enchill Obeng at Osu on May 14, 2017, but upon investigations the law enforcers realized that it was a mistaken identity; and on the orders of the Director General in-charge of CID, COP Bright Oduro, she was granted bail.

Upon a tip-off, Enchill was later busted by the Osu police in another case and was later handed over to the CID for investigation.

According to the police, more law enforcement officials – the Tesano, Adabraka, Teshie and Airport police are also investigating her for fraud.

The Director in-Charge of Operations at the CID headquarters in Accra, ACP Peter Gyimah, told DAILY GUIDE that Enchill Obeng, who operated with the name Naana, displays various vehicles for sale with her contact numbers on them.

When interested persons contact her, she then arranges to either meet them or asks her accomplices to do so and in the process, takes from prospective buyers monies ranging from GH¢9,000 to GH¢50,000 and absconds, leaving the victims to their fate.

Enchill Obeng, according to ACP Gyimah, takes the buyers to other persons she claims are the real owners of the vehicles.

After the money has been paid, Enchill and her cohorts then present the victims with fake car keys and documents and asks them to go for the vehicles.

When the victims get to where the supposed vehicles are parked, they will not find them (vehicles).

When they return to the place where the money was paid, they do not meet anybody.

Police investigations have revealed that the suspect and her accomplices often use apartments with owners outside the country or hospitals for their nefarious activities.

Six of the victims of Enchill Obeng told the police that their monies were collected at the Korle-Bu Teaching, 37 Military and the Ridge Hospitals, DailyGuideAfrica.com reports.

Nigeria’s “Most wanted” female fraudster caught in Ghana after 9 months on the run was last modified: October 7th, 2017 by Reporter

Lady recounts how man masturbates in front of her at Cele area, Lagos