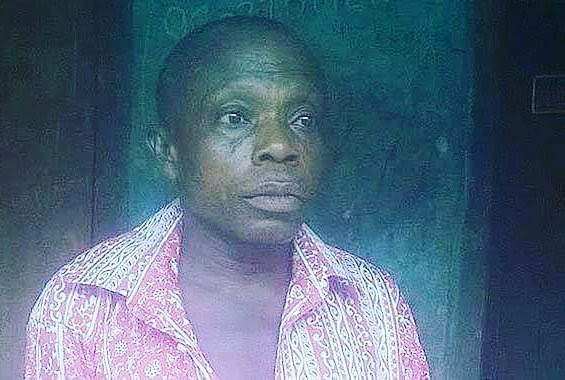 The police high command has arrested the most trusted herbalist of the late kidnap-for-ransom kingpin, Henry Chibueze, popularly known as Vampire, who had in the last few years operated with terror in the Southeastern and South-South states.
According to police sources at the Force Headquarters in Abuja, the 55-year-old ‘medicine man’, Iweajuo Gad, was arrested in his shrine at Asoeme Town in Aba, Abia State on Sunday by the Inspector General of Police’s Intelligence Response Team (IRT).
According to the source, “in continuation of the operations in mopping up Vampire’s gang members in the Southeast, IRT operatives arrested one Iweajuo Gad from Asoeme Town in Aba, Abia South Local Council. The suspect is the number one herbalist of Vampire and many other groups of armed robbers and kidnappers.
“One of Vampire’s gang members already arrested led detectives to the shrine where the herbalist was arrested. The suspect confessed to have given many bullet repelling charms and ‘disappearance charms’ to Vampire and his group.
“He further confessed to interrogators that he led three herbalists to perform special rituals to secure Vampire’s rescue from the High Court in Owerri. He told detectives that the names of seven prison service officers were brought to him by Vampire’s brother to perfect the rituals that would disorganise and destabilise the officers during the rescue. They were given N200,000 for the ritual and one week after the successful rescue, Vampire sent N500,000 to him.”
Vampire, a notorious kidnapper in South East and South South axis, was killed in a shootout with the police last week Thursday. According to the police spokesman, Jimoh Moshood, a Chief Superintendent of Police, Henry Chibueze, aka Vampire, was killed at Omu Awa forest, in Ikwerre, Rivers State.
Chibueze, who was paraded by the DSS before the state governor in 2015 admitted to have carried out several kidnappings in the state and beyond before his arrest. After Chibueze’s escape in January, Imo State governor, Rochas Okorocha, announced a N5 million bounty for information that would lead to his arrest.
source: Guardian