OBA OF LAGOS REBUFFS OONI OF IFE: APPRAISING THE AFTEREFFECTS By Omoshola Deji 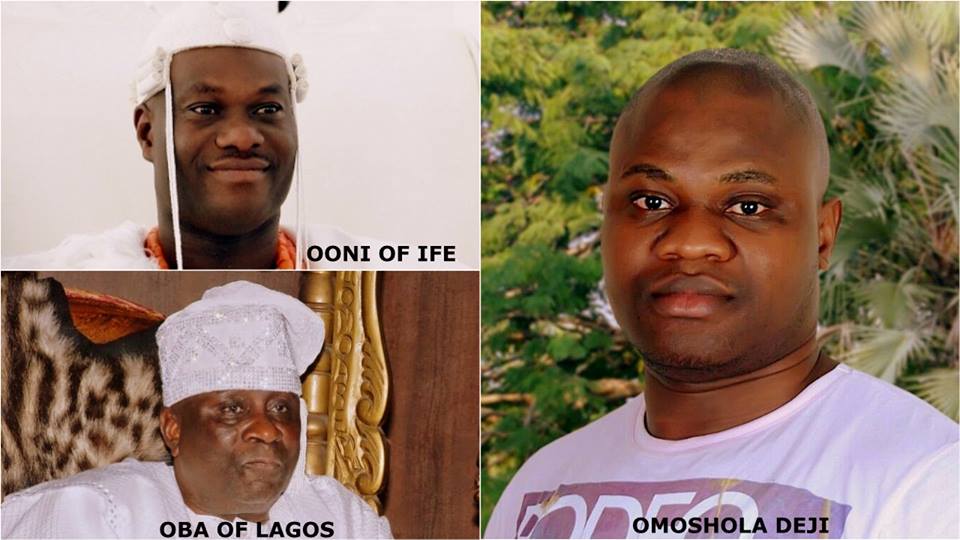 Civilization and modern forms of governance have drastically diminished the power and authority of monarchs. Fading, not faded, our hidden admiration for primordial values sustains the influence of monarchs on government and the governed. Monarchs currently have no constitutional role, but their grassroots prominence generates patronage from virtually all holders of public office, industrialists and dignitaries. This patronage vindicates the presence of monarchs in social and state functions.
The Oba of Lagos, Rilwan Akiolu and the Ooni of Ife, Adeyeye Ogunwusi’s presence at a function recently produced a much-needed distraction. Just when Nigerians were ardently debating President Buhari’s healthiness and his ability to rule, the video of a royal discord between two Yoruba monarchs diverted public attention like an orchestrated political gimmick. Summarily, the public was enraged that the Oba of Lagos dare rebuff the Ooni of Ife.
Although different scholarly and historical account of the Yoruba race exists, the Ooni of Ife is widely acknowledged as the supreme Yoruba monarch. The Oba of Lagos is not rated among the leading monarchs. As ranked by the Alake of Egba, the top five royals in Yoruba land are the Ooni of Ife, the Alaafin of Oyo, the Oba of Benin, the Alake of Egba and the Awujale of Ijebu respectively. To bring you up to speed, a narration of what transpired in the viral video is necessary.
In accordance with the Yoruba regal heritage, some royal guards’ were eulogizing the Ooni while others hastily cleaned his reserved seat. Admiringly, people loosen their neck strings to catch a glimpse of the Ooni’s majestic entry to the occasion. Humbly and commendably, Ooni Adeyeye exchanged pleasantries with a seated monarch and was he warmly welcomed. Upon approaching the Oba of Lagos, the Ooni, an earthly king of kings, was snubbed in the most absurd manner. He was publicly rebuffed like a mere slave or palace guard.
In shock, Nigerians, especially the Yoruba’s, couldn’t rationalize the courage behind Oba Akiolu’s action. Could it be because Oba Akiolu (74) is older than Ooni Adeyeye (42)? No, that’s not cogent! Similar to the police and army, the rank of a king’s ancestral dominion determines superiority, not age.
Frightened by the overwhelming public outrage and condemnation, Oba Akiolu issued a statement denying that he snubbed Ooni Adeyeye. One of the Lagos white cap chief, Lateef Ajose, proclaims that the snub is “the culturally acclaimed way of greeting by a Lagos monarch” and Oba Akiolu is “basically trying to revive the culture and tradition of ancient Lagos”.

* Omoshola Deji is a political and public affairs analyst. He wrote in via moshdeji@yahoo.com

OBA OF LAGOS REBUFFS OONI OF IFE: APPRAISING THE AFTEREFFECTS By Omoshola Deji was last modified: April 30th, 2017 by Reporter

How My Wife Complements Me – CLAM...