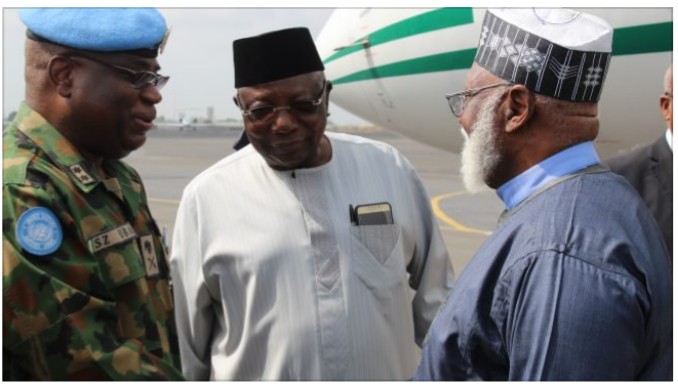 Ex-President Olusegun Obasanjo and Abdulsalami Abubakar, former military head of state, are currently in Monrovia, capital of Liberia for the swearing-in of George Weah as Liberia’s president.

Speaking to reporters shortly after his arrival on Monday, Obsanjo said he was a proud man to witness a peaceful democratic transfer of power in Liberia, considering the huge sacrifices made by Nigeria for peace and stability in the country.

“I am very happy over what is happening in Liberia today and I congratulate my brothers and sisters in this great country,” he said.

On his part, Abubakar hailed the ongoing peaceful transition of democratic government to another in Liberia.

Abubakar said the development was yet another testimony of the rapid growth and development of democracy in the African continent.

“It is a pleasure to see that in our region democracy is growing from strength to strength,” he told NAN.

“Liberia is a sister country to Nigeria, and during the Liberian crisis, the world knows the sacrifice Nigeria made in this country in terms of human and material resources.

“I commend the Nigerian government, the troops and Nigerians who supported Liberia during the crisis to arrive at this day.’’

Obasanjo and Abubakar played key roles in stabilisng democracy in Nigeria. It was Abubakar who handed over to Obasanjo in 1999.

Weah described his election as a unifying factor in the country. He will take over from Ellen-Johnson-Sirleaf, first female president in Africa.

The president-elect reiterated his assurance of greater freedoms, saying he would not interfere with the tenants of democracy, especially political dissent.

Weah is a retired professional footballer.