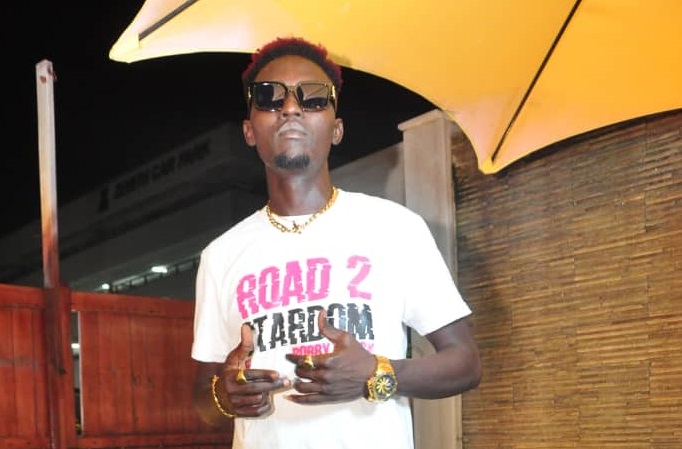 Saturday 7th, November 2020 was a dance hall of stars, celebrities, entertainers at the after party of Bobby Black listening party and press release as friends, families and coleaques turn up in numbers to grace the occasion.

Titilope Oshunlalu of City People was at the event to interview the up coming artist, Habeeb Abidemi Ajayi popularly known as Bobby Black.

Can we meet you?
My name is Habeeb Abidemi Ajayi popularly known as Bobby Black,I am from Ogun State.

How do you get into music?
I noticed a long time ago,while in secondary school between 2003/2004 ,I see myself drumming on the desk in class and in 2006,I listen to more of Akon and from there I discovered I can write song on my own and I tried writing a song and since then,it as been a boom and I have been doing good on my own.

What inspires you into music?
The pains I am going through,what is happening around me,my country and more.

Any advice for the up coming artist?
My advice for up coming and young artist is, believe in yourself,the way you see yourself,is how people will see you,your success lays on your shoulders.

Can you mention your past performance/events?
I have performed in several events all around Lagos and other states.. my past includes Mc hallelujah official unveiling of ovkings at Lekki and my last event was my Ep listening party on the 7th of November 2020.

If not music,what else will you do?
A footballer or Soldier was what I have in mind if not music.

If you could change anything about the entertainment industry,what would you change?

I will change the way Nigerian artists are not getting royalties from their songs .

What is the best advice you have ever received?
You are destined to make it,just keep your head up and keep soaring high.

What is next for you?
My new videos Believe,Groove Ft Areezy,Bolatito Ft Semat will be dropped on 15th of November,2020 on all digital platforms and TV stations and I still have more videos coming in like sweet mother and loose ft Vyper an America based artist also shot and directed by Joel Matt (Born to do it)

Where can your fans get your song?
My song is everywhere.

How is Nollywood actor Bolanle Ninalowo to you?
I met Mr Bolanle Ninalowo in 2011 and he really tried alot for me,he give me good advice on how to embark on my musical career and he also gave me the privilege to record free in his studio DIESEL MUSIC back then in 2011,he is presently on set as we speak,that was why he is not here.He has been so supportive and I give him Kudos and appreciate him always.

How did you meet Mr Taiwo Oduala?
Mr Taiwo Oduala is just like my mini god, he is my boss, he is the CEO of Oduataj productions and Entertainment,I am really missing him here, he is far away in America directing films being an international filmmaker and director, he believe so much in me,he has been so supportive,I met him in 2014 and he promised to sign me under his label Oduataj Entertainment and since then,he has been my everything,I released my first single titled Ire under Oduataj Entertainment in 2018,the video was shot by Joel Matt (Born to do it) and released under Oduataj Entertainment in 2019.And I have some couple of songs on iTunes Spotify Audiomack and all other digital platforms. I am so happy I met a man like him.

Who is your director/manager?
Joel Matt is my video director and manger,he directs all my video,he has been the brain box behind Oduataj Entertainment,he is everything to me and I give Kudos to him.
Dotun Adekunle,the CEO of Ferari Entertainment is also my manager,Ferari Entertainment give promotion and hospitality to artist and clubs,he is here tonight to rejoice with me,and also my boss twin brother Mr Kenny Oduala is also here to give me the full support and advice to me.

Message to your fans?
My fans I love you all,I appreciate your encouragement,I get alot of messages online ,each time my song is played on Africa magic,Rave TV,STV,TVC,HipTV.
I love you all.

City people have a one on one interview with Bobby Black’s manager, director, Oduataj Entertainment boss and Mr Taiwo Twin brother Kenny who were also at the listening party.

My name is JOEL MATTHEW known as Joel Matt (Born To Do It),I am a cinematographer and video editor of Bobby Black’s musical video and also a staff under Oduataj Entertainment.
I have come to support Bobby Black tonight because,we work as a team as we believe the best of us is yet to come.

Dotun Adekunle CEO Ferrari Entertainment, we are into promoting artists and clubs,we believe so much in Bobby,we knew he is going places,Bobby is an asset, his way of life is contagious,you will want to love him,he is like a brother to me and that is why I am here tonight.

Kenny Oduala:
I am Kenny Oduala,twin brother to Oduataj Entertainment,I am the CEO of Kenny motors and properties,we are here to support Bobby and to encourage him in his musical career,Bobby has been a great guy,we love him and we wish him all the best in life.

Bobby black is my artiste under my music Label ODUATAJ ENTERTAINMENT.

Bobby black is a young gentleman with bunch of talents, he writes and sing Songs. His humble and very efficient.
My plans for him is to make him successful and famous with his music, making him a big time celebrity, so afterwards he can stand on his own having his own music label.