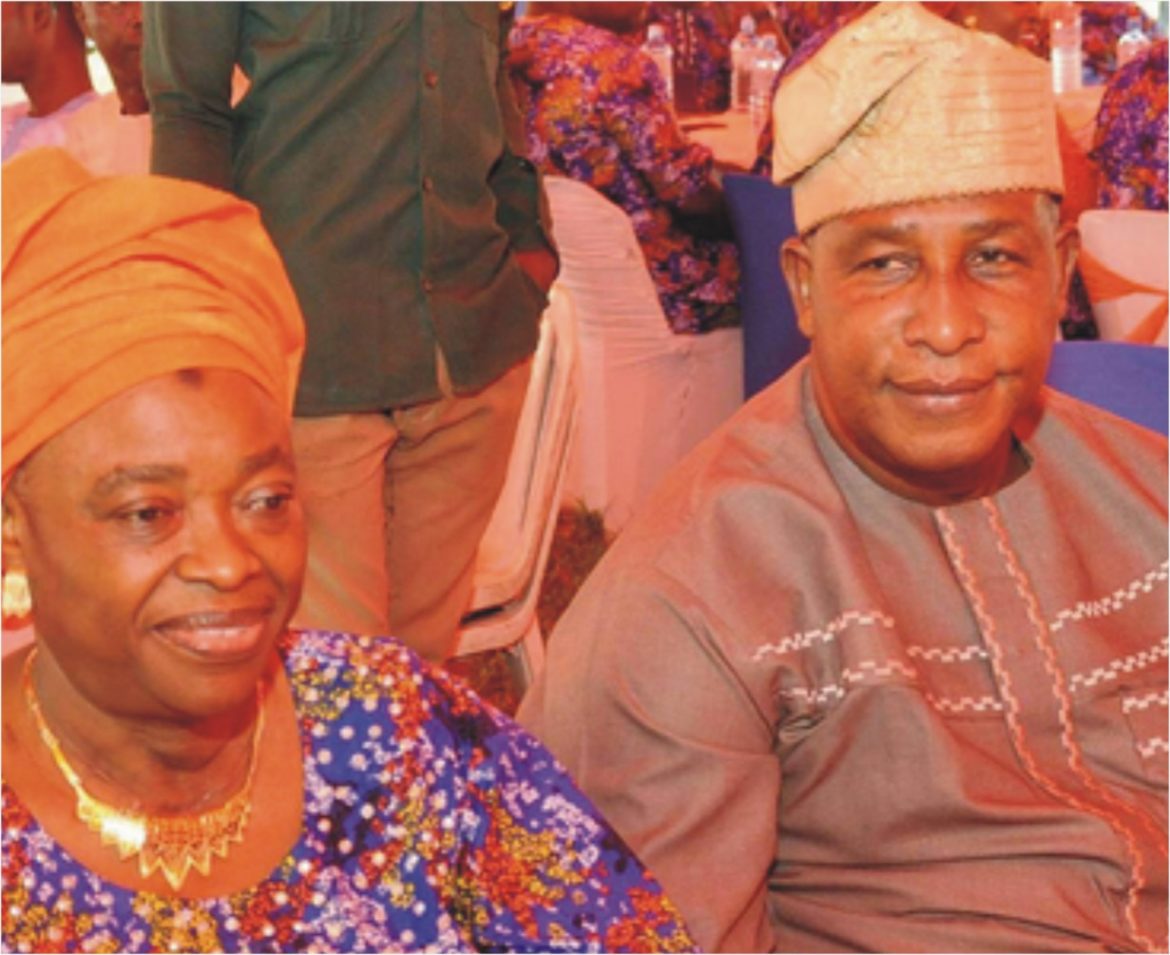 The Adebayo family is one of the most popular Nollywood families dominating the Yoruba movie industry. Of course, the patriarch of the Adebayo family, Alhaji Adebayo Salami a.k.a. Oga Bello needs no introduction. He is an award-winning movie legend and he is always in the news for good reasons.

Despite being in the news, his private life and love stories are not always out there. Both Oga Bello and his wife Alhaja Risikat Ejide, the brain behind Ejide Films and Marketing don’t like being in the news.

Though Ejide Films is also very popular in that sector but she loves to stay behind the scene. Not many know the amazing love story between her and her husband of over 4 decades.

City People Magazine has carefully transcribed an exclusive interview conducted by Tunde Kelani TV where Oga Bello and his wife, Alhaja Risikat Ejide spoke on her marriage, her growing up, how she coped with her husband’s many children.

How did you meet your husband, Oga Bello?

Well, I met my husband in our primary school, Ansarudeen Primary School, Oke Popo, Lagos Island. Then we just knew each other as primary school students. My husband, Adebayo Salami used to be so full of himself. We used to call him “Oba” (King). He is the one who used to lead us in prayer every Friday at the school. On each Friday when all of us would wear school uniform, he wears white.

He was a Prefect so whenever I am found wanting, he had special ways of dealing with me. Whenever they say we should do our ablution and I didn’t do it, he will beat me. Whenever he beats me, I always go to his parents to report him.

So one day, I went there as usual and his father sent me away to stop coming to report him. As kids, I could go to his parents 3 times a week to report him. That was how I stopped reporting him. So after that scenario, he will beat me to stupor until we later became friends.

What attracted you to your husband despite all the ill-treatment you got then?

Well, despite all the things he was doing to me, I didn’t blink an eyelid. This is because I like him. I like him so much that everyone in his area knew that we shared an inseparable bond. Do you know that whenever I go there, I don’t always meet anyone? So I also won’t spend much time because they will be looking for me at home. I may now go and see him 10 times a day until I am tired.

How did you continue after primary school?

Well, after our primary school, he will write me letters. I was in a boarding house but he was a day student at different schools yet this didn’t stop our love for each other. We met different people, while in secondary school. It was when his letters kept coming that it dawned on me that he wanted to date me. What we had for each other during primary was pure affection. That was how we started. I went to Muslim Girls High School, Ishagamu and whenever we were on vacation, I won’t go home direct, I will first go and tell him that I am back.

Though I won’t stay with him, I will just show my face and leave.

Was he an actor when you got married?

When I got married to him, he was already acting. I wasn’t into acting but because I love him and what he stands for, I had to support him. People were always in our house, I was always accomodating because of my husband. I also endured it to make him happy.

How did you manage your husband’s stardom?

Just like my husband said, when he became so popular, many women were frolicking around him. He couldn’t manage it. But my mum is a very tough person. I remember she told me that I can’t come back after marriage and marriage is all about endurance. So going home to tell her wasn’t a choice.

Then my immediate elder sister that was very close to me doesn’t have an enduring spirit like me. So I told myself that I will keep it to myself. I felt telling people or seeking advice may make people instigate me against him. I love my husband and I don’t want us to fight.

It took me many years for me to tell my parents that my husband has other wives.

They couldn’t do anything since I wasn’t complaining to them. I was also working and making good money. I also believe its destiny. So whenever I hear that he impregnated somebody, I don’t ask him, but sometimes he will tell people to beg me. He also formed the habit of running away whenever that happens.

I think he also saw that it was too much. This is why I didn’t have friends. I don’t want friends to tell me things that will make me fight my husband. So the last one he did and ran away; I had to tell his friends to help me look for him that I am not angry. I love my husband so much.

Did you ever get angry?

Angry, no, but as a human being sometimes it is painful. Sometimes I think about it but love won’t allow me get angry. I just tell myself, I have my own kids. I have boys and girls, what else? So I told myself, I will be patient with him and look after my children. While doing all that, my husband brought his other children for me to train and that was how I trained them.

What about his other wives?

Oh! I have to accommodate them. I love my husband and anything he stands for. How many people do I want to fight? I am not saying it is not painful but what do I do? Let me shock you. There was a day I cried from morning till night but after that, I told myself, “why are you crying, you better stand up and make food for these poor children. Then we were staying at Atitebi in Ebute-Metta. Look at those kids now, you won’t even identify their individual mothers.

They love me so much. One should accept destiny and trust in God.

I was trained by my maternal grandmother. She is a Muslim from Ilorin. She was the one who told me that the only thing she can give me is “Tesuba”. She also said I must be prayerful. I think it is this upbringing that shaped my life.

This is what I have told all my children. I tell them to be prayerful. I even tell them that we must be prayerful even to those who did bad to us. All these have helped me a lot. I love prayers. Every morning after greeting my husband, I pray for him. This is because it is written that any prayer that lovers pray for each other always get answered.

If you come back to this world again, would you marry Oga Bello?

READ ALSO: HOW TO BE A GOOD ACTOR – POPULAR MOVIE STAR, ITELE

How To Be A Good Actor – Popular Movie Star, ITELE

Why I Had To Return Back To LAGOS PDP LAGOS Guber Candidate, BABATUNDE GBADAMOSI