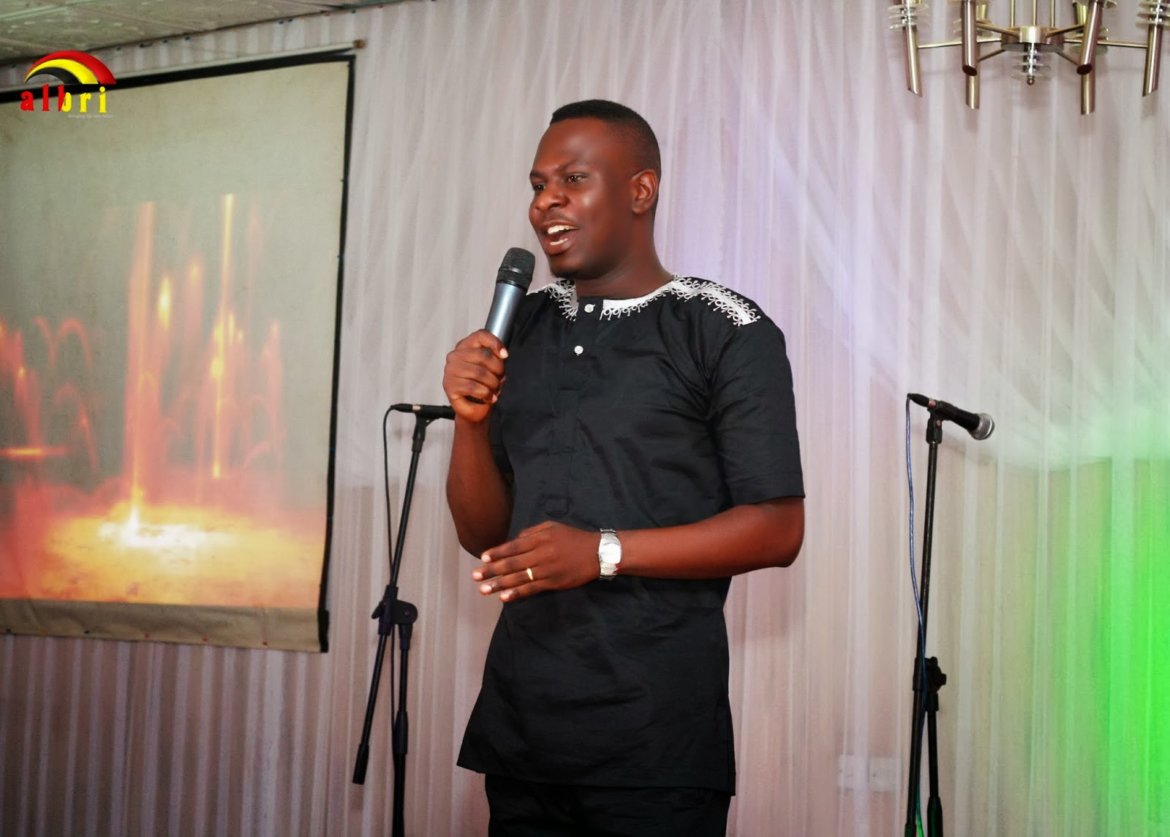 Dr. Smile is one of the popular comedians in the Southwest,  he is based in Abeokuta.

His brand is fast becoming a household name in Nigerian comedy scene.

Dr. Smile’s unique brand of clean energetic comedy is infectious and with his quick wit and unpredictability, he is undisputably a natural entertainer, which gave him the title “COMEDY EMPEROR” by his fans.

Dr Smile is busy anchoring various corporate events like; product launches, costumier fora, brand promotions, summits. He is also in high demand as master of ceremony for various private events. Dr. Smile has featured on series of programmes on Radio, Television Stations and in Prints. In this interview with BUNMI MUSTAPHA, he opens up on why he started his Tv show, his journey into acting, and about the 4th edition of his yearly comedy show, Dr. Smile Unusual. Excerpts.

I was with  Mr. Latin at a particular location in Abeokuta and he said: ‘Dr. Smile come and play with me on set’. That day on set, I saw Odunlade Adekola, he was the one directing the movie. The title of the movie was: Owu Adebayo. When I saw Odunlade he said Dr. Smile could you please come and do a scene, and I did the scene perfectly and it turned out to be two scenes, and then three scenes and after that anytime Odunlade is shooting a project, he loves to call me that he wants me on set to do two or three scenes and now I’m getting lead roles. So, my journey into the industry has been basically planned by God not me. It’s a journey. So, now Dr. Smile has started a TV programme, it’s a journey, it’s a phase. I didn’t plan it. God just said this is the next thing to do. So, like my mentor did say, if you believe so much in God, God will lead you. I am in the movie industry according to God’s script for my life.

So, now let’s talk about the TV series you mentioned earlier, can you tell us about it?

Yes, I noticed one thing about Nigerians, we don’t celebrate the comedy legends. All we do for them is probably when  we remember them, we just say “oh so that guy is still there. Is he still doing this? So, something came to my mind while I was sleeping and the spirit just told me, why  don’t you just do something for the comedy legends? The idea came to me that Dr.

Smile  is it your show celebrating a comedian, a legend in the industry? Somebody like Luku Luku, majority of the people have forgotten Luku Luku even majority don’t know Luku Luku so to speak, Baba Suwe, Aluwe, Dejo those are the acting aspect, Sam Loco and  Osufia in London. So, I once thought of it that since we have some stand up comedians, who have contributed their quotas to the development of comedy in Nigeria they should be honoured. Comedians like Julius Agwu, Okey Bakassi, Gandoki, Basket Mouth, Ali baba. So, I now thought let me just start a programme that will be celebrating a comedy legend every week, so I came up with the segment called comedy legend of the week. After that, we go on the street to ask people if they still remember a comedy legend and if they can  act like that comedy legend. Like the one we did for Baba Sala, somebody said oh! Baba Sala, he used to say this. It’s like bringing back the memory of the legends. We just want people to know who the comedy legends are. On the programme, we showed some of Baba Sala clips and some aspects of his personal life as Baba Sala. That’s the joy of the show.

Does your closeness to Odunlade Adekola has any influence on your acting career?

Yes, I will call Odunlade Adekola my mentor, role model, director. Anytime he is having a script for me, he would say Dr Smile I want you to do this, he would act it for me and say “this is how you would do it” and I would interpret. Odunlade has been a brand, the force behind Dr Smile being an actor. Now, I get roles from other directors and producers, but Odunlade made it happen. He eggs me on. Now, courtesy of Odunlade, I have done nothing fewer than 15 to 18 movies produced by Odunlade Adekola alone. And once you are on Odunlade’s script, people will know you. Once you act on Odunlade’s project, everybody must know you because people love Odunlade’s movies. That has given me an edge. After God, Odunlade is next.

Apart from the movie he directed when you went on Mr. Latin set, what was the first movie in which you played a role in Odunlade’s movies?

The first one was Owu Adebayo, the second one came out two weeks ago Adeolu Ariwo. I did two scenes, but the movie I will call my major movie is Tamilore Eru Oke. I played Odunlade’s friend and after the movie people started calling me. Even my mother watched the movie and said she saw me in a movie, she was so happy. But the one I love most from Odunlade’s list is called Fiogbonsola where I played officer Segun, Odunlade Adekola’s brother, but my best is yet to come because I did a movie of recent, a very crazy movie from the stable of Abbey Jomo. It was my first lead role, I did a lead role with Okele. The title of the movie is: Kiloshele Gangan. It’s a very crazy movie just watch out for it. I did one too, a cinema movie from Sholoke Wuye ”Wetin Woman Want” and I played a Uber driver. Go to the cinema and watch it.

Could you compare acting with Comedy?

You can’t compare the two because acting does not earn big money, it will only give you fame, but comedy is instant money. The least a comedian charges is 100k for your event, for my category, we charge four hundred thousand, five hundred thousand and for movie roles I can’t be paid more than forty thousand, fifty thousand, as an upcoming actor, but when you become a super star, you can be paid more, but for an upcoming comedian, even if you are not funny, you can still charge five thousand, ten thousand.  If I’m coming to this earth again I will like to take comedy as my first choice because the money there is good.

The 4th edition of Dr Smile unusual is coming up soon and, ofcourse, we know you do something unusual every year just to wow people and let them know that it’s always different every year, what should we expect on May 1st?

Expect the very best of entertainment. This year, Dr. Smile is coming to do different things.

I will be coming out as a comedian, a musician, an actor ,a presenter, I will be doing a life TV programme also, I will be doing acting, I’m acting a play live on set, in which the interviewer is part of the cast ….We are doing something crazy, Dr. Smile is coming out as a singer. I started my life as a singer. I started as a musician in 1991. I started with Yinka Ayefele, Femi Lancaster.  Iplay talking drum very well, so on that day, Dr. Smile will play the talking drum, I will act, I will do comedy, I will sing and do my TV presentation and expect the best of the best of the entertainers coming. The lineup is crazy, it’s unique. We have a lot of crazy guys coming.

I have the mentor section where we will bring the king of comedy, we have the street section. On the street section, we have small doctor, Jaywon, Woli Agba, Woli Arole, we have Esybee live, Artquake, still ringing and on the king of comedy section, we have TA, Teju baby face, Seyi law, Gbenga Adeyinka, Lepacious Bose and Big Bolaji, Big Bolaji will be coming to praise God for us. We have a praise section before the main event, so expect the very best. And I promise you we are giving out nothing fewer than 500 tickets to the best of the best of the civil servants we have in Ogun State. We are picking from the group aspect that people don’t really appreciate. We are picking 50 from the Police, picking from Civil Defence, picking from FRSC, we will pick randomly. And then we are giving out 50 tickets to primary school teachers.

These are set of people that a lot of people have neglected. We do not celebrate them at all. We want to bring them out let them have fun, so this is how we will do it, we will put it on Instagram for people to nominate their best teacher, the teacher that have the greatest influence on you. Even if the teacher has resigned, we will go to their houses and drop the tickets and we will bring them to the venue. That is what we will be doing this year.

How do you cope with female fans and staying out of your home mostly for jobs outside the state?

The issue I have is this, people don’t know this. I am saying this because this is City People and it’s my family magazine.  Anytime I am outside the state, I am always with my family, anytime I am outside town on Friday through to Sunday I am always with my wife and kids. I lodge them go and do my work  and then we will come back on Monday morning, so at times my kids get to school late on Monday morning because we might be coming from another state, but on Monday, we will be in town together. So, we are always together every weekend.

What advice do you have for comedians striving to be known and be a force to reckon with in the comedy industry?

I would say please try as much as possible to have one or two jokes that are yours. Enough of this piracy. You will see upcoming comedians cracking one of Ali Baba’s jokes, while doing night of a thousand night and you don’t give credit to the owners of the joke. It’s so painful. So, if you are an upcoming act, try as much as possible to work on one joke that is yours and you can then remix other comedians, but one thing is originality is the key and spontaneity can come later. You cannot be spontaneous from the very first day, but I can tell you that originality would bring out the spontaneity in you and before you know it, you are already making it, and, ofcourse, be humble.

Speaking of fresh jokes, how do you refresh your jokes and come up with new ones all the time?

I read a lot and watch movies. In life, I see the funny side of things. Don’t look for jokes in things, look for things and make jokes out of them. Like the crazy joke at my last event about going to a barber’s shop and the barber doing some crazy things and everybody loved it. Now, I will have to work more on the joke to make it a brand like kini rice joke and some other jokes I did.