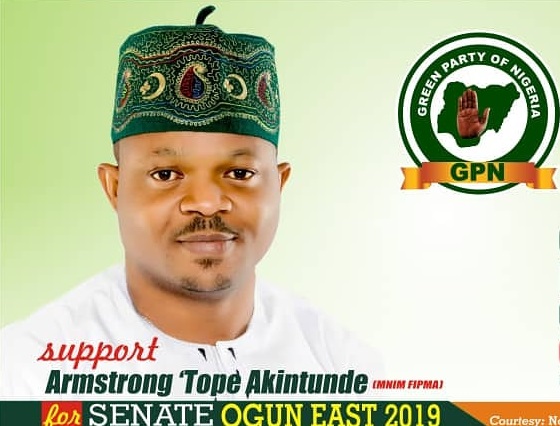 The resolute and articulate crusader has promised to fight the scourge of corruption in Nigeria better than current lawmakers, have done.

In his policy document which he released to newsmen on Friday, January 4, 2019, Akintunde said corruption poses critical challenges to Nigeria’s economic and social development.

“Corruption not only diverts resources from legitimate causes beneﬁcial to the society at but denies millions of people their fundamental freedoms and human rights. The challenges posed by systemic corruption contribute to the perpetuation of poverty and the hindering of economic opportunities,” he said.

He also noted that despite the establishment of relevant anti-graft agencies by previous governments, the present one, led by Buhari, has been accused of serious nepotism, partisanship and lack of political will and the impartiality to deal decisively with corruption.

He alleged that this administration’s fight against corruption lacks transparency and allows for rules to be subverted without appropriate sanctions as there’s no effective mechanism to enforce the laws of the nation.

He also blamed the ineffectiveness of Buhari’s anti-corruption war on weak anti-graft institutions which he said are inefﬁcient, unresponsive, and susceptible to corruption.

Akintunde concluded that the absence of a coordinated national anti-corruption strategy that fosters transparency and accountability in a non-partisan manner means that Buhari’s fight against corruption cannot be trusted by Nigerians.