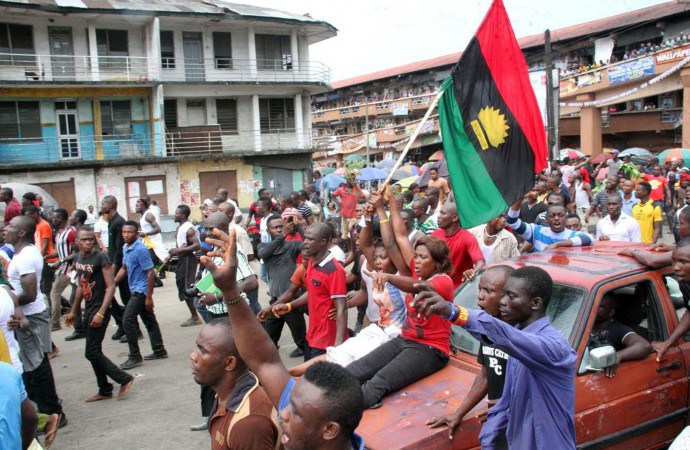 The Movement for the Actualisation of the Sovereign State of Biafra on Wednesday said the late Dim Chukwuemeka Odumegwu Ojukwu would have waged another war against the country should he be alive over the continued detention of the leader of the Indigenous People of Biafra, Nnamdi Kanu.

He blamed the Nnia Nwodo-led Ohanaeze Ndigbo for not finding time to visit Kanu in prison.

Madu wondered what had kept Nwodo and other Igbo leaders from visiting Kanu even when it had become visible that they had been gallivanting about, paying solidarity visits to those who did not deserve such courtesies.

His statement read in part , “If truly these men in Ohaneze Ndigbo leadership love our people knowing fully well that 90 percent of Ndigbo prefers Biafra to staying in Nigeria, what has kept Chief Nnia Nwodo, his executive and Ime Obi from visiting or showing solidarity to Nnamdi Kanu, the most loved Igbo man today?

“What has been keeping the leadership of Ndi Eze in Igbo land from visiting Nnamdi Kanu in prison or his father, a fellow member of the southeast traditional council?

“ Why is it that Igbo National Assembly caucus has never shown any sign of affection to the travails of Nnamdi Kanu and others?”

The group which said it was missing the father figure of the late Ojukwu, asked the Nwodo leadership of Ohanaeze to emulate the likes of late Senators Uche Chukwumerije, Ikechukwu Obiora, Enyinnaya Abaribe, Joy Emodi, Annie Okonkwo who would “storm the court in solidarity during my detention, Uwazuruike and others.

He added that “During my three years, six months and two weeks detention in Suleja, Keffi and Kuje prisons from 2006 to 2009, Senator Uche Chukwumerije and others severally visited me and others in prison.

It added,“What is still holding the Southeast CAN and other Religious leaders from showing solidarity to our brother, Nnamdi Kanu and others in prisons.

Ojukwu would have gone to war over Kanu’s detention – MASSOB was last modified: March 8th, 2017 by Daniji Emmanuel

Bobrisky attacks Kemen over his eviction from #BBNaija