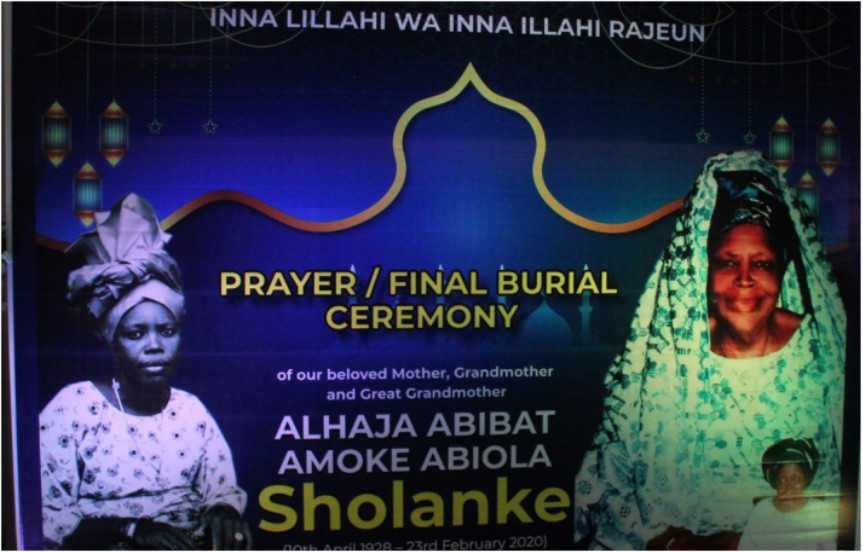 As a way of giving their departed mother a befitting burial ceremony, the children organized a prayer for her soul after which a grand reception was held. Both programmes were held at the classy hall of The Haven Event Centre located at the Government Residential Area in Ikeja, Lagos.

The prayer session began at 10 am and was anchored by a number of Islamic clerics. Members of the family were all on the ground to take part in the prayer for their Matriarch.

The reception party began as soon as the prayer was concluded. It was a glamorous party which saw lots of guests, amongst who are friends, associates, neighbours and well-wishers of the children and the family turn in massively. The guests were entertained by the Melody Band led by the deleterious Seyi Crown.

It was indeed an event with lots of fun-filled moments.  The peak of it was when each child of the deceased was ushered to the dance floor to merry while their guests joined them on stage.  The children all had a wonderful outing as they gave a good show on stage dancing to the melodious music by the Melody Band.

Speaking to City People reporter, Jamiu Abubakar at the party, Olaniyi Sholanke spoke on why he and his siblings would miss their mother.

“She’s such a lovely mother. She taught all of us how to love and take life simple.  Right from day 1, I learnt from her the principle that: with love, nobody can offend you. She also taught us that with God, prayer and hard work, one can achieve many things. We miss her and we will continue to miss her. She is so accommodating to everybody around her that you would think she gave birth to all the children that were in the community. The love we have for our mother would make us celebrate her over and over again.”