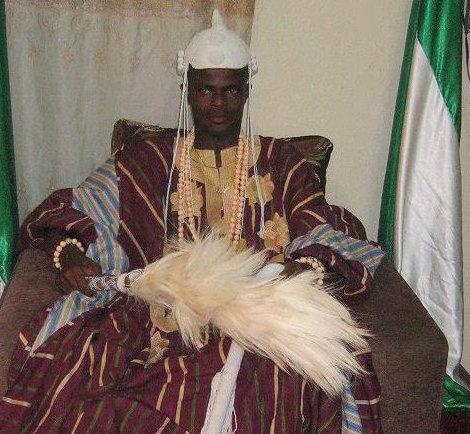 Its no longer news that the Olu of Ilaro, and the paramount ruler of Yewaland, Oba Kehinde Adegbenle, turned 50 recently. We can confirm that to you. He did. And it was celebrated in a big way with prayers and a grand reception held at a brand new Hotel that has just been completed in Ilaro. K1 was the musician of the day.

What many don’t know is that Kabiyesi, 50th birthday gift to himself was his brand new house in Ilaro. It took him 4 years to complete. When he came in as Oba in 2012 he had to stay in his family house which was not befitting of a 1st class king his status. So he embarked on the construction of a new private palace owned by him. Work has also started on a befitting palace to be built by his community.

Last week, City People visited him at the new big palace where he now lives in Ilaro. It is an imposing and impressive structure. It is located on a hill facing you as you drive into the ancient town. So imposing is the structure that once you approach Ilaro you will be hit by this all white magnificent palace with a lot of royal insignia on it.

The very expensive palace called Rock Of Ages Villa is built on over 6, 000 square meter called Rock Of Age Chapel that can sit 200 people. It is well equipped with musical instruments for the Choir. There is also a small Mosque for Muslim who come on a visit.

Its is a 6 bedroom palace with 4 living rooms. It has 5 quest chalets plus an open terrace.

It is a sprawling house with a Lawn Tennis courts and a Basket Ball court. Because the house is built on a hill, from the terrace inside the house you can see an arriel view of Ilaro. The house is powered by huge industrial generators.

The house also have a big swimming pool area that has swimming pool for adults and kids, with in-pool bars and changing rooms to go with it. It has a separate padding pool for kids.  It also has a world class Gym.

It is a befitting private palace for a 21st Century monarch like him.

His logo is etched on the electronically controlled gates. His royal insignia and motto is Oba Bi Olorun Kosi.

Once the gate is opened and you drive in you will be hit by 2 imposing statutes of a drummer and a trumpeter ushering you into the palace.

Although the Kabiyesi gave the house to professionals to build,  the design has the stamp of Kabiyesi on it. He introduced huge columns and specially designed windows. Don’t forget that the Kabiyesi himself is a real estate player.

On some of his trips abroad over the years, he saw a few ideas he liked and he incorporated it into the design of his new private palace.

Kabiyesi says he embarked on the project to help encourage Ilaro indigenes to come home and build country homes. He said for many years he felt bad that he didn’t have a befitting private houses in Ilaro up until he was named the Olu and paramount ruler of Yewaland. And each time he runs into Ilaro indigenes he is always feels very said convincing them to come back home and build, since he does not have a house of his own and since as a king he does not have a befitting palace too.

He said the fact that he has completed his private palace, has encourage other indigenes to begin to build country homes for themselves. “ Now, they know that Ilaro is safe to come and live and build houses and open up the town to development.”