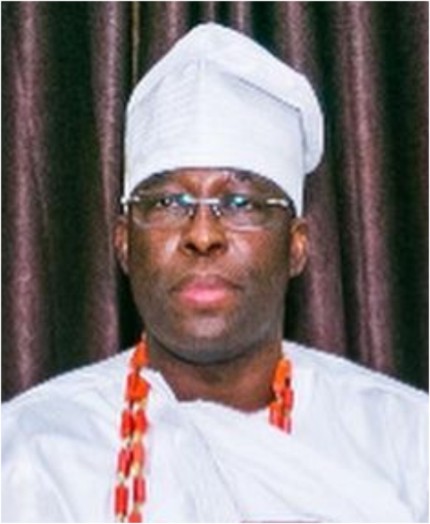 •Narrates His 7 Days Experience In Seclusion

Do you know that a construction giant, Otunba Olamilekan Osifeso, is now the Olootu Olowa of Ijebuland? He has just completed the traditional rites which make him one of the kingmakers of Awujale, Oba Sikiru Adetona. His new title makes him one of the king makers in Ijebu-Ode and its environs.

The Awujale of Ijebuland, His Royal Majesty, Oba Sikiru Adetona, didn’t only honour the top Nigerian construction giant with one title, he honoured him with another big title, “Madasa” of  Ijebuland.

The highly-connected hubby of Abuja celebrity woman of style, Erelu Tola Osifeso, Otunba Lekan Osifeso, was honoured with the title of Madasa exactly the day he stepped out of seclusion. Many topnotch businessmen and socialites such as King Waisu Ayinde, Otunba Babatunde Adesoye and his wife, Otunba Folashade Adesoye, Akinsiku of Lagos, Otunba Wale Saubana, Hon Shina Peller, Alhaji Bashy Kuti and wife, Bisi Kuti and the Osifesos sisters all came out to honour the guru of Retro Construction Company as he stepped out after the final rite.

With the title in his knapsack, Osifeso is now one of the highly revered holders of chieftaincy titles in Ijebuland.

When City People Magazine stormed Ijebu-Ode on the 7th day he exited seclusion, he spoke on how he felt seeing Awujale giving him a fresh title when he went to pay homage after observing seclusion? How did he feel in seclusion for 7 days? What was the experience like. Please read on.

Sir, your new title in Ijebuland, the Olootu Olowa, is a very big one. Please tell us more.

Well, titles are in categories. The one I was given is in the category of the first six Chieftaincies under Awujale of Ijebuland. They are the highest titles in Ijebuland. We have the Olisa , Ogbeni Oja, the Egbo, Olootu Ifo and the Olootu Olowa. We are the king makers and the highest body of advisors to the Awujale.

It is not a title that particularly has to be in my family. It is at the discretion of the Awujale to appoint a suitable person for the post. It was his discretion to appoint my father and also to appoint me. So, it’s not a family title. The same goes to other kingmaker titles too.

Sir, what is going to happen to the construction giant that we know Otunba Olamilekan Osifeso for because of the new title?

Well, it comes with a new set of responsibilities, but nothing is going to change. I’m still going to be the same businessman that you know. The person who wakes up in the morning and goes to work. But I’ll be coming to Ijebu more often.

You have been in seclusion for seven days without seeing the sun and you have been communicating with your God. Which lesson would you say all these have taught you?

You know, everyday we grow. I’m not the same Otunba that I was last year. I’m more matured and with more responsibilities now. Now my responsibilities are not to my immediate family members alone, but to the whole Ijebuland. And my full loyalty is to our father, Awujale of Ijebuland. He is a wonderful father and he has done so many wonderful things for Ijebuland and it is our responsibility to assist him in the wonderful works he has been doing.

Sir, you carried the staff of office when your dad was made the Olootu Olowa. Which year was that?

Well then, my father was first the Madasa in 1985, 36 years ago, before being promoted to Olootu Olowa in November, 1996. So, the photograph you saw was when my father became Madasa in April 1985.

Looking at that photograph now, what came to your mind?

Well it touches me. It was my sister who showed me the photograph. I was even surprised that she still has them. I was very happy. I didn’t know at that time that I was going to, one day, get the title. I was about 17 years old then. But I give glory to God.

The day you were called to become the Olootu Olowa, one of the biggest titles in Ijebuland, how did you feel and what went through your mind?

I was shocked. I didn’t know what was going to come to me. The day the Awujale gave me the opportunity, I was very grateful. That’s why I have to bring very high-power delegation to say thank you to Baba. And Baba kept on with the relationship he had with my father. My father taught us loyalty, which is very key. He was very loyal and she taught us that anyone you can’t be loyal to, you shouldn’t move close to that person. My Father was loyal to the Awujale and I’m going to carry on with that. I was shocked and I really thank God.

You are now a traditional person. We have seen several people coming to pray for you. We have seen your sisters, family members and friends surrounding you. What came to your mind when you saw all of them with you?

What do you want to say to your reputable friends, who have been trooping to Ijebu to support you since you were here?

Well, you see in life, whatever you do for people, people would do for you. You have to be loyal and keep your friends. I have elder, younger and friends who are my age mates. I give glory to God for them. I thank them and deeply appreciate them because they came all the way from Lagos.

I also have my Aburos such as Shina Peller, Otunba Muyiwa Ibehu, and Tunde Akande. The same goes for Prince Omogbolahan, his father, the Oloja of Epe, is my father. I am the first born of his family because that’s the respect that they gave to me . So we are all a big family.

It is so amazing to be speaking with the Olootu Olowa of Ijebuland. We can’t wait for you to step out of that door. It’s been seven days of praying and all. May we see more of you sir.

I also can’t wait to step out. Thank you very much, it’s been a pleasure.

How did you feel again when Awujale gave you a new title of Madasa of Ijebuland. That was a title your daddy had before he was elevated to Olootu Olowa?

I am just so happy. This is the happiest day of my life. As you can see, I came with powerful Entourage to Awujale private home after undergoing all the rites to become the “Olootu Olowa” and here I am with our Father, the Awujale, and he has bestowed on me again the title “Madasa”. That was the title my father had before he was promoted to Olootu Olowa. To say that I am so delighted is like stating the obvious. I appreciate his Royal Highness, Oba Sikiru Adetona. May we see more of him. We are just so grateful for this.