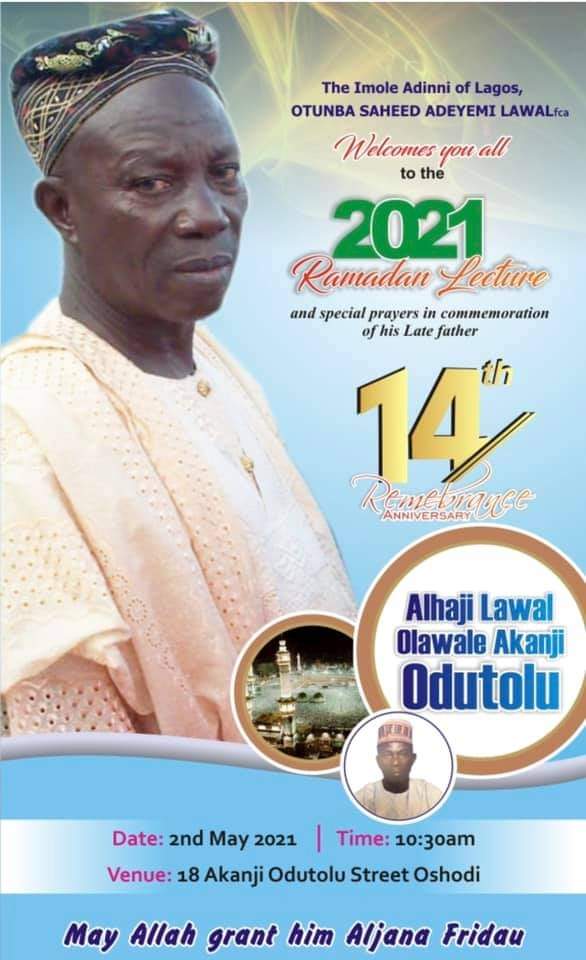 The event was held on Sunday 2nd May, 2021 at the late Alhaji Odutolu’s residence in the centre of Oshodi In the presence of family members, neighbours, friends, not leaving out members of the Ansar- u -deen Society of Nigeria across the state.

Aside adminitions and prayer sessions held for the departed soul and the entire family of late Alhaji Odutolu, food items such as Rice, bread, drinks, and packs of noodles were distributed to nothing less than 600 people at the event.

Speaking at the event, Otunba Yemi Lawal extolled the fatherly qualities and moral uprightness of his father which he said have influenced him and his siblings in many ways.

To however mark the 14th year remembrance of his father, Otunba Lawal has identified 15 individuals whom he intend to send to Hajj in 2021. This is said is to help these individuals achieve their dream of fulfilling the 5th pillar of Islam which is Hajj.

Otunba Lawal is a man with many caps of honour whose philanthropic contribution to the society has earned him Imole Adinni of Lagos, and a traditional chieftaincy title of Ekerin Bobagunwa of Egba land among many others notable .Obviously, the prayers and gratitude of the beneficiaries of Otunba Lawal’s benevolent acts have continued to fuel his successes and accomplishments in his businesses. At present, he is reputed as being the biggest property owner in Oniru Estate, Victoria Island.