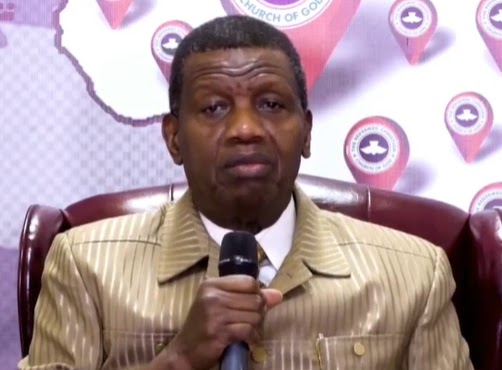 General Overseer of The Redeemed Christian Church of God (RCCG) Pastor Enoch Adeboye on Thursday night presided over a church programme, hours after the announcement of his son’s demise, Dare Adeboye.

Adeboye preached at the Holy Communion Service (May edition) of the church’s popular Holy Ghost Service with the theme ‘Overflowing Blessings’.

The Nation reports Dare, 42 was said to have died in his sleep on Tuesday, May 4 in Eket, Akwa-Ibom where he was pastoring a church.

Dare’s death came as a rude shock to many who penned heartfelt condolences to the bereaved family.

The programme, which was monitored by The Nation, observed that Adeboye spoke from the studio of the church’s station DOVE Media, while members of his church gathered at the auditorium along the Lagos-Ibadan Expressway.

Adeboye while preaching from John 6: 5-13, stressed the importance of the bread and wine of the Holy Communion.

The General Overseer also known for his in-depth teaching prayed “The bread multiplied in the hands of the disciples, as you receive the bread, it will multiply in your hands,”

Adeboye also prayed for healing for all those who are sick all over the world; prayed for a new power to witness for God with signs following. “So that the world will know that greater is He that is in us than he that is in the world,” he said.

He however didn’t make a comment about his son’s death but focused on the message.

After the sermon, the officiating minister in the auditorium said, “Tonight, daddy has prayed for us. He has also prayed on all the elements that we are going to use – the bread and the wine.

*I am here not standing in for him because I am too small to stand in for him; I am only here to deliver the message as a messenger.

“He could have been here physically as he used to but due to circumstances beyond control, he was not able to be here but to the Glory of God, he has said to us, Jesus is here and he is also there praying for us.”

READ ALSO: HOW THE MEDIA GOOFED ON DARE ADEBOYE’S POSITION IN THE FAMILY