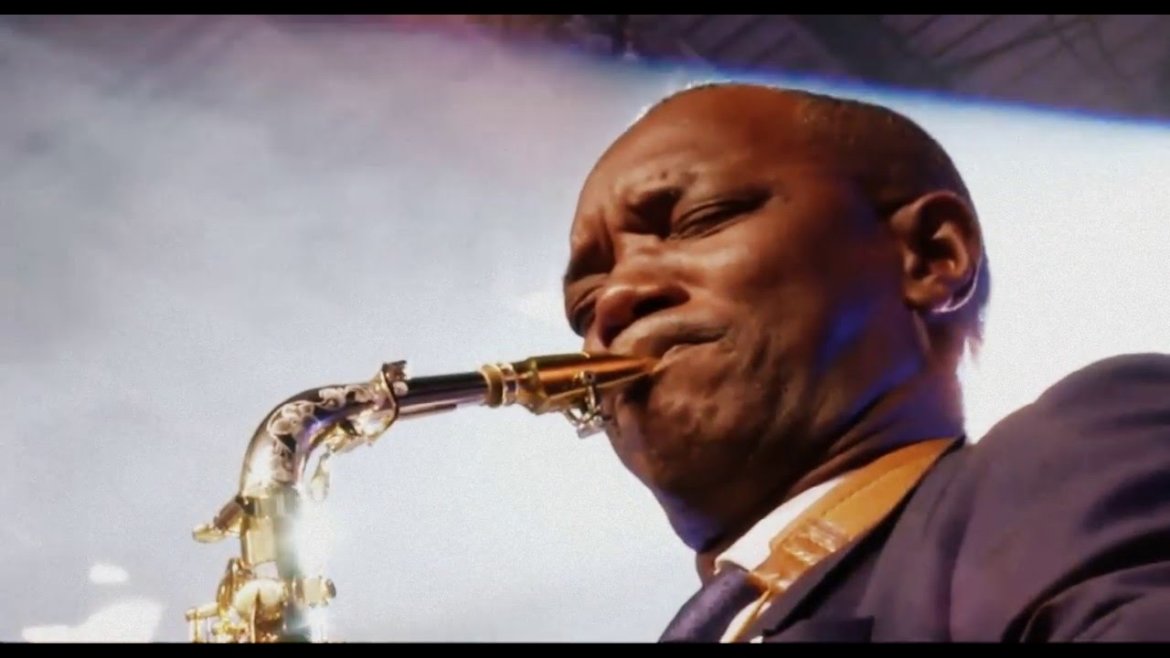 Last Sunday, Pastor Kunle Ajayi celebrated 30 years of his music career. It is not as if he started playing music 30 years ago. No. Its 30 years of playing music professionally since he began to record. Predictably, the event which took place at Eko Hotel was grand. He has every reason to celebrate it big. What else do you expect from Pastor Adeboye’s official Saxophonist and head of the RCCG choir. If you’ve noticed anytime Pastor Adeboye is billed to speak anywhere, before Pastor Adeboye begins any ministration, Pastor Kunle Ajayi usually heralds the coming in of Daddy G.O with his Sax by doling out sonorous tunes that sets the tone.

He has been doing this for years. Not many know he studied music in school and went to do a special course on the Sax abroad a few years ago what many do’t also know is the extent of love Pastor Adeboye and his wife have for this Idi-Oro, Lagos-born ace Saxophonist.

So in love is Pastor Kunle Ajayi with the Sax that he has lost count of the actual number of Saxophones that he has. For those who know how expensive a Sax cost they will know how rich Ajayi is worth going by a rough estimate of how much a piece is. He himself admitted that the cost of one can be as expensive building a house.

Kunle Ajayi,  born June 16, 1964 is a gospel singer, songwriter, saxophonist, televangelist and Director of Music at the Redeemed Christian Church of God. He was born in Mushin area of Lagos State. He attended Mushin Local Council Primary School, Idioro for his Primary Education before he proceeded to Eko Boys High School where he obtained the West Africa School Certificate. After leaving high school he went to Ijanikin where he studied Music. He formed a band called ‘The Ambassador’ with his group of friends and produced his very first album. He later married his sweetheart at The Apostolic Church, Idioro, Mushin. He was ordained as an Assistant Pastor of the Redeemed Christian Church of God in 1991 and later became a full Pastor in 1997 having completed a one-year program at Faith Bible College.

He later studied music at Adeniran Ogunsanya College of Education, Ijanikin. He later proceeded to the Royal College of Music, London where he obtained a Certificate in music.

He started playing musical instruments particularly, the Saxophone in the early 1980s but stopped due Lung-related ailment that almost resulted in the damage of his larynx. He had contributed significantly to Nigerian gospel over the years and he is currently the Director of Music at the Redeemed Christian Church of God.

In recognition of his immense contributions to gospel music in Nigeria, he was bestowed with the Award of Excellence by the Redeemed Christian Church of God in 2007 and in 2008, he received the “Leadership award in Nigeria music”. Last week, Pastor Kunle Ajayi spoke to City People Publisher, SEYE KEHINDE about his life and music career. Below are excerpts of the interview.

Congratulations on the celebration of your career in music. 30 years is no joke. How do you feel?

Well, I feel grateful and thankful to God. If you know my story you will know that God has been so kind to me. My story is that I had a LUNG problem when I was very young. I was asked not to do anything strenous. I knew I couldn’t do any strenous thing. I cannot blow. Even ordinary balloon I couldn’t blow. I would faint. I couldn’t whistle. I would faint if I did that then. And then miraculously God healed me. I have been playing other musical instruments from my childhood. I used to be a Sekere Boy and I advanced to Opral drums. I play all kinds of instruments like the Guitar, I was very good on the Guitar, but I couldn’t blow easily because I fainted easily. It was a lung problem and a liver malfunction. But I used to see Fela blowing Sax.

But miraculously God healed me and I promised him that if he can heal me I will continue to serve him. I have been playing all types of music. I can play Guitar. I have been playing keyboard only that I couldn’t play saxophone. Between 1979 and 1980 the General Overseer of Redeemed Church, Pastor E.A Adeboye, came one Sunday to the church and gave me a Recorder.

Do you know what I call a Recorder? A Descant Recorder. Some people call it a Flute. The real name of that instrument in music is the Descant Recorder. Lay men call it flute. Its not a flute. It has its own group. After I studied Music I got to know. It has its own group and esemble. I could not use it. I couldn’t blow it, so I just kept it somewhere. I kept it away. I live in Idioro, Alamutu. I do go to Fela Anikulapo Kalakuta on Mosalasi road. I used to watch him play. When he blows, it inspires me.

I just told God one day that if you can heal me I will blow for you. I just said it, I didn’t know God was waiting for that. Then later on I suddenly found out that things I couldn’t do I started doing it. I found out that I don’t feel tired like before. I began to whistle. Before then, I can’t bend my head for too long. When I raise up my head I will faint. People used to ask what is wrong with this young boy. So after I got healed I found out that the first thing I picked was that Recorder. Thats my 1st wind instrument. I blew it and it was ni le. At first, I was afraid. I thought something will happen to me. I tried again and again. 10mins, 20mins I was expecting some thing to happen. So God healed me. And to fulfil the promose I made to God, I had to look for a Saxophone. That is why I picked on a Saxophone.

Actually, I have been in music before 30 years. The 1st album I recorded with Saxophone was in 1980. This is what we are marking. We are marking the healing power of God. From that time I have been ons tage non-stop and I have been blowing. To the glory of God, I have travelled a bit all over the world with just that Saxophone. Many people don’t know I can play other instruments apart from that Saxophone.

Can you recollect how you met Pastor Adeboye?

Haaa! Its awesome. I met Daddy in the church. I was just there. I think God sent him to me.  don’t really know how it happened. Daddy just came to church that day and out of everybody in the church at the Redeemed Christian Church of God, Ebute Metta, and he just said, this young boy come. He just developed an interest in me and the interest developed. It can be only God. Then, I was nobody. I knew nobody. I was there in my Olenteleafa (that long flowing long kaftan that you wear pants under). He just saw me and said, young man come. Come and play Guitar. Let me tell you, he and Mummy G.O they have been involved in Children department. They love children. I met them in that church. I came to that church first in 1974.

My mother was ill. I was still living with my brother. So, I came with my mum. I came and I left. So, when I finished my Primary School in 1976 I joined the church fully. Since then, I have known Daddy and Mummy. Daddy G.O has been like a Dad to me. He will call us the little ones. He will organise remedial classes during holidays. He just picked special interest in me.

There were always remedial classes during the holidays and on weekends there were classes for us. He just took special interest in me then and I don’t know why. He said come and he discussed with me and he was always discussing with me. I knew he had seen some thing in me, something I had not seen. So it can be only God and since then we have been close. He has been a father to me and his wife, Mummy has been a mother to me. Think of anything a father can do for a son, spiritual or physical, he has done it.

Do You Know Eating Agbalumo Is Good For You?