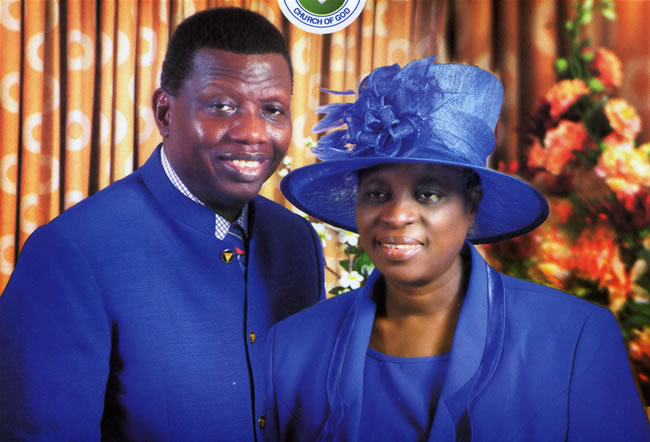 Pastor (Mrs.) Foluke Adeboye’s life is one that represents the trophy of God’s grace. Thousands of people gathered on Friday, 13th July, 2018, to celebrate her beautiful life at 70. It was one of the humbling moment for Mama Adeboye as she shed tears of joy during the service of 70 hymns organised as part of the activities to mark her day. Her platinum jubilee was an iconic one and she was full of thanksgiving and praise to the Almighty God for honouring her in a special way.

Pastor (Mrs.) Foluke Adenike Adeboye, the wife of the General Overseer of the Redeemed Christian Church of God, Pastor E. A. Adeboye, is popularly called Mummy G. O, she is a woman of many parts. She is hospitable, an intercessor, a tireless evangelist, a dynamic administrator, an astute manager, a disciplinarian, a good cook, loving, a giver, a missionary and above all, a passionate and a trained teacher.

In one of her testimonial in the her book: “For such a time like this-a portrait of pastor Folu Adeboye, she wrote, “I give God the glory for my parents, Papa Jacob Adelusi and Mama Felicia Morounfola Adeyokunnu. They were devout Christians, who I believe knew the Lord before they died. I was born into a family of 10 children, all of whom are believers. They have richly touched my life for good.

The Lord gave me a wonderful husband, whom I love and cherish so much and for this, I am very grateful. He has been very good to me and I could not have chosen better for myself.  The role I have played in our marriage is a supportive one, but the grace of God and it has been a very fulfilling journey. I thank God for my children, who are great blessing. The Lord really gave me the best of his children and they have been wonderful and very precious too.

I want to say thank you to God with my life in so many ways He has shown that He loves me. He saved my soul, delivered me from death and has used me as a vessel of honour. There is so much that He has done for me, how many things can I count? I love Him with all of my heart, I want to love Him more and know him more, I want him to use me for his glory. I want everyone to know that by his grace I am what I am. I have not done anything exceptional, I can only testify that God has been faithful. Glory be to His name’.

Mama Adeboye is the leader of all the women in ministry in the Redeemed Church worldwide and handles all the activities that have to do with women and coordinates the in all the countries they have the church. Mummy G. O. is in charge of Women Affairs. She host to the Annual Women in Ministry Programme for all Female Ministers in the RCCG all over the world. The programme is aimed at training RCCG Pastors’ wives and midwives.

She’s the Editor-in-Chief of Courage Magazine, the official publication of RCCG women, which helps in disseminating information on current issues as they affect Christian Women. She’s the President of a welfare ministry called Certain Women. The Women in Ministry Conference is 20 years old as it was establishment in 1998. But not many people know about Mummy G.O’s early beginnings a part from being Pastor Adeboye’s wife and RCCG Mother in Israel.

In the same book, excerpts from chapter one and 2, talk extensively about Mama Adeboye’s early beginning and growing up years. She wrote:

“On Tuesday, 13th July, 1948, a beautiful baby girl was born in Ilesha, Osun State to Papa Jacob Adelusi Adeyokunnu and Mama Felicia Morounfola Adeyokunnu. The child of destiny, who was the first among ten siblings was on the 8-day named Foluke Adenike children, born into the family in total were 4 sons and 6 daughters. Today, all the ten children of Papa and Mama are born again and serving the Lord in their own right.

To the glory of a God, they are all very well educated and successful in various endeavours and walks of life. Papa Adeyokunnu was also the first horn of his father, from the royal family and lineage of one of the great kings of ijesha land, the Owa Obokun Ajimoko. This making baby Foluke a Princess. Papa had a very long and successful career as a teacher at the Methodist Mission of Nigeria. He was not just a member of the Methodist Church but also a catechist, which is what is known today as deacon or an assistant pastor. He officiated in the church every Sunday. He also made it compulsory for his entire family members to go to church every Sunday, raising them all as staunch Methodists.

Papa Ayonkunnu was convinced that Christian education would provide the best foundation for young Foluke and as such he ensured that she attended the best elementary school at that time, Methodist Primary School, Ilesha. Young Foluke had a brilliant mind and was always at the top of her class, to the joy of her parents. Upon her successful graduation from there, Papa enrolled her at the Methodist Girls School, Ilesha to continue her studies. Here, again young Foluke excelled much to her father’s satisfaction and pride by this time, Foluke had proved herself to be a very brilliant and highly intelligent young lady.

The entire family and community began to see her as a role model for her peers and the younger children coming behind, following her education, at the Methodist Girls School, Foluke proceeded to attend one of the best teachers’ training colleges in Western Nigeria-the United Missionary College, Ibadan (UMC) from 1964 to 1966. This college, in those days, was like a university for women. Again, this was a Christian Mission School and Foluke completed her program in flying colours, graduating as a Grade Two Teacher’s certificate by age of 18, while attending the UMC, she was actively involved in various extra-curricular activities such as athletics and drama and she also served as the Sunday School Supritendent.

Foluke was very popular at UMC known for her great sense of humour, friendly and jovial disposition in the course of her studies at the UMC, Foluke served at various times as house prefect, food prefect and college supritendent. She was also a committed member of the Scripture Union (SU), a National Devout and Conservative Evangelical Christian students group. Her areas of study were Science and Mathematics and she graduated with a Grade 11 teacher’s certificate in 1966”. Alongside her active involvement in the church, she had a full time job as a teacher and was raising her children being a wife and home maker. Foluke would study her Bible late into the night because she was a good Sunday school teacher and would also take notes for choir practice.

With the time she enrolled at the University of Lagos to study Mathematics and Chemistry and was in her third year, the Lord showed her that her husband, Enoch, would succeed the founding general superintendent as the next leader of the Redeemed Christian Church of God. In the course of her career, she had taught at the Methodist Primary School, Ilesha,  Anglican Primary School, Anglican Modern School and St. Lukes School all in Oke-Igbo, Ondo State. Ansar ud deen Primary School, Lawanson, Lagos, St. Timothy’s College Iwaya and University of Ilorin Staff School before she resigned her appointment and went into full time ministry.

In a phenomenal way, Mummy G.O. has contributed to the success of Daddy G.O. as they are fondly called in the ministry’’. She is the visionary and international chairperson of the Africa Missions. She brought the women of the church together as a ministry called the Good Women and today all RCCG parishes have women ministry. She was the first woman to be ordained as Pastor in Redeemed Church. She has been the brain behind major built up of schools in the Redeemed Church and has positioned it on a high level, owing due to her interest in education. Pastor (Mrs.) Adeboye has passion for establishing Christian Schools and sponsoring the education of many, who would not have been able to get a formal education owing to several reasons.

In 1982, she established a children-play-group at the headquarters of the Redeemed Christian Church of God in Ebute-Metta, Lagos, with a few children. From there, it grew to be a Nursery School in 1985 and a Nursery and Primary school in 1992. The school was moved to Iwaya, Yaba, in 1994 and it now has over 150 pupils. Having relocated to Redemption Camp from Lagos, her enthusiasm for a qualitative education came to bear again.

Over the years, she has been instrumental to the establishment of several Nursery, Primary and Secondary Schools of the RCCG in different states of the federation and her support for the schools has not waned. She also played an active role in the establishment of Redeemer’s University. It is on record that she has sponsored over 30 run students, while she is also responsible for the payment of school fees of some boys in the Habitation of Hope; a rehabilitation centre for street boys. In order to make room for effective administration, all the schools now operate under the umbrella of Christ the Redeemer’s Schools Management (CRSM) with Pastor (Mrs.) Adeboye as the Director of Schools and Chairperson. At presently, CRSM coordinates the activities of 41 secondary schools and 222 Nursery and Primary schools.

She has a Child Evangelism Training from Child Evangelism Ministry in Holland, Diploma in Education (Science & Mathematics) University of Lagos, and Honorary Professor of Education with a Professorial Chair of Education for Development at Christ, the Redeemer College, London, a Partner College of Middlesex University, London and many more. She is happily married with lovely children to show for it, Deolu, Bolu Adubi, Dare and Leke are all pastors.

Why Eating Garden Egg Is Good For You