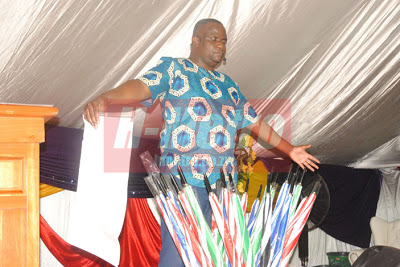 Several congregants at Goodness and Mercy Ministries in Zimbabwe have parted with US$10 (about N5000) each to buy “anointed umbrellas”.

The umbrellas, the church leader Prophet Freddy said, had divine powers to protect owners from lightning strikes and storms during this rainy season.

The umbrellas were also said to have the ability to protect congregants from evil spirits.

“God instructed me to pray for these umbrellas and there will be no member of this church who will buy the umbrella and get struck by lightning or will be tormented by demons.

“2017 is a year of overtaking and this year we shall overtake if you have faith, God will use these umbrellas to perform miracles, signs and wonders,” said prophet Freddy.

H-Metro reports there were loud cheers and ululations from the followers who then flocked to the altar to buy the umbrellas.

As congregants stampeded for the umbrellas, some got injured as they were trying to get hold of the first umbrella that the church leader Prophet Freddy had offered for free to his congregants.

One of the ladies who was part of the scuffle, said she was injured as she tried to get the umbrella.

“I was pushed by another woman who also wanted the umbrella and I dislocated my arm but I don’t regret what happened to me and I believe I will be healed since I was injured in the house of God.

“I was not doing something wrong to anyone so I know these injuries will come to pass,” she said