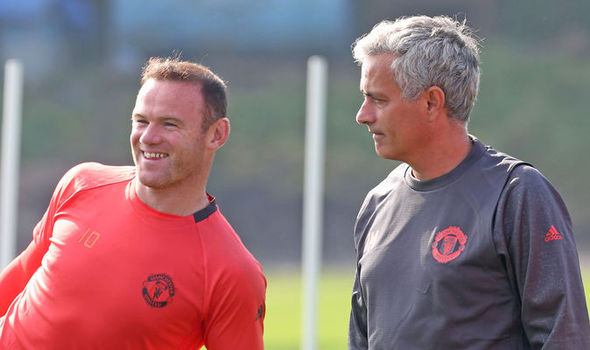 Manchester United manager Jose Mourinho is an “easy target” and the players “have to do better”, says former Old Trafford striker Wayne Rooney.

Mourinho has come under pressure after United made their worst start to a league campaign for 29 years.

“The players, the manager, it has been a tough start to the season,” ex-England forward Rooney said.

“I know Jose is getting a load of stick but I said a few weeks ago, the players have to stand up.”

United fought back from two goals down to beat Newcastle 3-2 on Saturday, after reports by one newspaper he was to be sacked regardless of the result.

Mourinho retained the support of the club’s board before the Newcastle game, and following the win said he can “cope with the manhunt” against him.

The 55-year-old added that if it “rains in London” or there are “difficulties with the agreements of Brexit” it will be his fault.

“The manager can do so much but then it is down to the players on the pitch to produce and probably collectively,” Rooney added in the Telegraph.

“It [the form] is a bit of everything coming together but Jose is an easy target. Some of the players have to be better.”

Rooney, 32, left United in 2017 to join Everton before signing for MLS side DC United in the summer.

He played under Mourinho’s predecessor Louis van Gaal at Old Trafford before the Dutchman, who was in charge for two seasons, was sacked after winning the FA Cup in May 2016.

“I said the same thing when Louis van Gaal was there,” Rooney said.

“He took a lot of stick but behind closed doors, I said to the players, ‘we have to be doing better’.

“Personally I think he set us up brilliantly but we didn’t produce on the pitch so I am sure that is getting said behind the scenes.”

“What is Mourinho doing to help the situation? All he does is play the victim. All the nonsense after the game – the Brexit, he gets blamed for everything – I don’t get it.

United are eighth in the Premier League, seven points behind Manchester City, Chelsea and Liverpool, and went out of the Carabao Cup on penalties to Championship side Derby last month.

Sutton says they have “been rotten all season” and “got away” with a result on Saturday by scoring three times in the final 20 minutes to beat Newcastle.

“There has to come a time where there is a line drawn in the sand and he has to stand up and say ‘enough is enough’,” added the former England international, who won the Premier League with Blackburn in 1994-95.

“All this ‘I’m being persecuted’ all the time – he’s not doing himself any favours.

“Mourinho isn’t the right man to take United forward and 15 minutes shouldn’t paper over the cracks and the way he has behaved this season.

“It has been appalling.”

“Players Have To Do Better” – Wayne Rooney Speaks On Manchester United Crisis was last modified: October 9th, 2018 by Damilare Salami