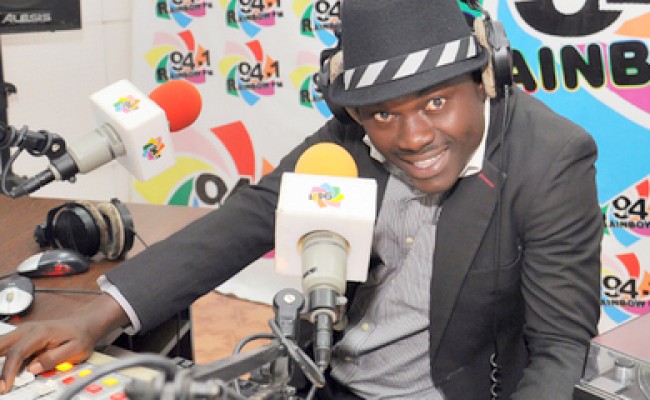 The popular stand-up comedian on radio, De Don whose real name is  Iruuwe Okeremute has made a name for himself on Rainbow 94.1Fm. He is from Agbarha-Otor in Ughelli in Delta State. He is the 9th child out of 12 children.

Besides performing alongside top comedians such as Ali Baba, Basorge, AY in difference shows, he has also anchored lots of corporate events in Nigeria.

In this chat with City People Magazine Publisher Dr. SEYE KEHINDE and Reporters BIODUN ALAO and POMAA PRECIOUS, he talked about his current project, A series titled “The Real Don” which according to him talked about the background of  “De Don” what he went through to discover his God given talents, his journey into the entertainment industry, challenges he has been through, and his future plans to go into movie production proper.

Below are the excepts.

Can you tell us about the movie you are working on now?

It is called “The Real Don” It is a television series, it is a background story of a stand up comedian  “The Don”. We tell various situations, people can naturally relate with. A young man that wants to be successful but with no clear vision, but later, he realized, he has a talent and he can make by exhibiting that talent.

We have done the 1st and 2nd season and this happens to be the third season and we have Tony Akposere the great veteran actor as one of our major casts, then Stanley Isoko as writer, and we also have lots of talented up coming actors in the series as well.

It’s up to 14 years old, I have been around like over 14 years, but this is like my first Television series.

Which other production have you worked on?

I have worked on “Do Good” on African magic, it is also a series, it was aired everyday. We did the recording for like 8 months and that was in 2015.

What challenges have you encountered producing series like this?

The challenges are much, but the topmost are the people. Managing people is pretty difficult, then secondly it is the financial aspect. A project which will last for like a month, we need to rent equipments as government is not supporting us in anyway.

Apart from Bank of industry, which will even take like 8 months before you can get the capital or loan with too much documentation. No other bank will help you.

It is really really difficult, these are like two major challenges out of many.

The Don grew up in Abraka in Delta State I attended Abraka Grammar School, then I went for my University (LASU) Ojo Campus. Basically my dad is a Polygamist, but I never knew. Until I was 12 years old.

After secondary school. I got involved in some youth exuberance, and that was when my elder sister came into the picture, to rescue me from peer group.

I started doing stand up comedy. I studied Economics, during my days in LASU. I remember I used to do comedy back home, but I did it for fun back home. In fact the first time I did comedy in Lagos I was paid 3 thousand naira. I was amazed, because I never knew you can get paid for doing comedy.

It got to a point I realised it is good to have a project owned by you as an artiste. So I owe the first ever stand-up comedy show on radio in Nigeria, that’s “Comedy half hour on Radio. FM”. Later, I was like let me have a television series. As time goes on, we will begin to do movies, and some other projects that will pay the bills when we are like 70.

How do you source for material for your daily programme?

When I started in March 7th 2011, at first I was telling regular jokes, and it was three times in a week. The demand was really much. We had lots of brands coming up on the show, and NBC will not allow you put more than 9 minutes adverts in a 30 minutes show, so we stretched it to 2 hours, the situation was for us to make more money. Instead of 3 times weekly, it became every day.

Doing it everyday, creating Jokes that will sustain it everyday became very difficult for me, so we veered into news, there are various news, and funny situations everyday that we realized from news, take for example Baba mentioning that Amode is the Governor of Sokota State, Snake Swallow 30 billion naira, there are lots of funny stuffs on our news every day, so we just pick them up and analyse, while people contribute, and this makes our job more easy for us.

What made you go into Radio Comedy in the first place? The issue of piracy prompted me to start up my programme comedy happy hour with “De Don”. The issue of comedians doing other comedian’s jokes without credit pushed me to radio, I had the idea of a radio show to actually entertain people in traffic, at the same time, get people to know my original materials, so I went into radio and called it Comedy Happy Hour with De Don, and it is actually the first ever comedy stand up show on radio in Nigeria.