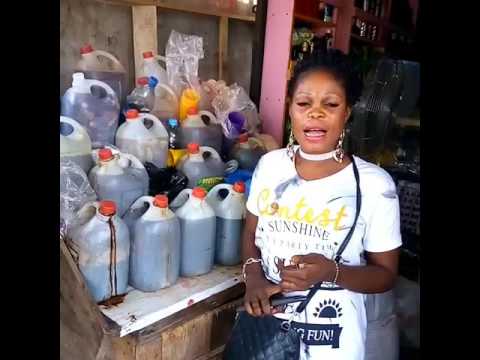 City People’s trendy society writer, Abiola Orisile has shared a video of trending herb seller, Soboton, who featured in a viral video, where she advertised her ‘Jedi’ product with lewd instances.

It will interest you to know that she now sells her herbal mixture to Senators, Directors and other big shots in the society. It turns out that the video has changed her status.

Yesterday, I was coming from the office and along Iyana-ipaja road. I saw one of the leading female Maritime top shot, Mrs Elizabeth Adebuhari Obanla at one of her shop FASHTOOR and I decided to say hi to her. Just as I was saying hi, a call came in and it was Soboton, the herb lady whose viral video set the internet agog last year.

I ask if she knows her and she said she sells herbs for the rich. That was how my journalism instinct told me to have an interview with her. Highly respectful Taye has a house of her own in Agege. She drives around town in big cars. Her shop was filled to the brim and many big cars of the client were packed along the road.

That was how I told her to let me talk to her. She wanted to know who I was and after getting to know I am a journalist with City people, she obliged to conduct the video interview though she just want to speak Yoruba. Do you know she makes herbs for Senators? This is worth it