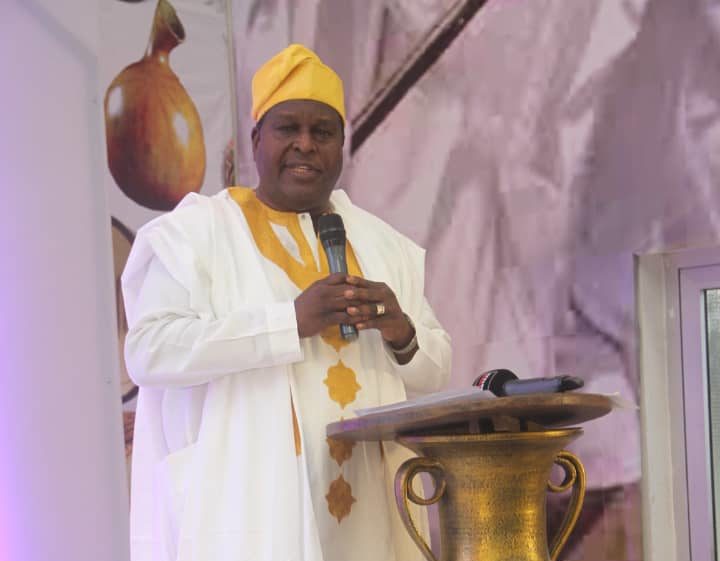 Over the last few days,congratulatory messages have been pouring in for OTUNBA OLUSEGUN RUNSEWE
over his re appointment as the DG of the National Council for Arts and Culture NCAC.
This is because many feel that his reappointment is well and richly deserved.Truly so. He has done a lot to transform the Council.
Everyone who has known Otunba for years will readily attest to his vibrancy,hardwork,creativity and dogedness with which he pursues his goals. No wonder many call him the goal getter.
He has many other things going for him.He has a rich pedigree.

Born in Kaduna to the family of Pa Bankole Runsewe from Ogun State, Otunba Olusegun Runsewe attended St. Michael Primary School, Kaduna before proceeding to Vohoeven Technical College Minna, now Government Technical College. He holds an MBA in Marketing from Edo State University; Higher National Diploma in Management Studies from London School for Executives. He also has a Diploma in Public Relations from the London School of Management Studies and a Professional Certificate in Estate and Property Management from Kaduna Polytechnic.

Otunba Runsewe has remained a consistent phenomenon in the Media, Culture and Tourism Sectors in Nigeria in the last three decades. He worked as Marketing Manager at the New Nigerian Newspaper and rose to the position of General Manager at the organization. He also worked as Head of Public Relations (Media) National Theatre; Managing Director/Chief Executive Officer, Sports Weekly and was Publisher and Editor-in-chief of National Network Newspapers. He was also the Media Coordinator, Commonwealth Heads of Government Meeting (CHOGM) 2013, Abuja, Nigeria.

Otunba Runsewe was appointed as an Executive Director at the National Orientation Agency in 2000, a position he held until his appointment as the Director-General of the Nigerian Tourism Development Corporation (NTDC) in August 2006. His tenure at the NTDC was a watershed in the development of the Tourism Sector in Nigeria. His aggressive Tourism marketing campaign, anchored on the catch-phrase “Tourism is Life” gave the Nigerian Tourism Industry unprecedented national and international visibility. The tenure positioned Nigeria as one of the leading faces of tourism and a preferred destination in Africa. With consistent annual exhibitions at International Tourism Expositions like FITUR, Madrid Spain; ITB Berlin, Germany; Arabian Travel Market, Dubai; World Travel Market Orkland London, etc, Nigeria, during Runsewe’s tenure, began to seriously contend for world’s attention as a destination of preference. The era witnessed the harvest of commendation letters by the Nigerian Tourism Development Corporation, including those from the World Travel Market, London and FITUR, Spain.

Otunba Runsewe was also the pioneer Chairman of Abuja Carnival Planning Committee, the Carnival edition that has been adjudged by the international community to be the best organized since its inceptions. The Nigerian Tourism Village, which he put together during the 2010 World Cup in South Africa, was rated as one of its kind at the event.

A detribalized Nigerian, he holds several titles from different parts of the country, including Danbura Kabi, Kebbi State; Obiagu one of Igbo Ukwu, Anambra State, amongst others. He is currently the Director-General of the National Council for Arts and Culture (NCAC), a position he assumed in 2017. Under his leadership, the vision of the Council is to reposition culture as a tool for national unity, peace and social integration, and machinery for stimulating rapid socio-economic growth and development. He has been pursuing this vision with total passion and utmost vigour.