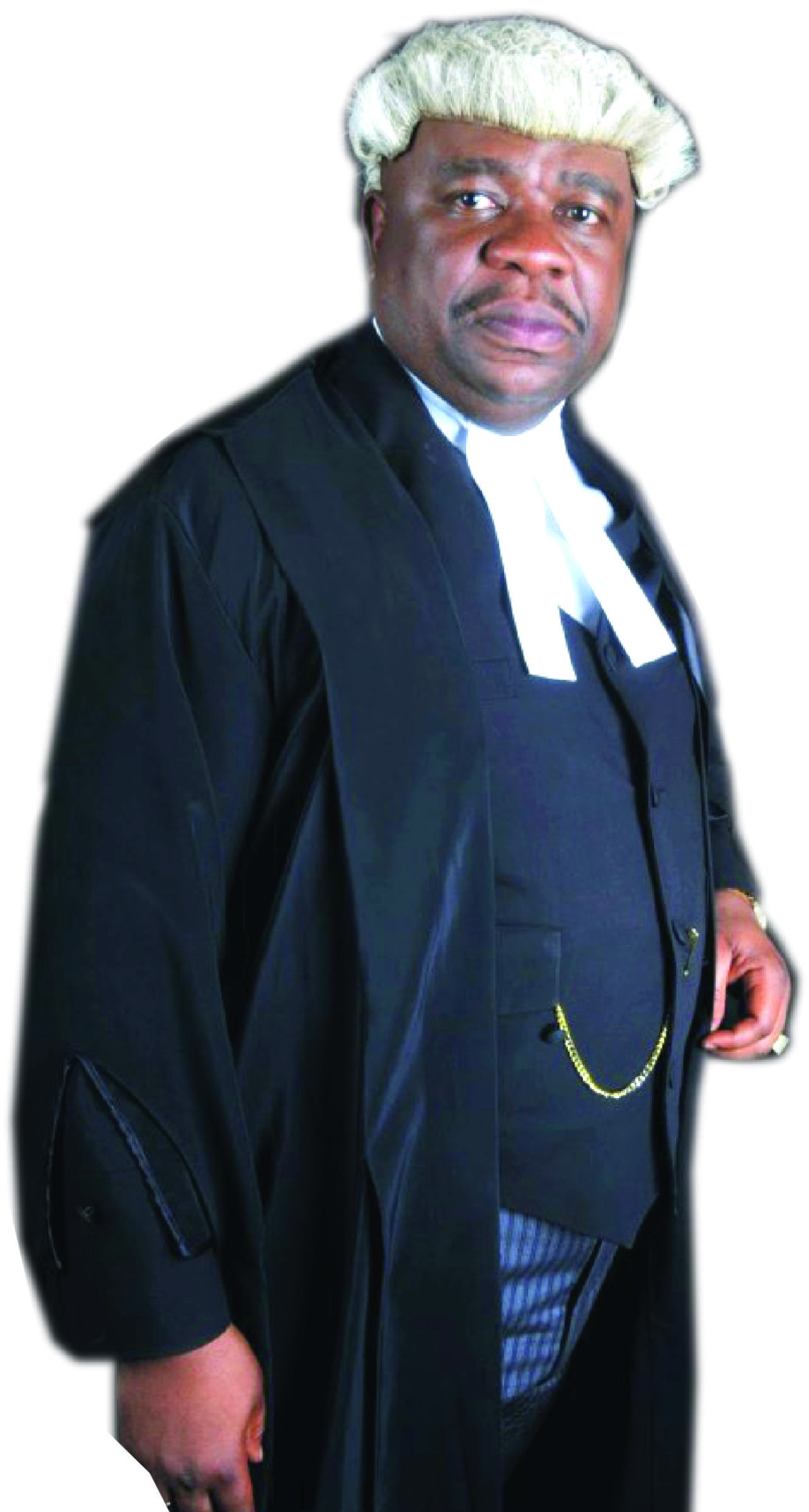 Chief Bolaji Ayorinde (SAN) is a respected legal luminary from Ibadan, Oyo State. He is from the illustrious Ayorinde family in Ibadan. For decades now, he has run a very successful legal practice in Lagos but he has not forgotten his Ibadan roots.
Though he is not a politician, he has been under pressure to join politics fully. Many Ibadan elders can’t just understand why the respected Ibadan lawyer had given politics a wide berth for years now.
And since 2015, they had mounted pressure on him to run for political office. They wanted him to run then for the governorship in Oyo State.
But he declined after weighing all the options. But right now, the clamour for him to run has become renewed. They want him to run come 2019. City People can authoritatively reveal that although he seems interested in running, he still has not made up his mind. Though up till now Ayorinde has not made any official statement on whether he is contesting for the Number 1 seat or not those who should know have revealed that work is going on underground and there is wide consultation going on.
He has embarked on serious consultations amongst those that matter in Oyo politics and according to what we gathered, the feedback has been very, very encouraging. While all these developments are not surprising to those who know Ayorinde’s antecedents as someone who is more than qualified for the job if he is so interested, the major question, however, is on which political party he is likely to run? Ayorinde is believed to be very close to all the major players in the state from the governor to the last aspirants. He is also close to a former governor of Oyo state, Rashidi Ladoja of the PDP. Currently, he is a valued member of the Nigeria Intervention Movement Third Force Movement. He is watching unfolding events, a close associate says.
Whether he has aligned with a political party, movement, coalition or not Ayorinde has many other things going for him; he is a professional to the core, he comes from a humble background and despite the fact that he has not held any elective position he has always been close to the corridor of power in both state and federal levels. And having worked closely with different government at different level whether as their counsel or consultant, Ayorinde understands how it works in the political circle. He is a stakeholder as far as Oyo politics is concerned, having being born into the prominent Ayorinde family of Ajimajasan Compound, Agbokojo Ibadan, his father was the Honourable Justice Timothy Adebayo Ayorinde, former Chief Judge of Oyo State and Former Chancellor Diocese Ibadan, Church of Nigeria, Anglican Communion.
His great mark as the Pro-Chancellor, Chairman Governing Council Ladoke Akintola University of Technology, Ogbomoso between 2007 to 2011 is still on record. He also served as the Chairman of the Oyo State Committee on the Decongestion of Prisons.
He has won many legal battles for several top politicians and their political parties across the country.
Bolaji Ayorinde is also one of the Ibadan-born prominent men to have risen to the pinnacle of their career in the legal profession. He is well read, relatively exposed with a warn character to back it up. He is also well loved by the elites and the grass root in Ibadan. All these some say will definitely be an added advantage for Ayorinde when he eventually declares his ambition.

FAMILY AND EDUCATIONAL BACKGROUND.
Chief Mobolaji Olukayode Ayorinde (SAN) was born into the Ayorinde family of Ajimajasan Compound, Agbokojo Ibadan. His father was the Honourable Justice Timothy Adebayo Ayorinde, Former Chief Judge of Oyo State and Former Chancellor Diocese Ibadan, Church of Nigeria, Anglican Communion, while his mother is Chief Mrs Christiana Adetokunbo Ayorinde.
He attended Sacred Heart Private School, Ring-Road, Ibadan for his Primary School education from where he then proceeded to the famous Government College, Ibadan in 1974 and obtained his W. A. S. C. E. Ordinary Level Certificate. He also attended the International School, University of Ibadan, Oyo State in 1979 and obtained his G. C. E. Advanced Level Certificate, International Baccalaureate, A Levels Certificate in 1981. At International School he was made the Head Boy, that is, the Senior Project of the School in 1980-1981.
In September 1981, he proceeded to the University College Buckland, Oxfordshire England, United Kingdom for his university education where he obtained the University of Oxford, G. C. E Certificate [Law] Intermediate LLB) in 1983.
He also attended the prestigious Holborn Law Tutors, Roupell Street, London for his University of London, Bachelor of Laws LLB Hons Degree Certificate and graduated in 1985. He proceeded to the Nigerian Law School, Victoria Island, Lagos in 1985, where he obtained the Council of Legal Education Certificate of Call to Bar in 1986.

PROFESIONAL
BACKGROUND
For his National Youth Service programme in 1986, Ayorinde was posted to Lagos State and attached to the Private Law Firm of Messrs Akin-Delano, Legal Practitioners at No. 6, Ijora Causeway – Lagos. During this period he was a Junior Counsel in the Firm of Akin-Delano, Legal Practitioners with Offices in Ibadan and Lagos. He worked directly under the Principal, Chief Akin – Delano (SAN) and in 1989, he was seconded to take charge of the Lagos office. The Firm is renowned for its Commercial Practice spanning for a period of over 40 years. He worked in the firm up until 1990 when he set up his own Law Firm, B. AYORINDE & CO with offices in Lagos and Ibadan and now Abuja in the Federal Capital Territory and Port-Harcourt.
He was appointed Notary Public for Nigeria on the 25th of November, 1994 under the Notaries Public Act Cap 331 by Honourable Justice Mohammed Bello G. C. O. N. former Chief Justice of Nigeria. On 26th September 2005 he was elevated to the prestigious rank of SENIOR ADVOCATE of NIGERIA (SAN).
In 2007 he was appointed Pro-Chancellor, Chairman Governing Council Ladoke Akintola University of Technology, Ogbomoso, Oyo State of Nigeria where he served for the statutory 4 years until 2011. He was also the Chairman of the Oyo State Committee on the Decongestion of Prisons. His areas of law practice include General Civil Litigation, Commercial Litigation, Company Law, Family Law, Property and Land Law, Banking, Insurance & Liquidation Law, Arbitration, Maritime and Shipping Law, Public Advocacy and Parliamentary Counselling Services.

HIS BOOKS
Ayorinde has written many books as a legal icon, which include “Securing and Enforcing Maritime Claims, “Juriscope 1st Edition-2001 Series”, “Wills and Testamentary Disposition”, “Sovereign Immunity and the Trials of Augosto Pinochet”, “Judicial Precedent, Law Reporting and the Need for Regulation”, “Judicial Bias and Justice Delivery”, A Commentary on the Independence of Electoral Umpire in Nigeria”, “Boko Haram, Terrorism and Fundamental Human Rights; the Challenges that concern us”, “Criminal Justice System in Nigeria”, “53, Years after Independence: the many facaes of Judicial Riot”, “Nigerian-Any Strength in Adversity”, “A Reformatory Approach to the Criminal Justice System in Nigeria”, and “The Rashidi Yekini Case and the State of Mental Health Law in Nigeria”.

ASSOCIATION
AND AWARDS
He is a Member of the Nigerian Bar Association (N.B.A), International Bar Association (IBA), Nigeria-British Chamber of Commerce, Nigerian-Belgian Commercial Information and Documentation Centre and Commonwealth Lawyers Association. He has been a Council Member, Section on Public and Development Law, (SPIDEL) of the N.B.A., Chairman Finance Committee, Nigerian Bar Association, Ikeja Branch and he is an active member of the Body of Senior Advocates of Nigeria. He was also a member of the Constitution Drafting Committee, Diocese of Lagos West at the inception of the Diocese. He is also a member of various church societies amongst which are the Christian Unity Band of Nigeria of All Saints, Anglican Church Ikosi – Ketu, Lagos, Youth Christian Society of the Cathedral of St. James The Great, Oke Bola, Ibadan, Ogunpa Descendants Union of the Cathedral of St James The Great, Okebola Ibadan, Fountain of Hope Society, African Church Cathedral Bethel, Lagos and Honorary Member Christian Guild, African Church Cathedral Bethel, Lagos.
He is a Patron of the Men’s Friendly Society and Young Women Christian Association of All Saints Anglican Church, Ikosi-Ketu, Lagos and he is also Patron of the Lady Workers League of the Cathedral of St. James The Great, Okebola, Ibadan.
Chief Bolaji Ayorinde SAN is also a member of several socio-cultural organizations, clubs and societies including Omo Ajorosun Club, Ibadan; Ibadan Golf Club, Ibadan; Ikoyi Club 1938 Lagos; the Prestigious; Metropolitan Club, 1959, Lagos; The Lagos Lawn Tennis Club, Lagos and the Island Club, Lagos.
He is the holder of the Ghana 2006/2007 outstanding African Nations Builders Gold Award; Society of Security Practitioners of Nigeria Award 2005/2007; Augustine Nnamani Chambers; Faculty of Law, University of Ibadan Distinguished Personality Award 2008; LAUTECH Alumni Award for Excellence in leadership and Administration 2007; Federation of Oyo State Students Union Platinum Award of Excellent Leadership Award 2008 and the 2010 Award for Professional Excellence by the Central Council for Ibadan Indigenes (CCII).
Bolaji Ayorinde has travelled far and wide and participated in many seminars and conferences both local and international spheres. In November 2011, Chief Bolaji Ayorinde SAN was appointed by President Goodluck Jonathan as a Member of the Presidential Advisory Committee on the Prerogative of Mercy (PACPM). In June 2012, he was appointed Chairman of the Governing Board of the Legal Aid Council of Nigeria by the President.