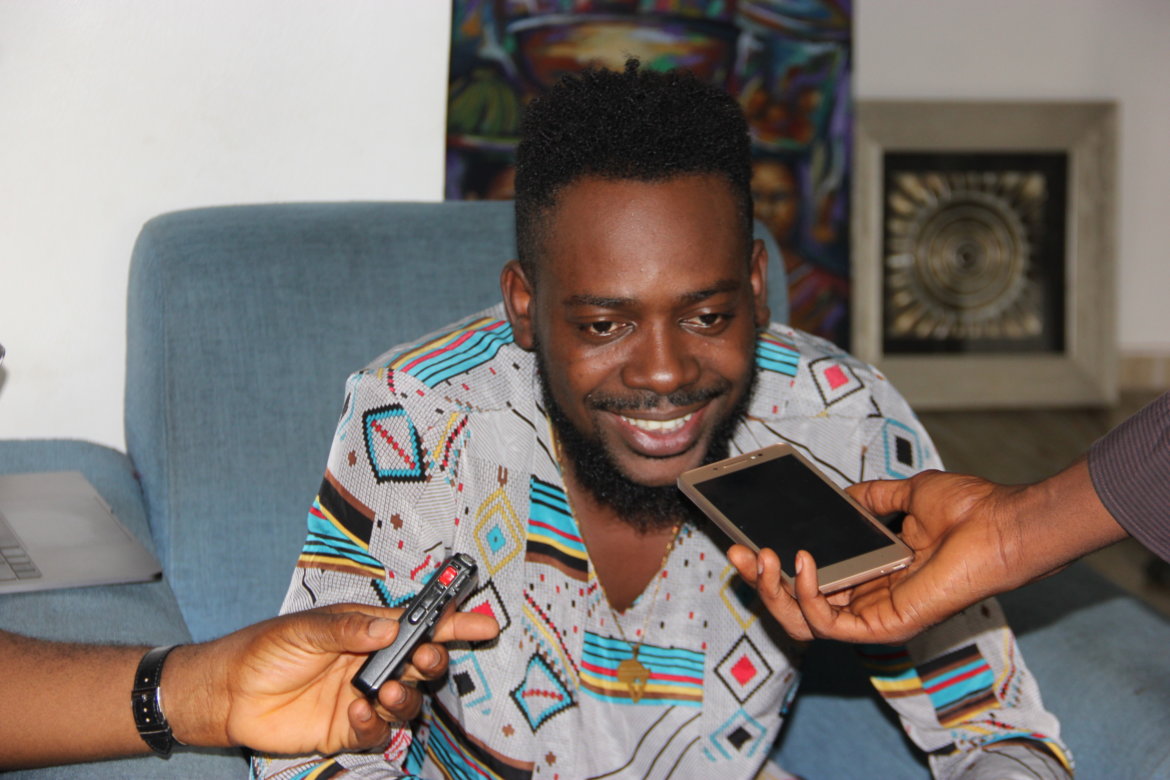 He started out as a graphic designer, but upon discovering his singing talent, he hit the studio and his first professional musical track “Sade” became an instant hit whilst his subsequent single Orente also enjoyed massive airplay and positive reviews from music critics and fans.

No doubt Adekunle Kosoko popularly known as Adekunle Gold has carved a niche for himself in the industry in just 3 years of venturing into professional music.

The Arts and Industrial design graduate of Lagos State Polytechnic worked briefly for Jumia, Konga and Mobilizer in a space of 3 years before cutting his career teeth in November 2014.

Unknown to many Adekunle Gold used to be YBNL’s official graphic designer but after releasing his first music track “Sade”, Olamide liked it and immediately signed him on as an artiste in the record label.

In this exclusive interview with City People’s Publisher Seye Kehinde and the trio of Femi Fabunmi, Jimmy Abdulrasheed, and Adeola Fagbiye, Adekunle Gold spoke extensively on why he left YBNL and what he is cooking up for his fans and music lovers.

What have you been up to since January this year?

I have been up to a lot, recording, releasing singles. I have a project. One night stand, this is my band and we are known as one night stand with Adekunle Gold and the 79 element.

Our first tour was in London, we did it already, it happened on June 30th 2017. It was a sold out event, a week after we went to Dublin, right now we are planning more European countries, Canada, America and other places.

Moreso, I am working on my second album which will drop next year by God’s grace and it is titled about 30. I must say I am an independent artiste now and it has been very interesting. 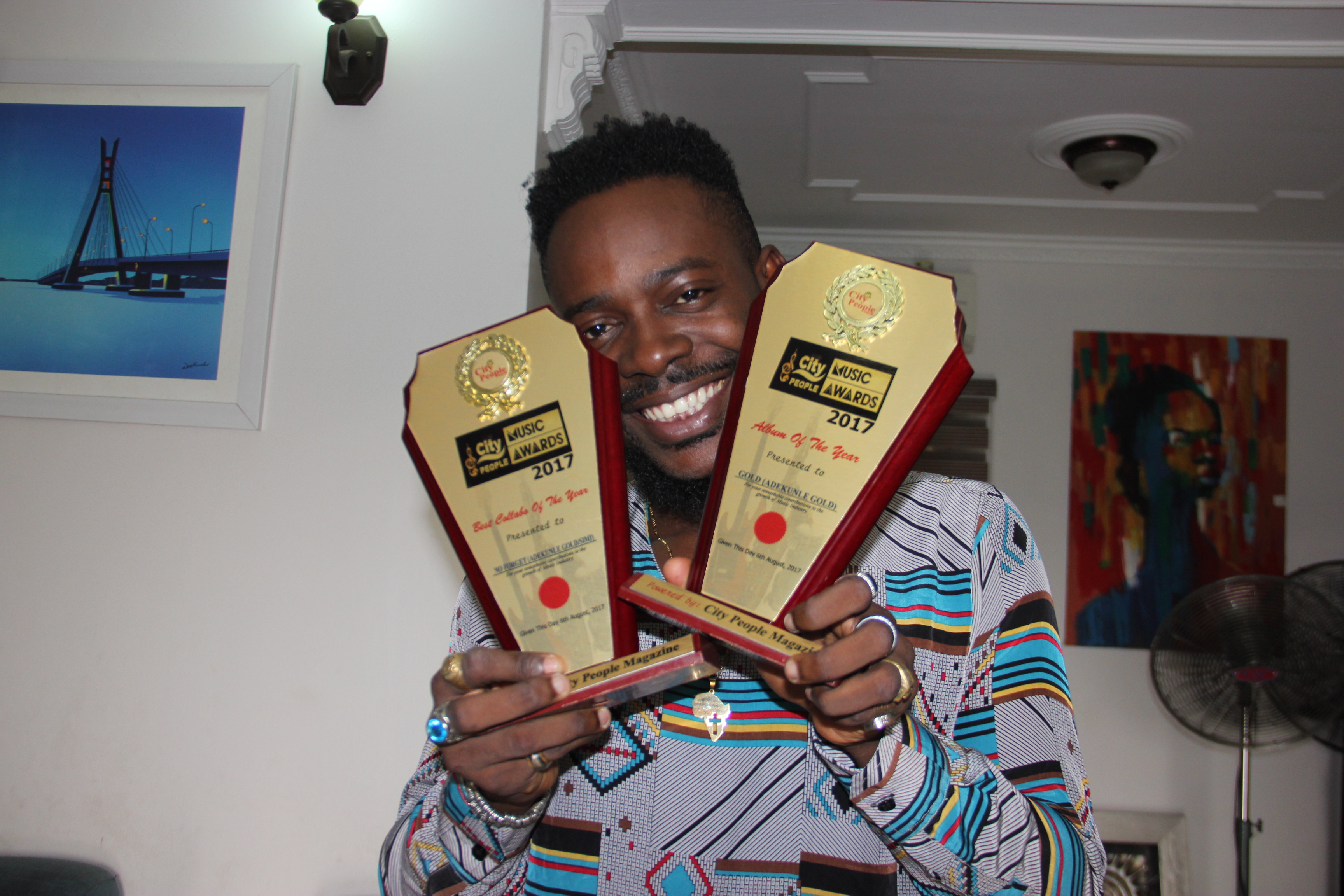 How has independence been for you and what made you take that decision?

I am still very grateful to Olamide. I am not officially with Olamide but I am still with him. When I was officially with him he gave us free hand to work and relate, whatever we needed was readily provided for us, he helped us with funds and also interviews, he talked to people that will promote our songs, he gave us airplay. Simply put, we were given free hand to operate. So what I am doing right now is a continuation of what Olamide started.

What plans do you have on the ground now?

Thank God for Olamide he has taught us many things, he took us on a media tour, we got plenty interviews and airplays, right now all that has continued, I have amazing manager, I have radio stations who are steadily playing my songs. Definitely I can’t achieve all these without the input of all of you.

How many albums have you released?

Just one, I got signed on to Olamide’s YBNL 2 years ago, so to those who knew me 2 years ago. They have been in the industry for 2 years.

(Cuts in)… How many singles do you have?

You were rejected as a prospective participant at the MTN project fame, how did you feel when re-invited to come perform for in-house participants?

I felt accomplished simply because I was told no by the judges of the competition. Two times I was rejected, 2009 was the last time I participated, one of the judges said he likes my voice but it wasn’t what they wanted. I gave up on reality show to face my own reality, thank God I strived to be better.

So when project fame reached out to me I felt honoured. It turned out to be a beautiful outing because I gave the show my best.

Speculations have it that there is a slight change in the way you sing these days, how true is this?

There is no change, I still do my thing. I just get creative nobody wants to be in a box. Somedays I could do a more fast beat some other time it could be slow but my content is still Adekunle Gold.

You now wear beards and Dreadlock, what informs your new look?

Well, this is not dreads, interesting the look you have been seeing before was stress, I comb my hair almost everytime. This is my natural hair I have curls, I just went back to how my hair looked before. As for beards, a man has to grow because he needs to get all the girls.

How did you meet Olamide?

I used to design for him, I mean graphics for YBNL and all. I released Sade and Olamide liked it and invited me over.

Do we want to know why you left YBNL?

I didn’t leave, I mean not that I wanted to leave, if I had my way I would stay. YBNL has been the best platform for me ever, Olamide signs artistes for two years intentionally because he needs to grow more upcoming artistes from the street.

For him an artiste can leave after two years if he has done well and can stand on his own. Olamide is doing a form of discipleship, he signed Lil-Kesh, Victor and me, Lil contract expired and much later mine expired too.

Any plans to float your own record label?

Let me take you back, tell us about your background?

I am a Lagosian, I was born in Ikotun, I attended many primary schools before I proceeded to Keke High School, Agege from there I gained admission into Lagos State Polytechnic where I studied Arts and Industrial design. Before I set out to be a musician I worked with 3 companies Jumia, Konga and Mobilizer. I worked for 3 years before I quit for music.

At what point did you discover you could do music?

I knew I could sing when my aunt would take us out at night to teach us how to sing. She was in the choir, later I joined the choir too at a church called Doers of The Word at Agege. Also my dad played a big role too because he was always playing Ebenezer Obey, Sunny Ade and many more.

At a point, I formed a band, the Bridge, my friend Seyi keys, was my band mate. He is now my producer, he has produced many of my tracks. In November 2014, I decided to face music squarely and I released the single Sade, since then it has been fantastic.

How did you come about the name Gold?

Well, I was in a church listening to a sermon then the pastor said you can’t substitute rice for Gold so since then the name stuck.

What inspires your kind of music?

I discuss real life situation in my songs. People’s stories and my stories are what I sing about in my music.

I am still very much single.

Did you feature in one of Sola Allyson’s tracks?

I must say she is somebody who has not featured anyone in the industry. So I am favoured like that. She listened to my song Orente and liked it, she then put a call across to me. See, she is somebody I have always respected, her call was one of the good things that happened to me.She is one of my idols. I grew up listening to her songs.

What should your fans expect from you?

I will be releasing an album about 30, it has gingered me to sing about 30. I clocked 30 January 2017 and that has announce my Solo show too.

I play games all the time. I don’t really go out like that except visiting places I haven’t been before. I like taking pictures too.

When are you walking down the aisle?

I can’t say for now only God knows.