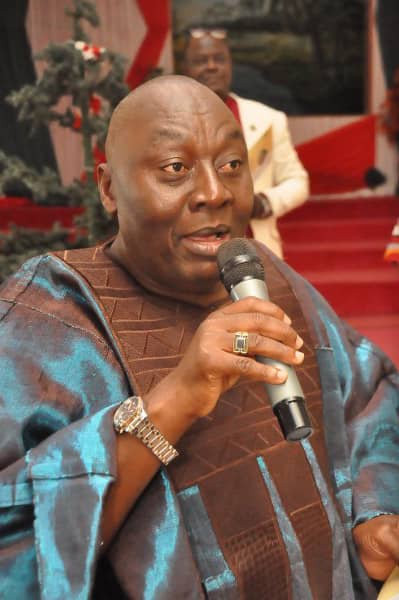 Pa Jenyo died on August 1st,2021 at the ripe and gracious age of 95 leaving behind wives, children, grandchildren, great grandchildren amidst the extended family. The burial ceremony was held between 9th and 10th December, 2021.

Celebrating the deceased for a life well spent, Service of Songs and Christian Wake Keep Ceremony was held on the 9th December at the First Baptist Church, located in Oke-Ejigbo, IlaOrangun.

The following day, 10th December, the burial service in honour of Pa Ajenyo was also held at the First Baptist Church after which his body was taken to it’s final resting place where he slept in the Bossom of his Lord. He was laid to rest in his residence at the Agbarajamo’s family compound in IlaOrangun.

Guests and dignitaries were hosted to a glamorous reception party at the massive hall located at Ila Grammar School.

The event has become the talk of town and party of all parties as the entire IlaOrangun community came life following the huge numbers of eminent personalities who came from far and wide solely to felicitate with Reverend Jenyo, his siblings and the entire family on the glorious exit of beloved father.

City People Reporter, JAMIU ABUBAKAR and Photo Journalist, SUNDAY OYEMADE were fully on ground at the ceremony. Here is a detailed account of the classy ceremony:

Pa Timothy Adebayo AjideJenyo was born 95 years ago by Ifajenyo, an Ifa priest in the ancient town of Ila Orangun.He was the second son but the last born of the family. He was born after staying in his mother’s womb for a period of 3 years and 6 months. He was truly a child of destiny.He did not only came to this world,but he saw and he conquered. Unfortunately,PaJenyodid not recognize his biological father who had died while he was in his tender age.He was however raised by his two uncles. The young Timothy Jenyo abandoned his father’s herbalist practice for Christianity which he practised through the Baptist Church till his death. Being the first Christian convert in his family, Pa Jenyo led many other members of the family into Christianity. The nonagenarian was a lover of children and western education as he could go to any to ensure that his children, children of relatives and people around him get quality education in his lifetime. Pa Jenyosurvived by wives, children, grandchildren and great-grandchildren.The entire IlaOranguncommunity will no doubt miss the deceased as he is always a reference point when men of integrity and uprightness are mentioned.

It was a classy tour as the body of Pa Jenyo was taken round the IlaOranguncommunity.His body was taken in a chariot and followed by a long procession as they toured significant places such as the ElemoOgo’scompound,IleOloye,Obalomo’s compound in Isedo, Eran’s compound after which the deceased was returned to his residence at the Agbarajamo’scompound.On the second day which was the day of the burial service,PaJenyo’s body was picked by the same chariot at his residence and was brought to the church premises before the undertakers from Di Heavenly Gate services completed the task of ushering  his body into the church.While this was going on the trumpeters are already at work and drummers rolling out the sound of celebration. It was indeed a befitting ride for man of Pa Jenyo who lived that long on earth.

AT THE SERVICE OF SONG AND CHRISTAIN WAKE KEEP

This was held on 9th December,2021at the First Baptist Church,Oke-Ejigbo,inIlaOrangun.The service was massively attended by dignatories, family,friends, business associates and well wishers.The service commenced at few minutes past 4pm and lasted for about two and half hours.It was a service laced with lots of hymns sang by the high performing church choirs.During the session,rooms were giving to some members of the deceased family and guests to reflect over the live and time of Pa Jenyo. Each of the speaker identify the many enviable qualities of the deceased.A highly inspirational sermon was given by Rev.Dr.P.O.Fadun.His admonition was centred on “the 2 ways” which he further explained as the broad and narrow way.He said the broad way gives room for all sorts of behaviours that contravene the way of the lord and the narrow way on the other hand places lots of restrictions but leads to the Lord.He however advised the audience to watch their lifestyle to ensure they are worthy of the Lord.Towards the tail end of the service,choirs from CAC, Mountain of Grace in Osogbosang to lighten up the night.

THE MOST STUNNING PART OF THE SERVICE OF SONGS

This is striking and is hardly seen in today’s society. Despite the fact Pa Jenyodied a Christian and his wake keep was held at the church premises,there was quite an impressive attendance of the Muslim faithful seated and actively participated in the programme.This showed that there unity of both faith and that should be encouraged across the country.Withthis,it won’t be out of place to say Pa Jenyo was man loved by all.

It may not occur to many know how close HRH Oba Anthony OlalekanFaseesin, the Aladeokinand RevrendOluwabunmiJenyoare.Both of them are friends from childhood and they do virtually everything together.Their friendship has grown over the years.No wonder after leaving the church at the songs of service,the highly revered king and his beautiful Oloriwent straight to RevrendJenyohouse to standby him as he prepared for his dad’s burial. Even after the entire burial ceremony and reception party, Kabiesi still find time to merry with his friend.Truly, a friend in need is a friend in deed.

MEET THE LOVING WIVES AND CHILDREN OF PA JENYO

AT THE BURIAL SERVICE

The burial service of Pa Jenyowas a remarkable one.It was held at First Baptist Church in IlaOrangun.It was so unique that the party started as early as 8am as scheduled and by 10.30 am the service was already rounding up.The service was officiated by RevrendDr.POFadun.Throughout the duration of the service,there were lots of inspirational messages passed by the church.The guest speaker at the ceremony was the highly revered and celebrated Archbishop–Emeritus,AyoLadigbolu.During his sermon,he admonished audience to life a life that would make them in the lord.He therefore cautioned them on behaviours that could make them fall short of the glory of the Lord.Behaviours like being unfaithful to the Lord,lacking forgiving spirit,engaging in fraudulent activities among others.He urged them to rain steadfast in Christ as exemplified by the deceased.Other activities at the burial service are the reading of the quite revealing and inspiring biography of Pa Jenyo,prayer for the family,special hymns, thankgiving,book launch and donation to assist the work of God through the church.Time spent at the church was never a waste.There were many lessons to take home from the service.

AT LAST PA JENYO SLEPT IN THE LORD

This is the final abode the soul of every Christian crave for.PaJenyo having lived for 95 years was finally laid to rest at his residence located in the Agbarajamo’s family compound,IlaOrangun,OsunState.He is the last of his generation and living this long is quite significant and family will forever miss him.PaJenyo was buried amidst tears right in the presence of his children, grandchildren,other members of the family,andwell wishers.

By 12noon, the hall was already set the reception party. Security personnel were on standby to check in guests,ushers were well positioned to attend to guests on request.The Faith Band was the official entertainer of the day.ImmediatelyRevrendOluwabunmiJenyo and his sibling stepped into the hall,the party began.It was a fun-filled event as there were lots of eye catchy moment in the hall.Guests have great fun.There was enough foods and drinks to go round while the Faith Band was at its best dazzling on stage.RevrendJenyo and wife took to the dance floor and it was indeed a glamorous party to behold.Infact,there was never a dull moment at the reception.

ROLL CALL OF DIGNATORIES AT THE RECEPTION

RevrendOluwabunmiJenyoand his darling wife,Mrs.OlusolaOmotundeJendor really stole the show at the reception party.Both couples were the point of attraction as they never fall short of expectation.When they stepped on the dance floor,they got the attention of virtually everybody in the hall.They wore two different outfits at the reception, firstly a classic AsoOkeand later on they changed to the Ankara AsoEbi.Both of them styled with their outfits.They were truly the stars of the day.

YeyeAdejokoOjois a top Lagos Civil Servant and socialite.The pretty Yeye’s presence was felt at the entire occasion. She stormed IlaOrangunwith her fellow society ladies to felicitate with RevrendOluwabunmiJenyo over the burial of his late father.Right from day 1 up to the day of the final burial and reception party,they have been ever present at supportive.The really dazzled at the reception party making top notched fashion statement with their trendy outfits.What will interest you more is that each of the ladies are successful in their respective fields of endeavour.Mrs.AbiolaOjekaleis the Proprietor of Nikadex Elementary and High Schools in Ibadan;Dr.KikeAdedotun, lecturer at AdeniranOgunsanya College of Education in Ijanikin,Lagos;Mrs.KemiOyelami, drink merchant and CEO KempearlVentures;Mrs.Abiola Hammed of Biola Bakes and Drinks Ventures;Mrs.BusolaIpaye,CEO of Febunik Fashion Collections and Mrs.OlasojiOmisoreAbimbola,a business woman who runs the popular Liquid Beer Palace located in Lagos.They really added glitz and glamour to the party.

What To Expect From TINUBU If He Becomes President – LAGOS Lawmaker, Hon. OLAWALE