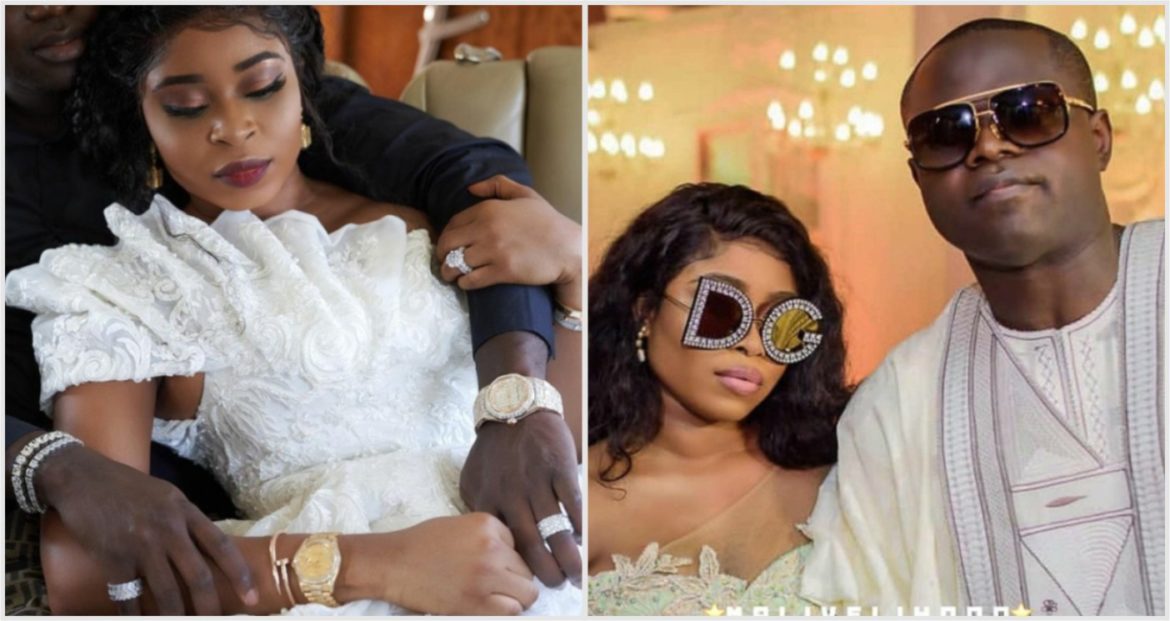 •Both Wear Over 10 Diamond Wristwatches

•Gives Out HUBLOT Wristwatches As Souvenirs

•Details Of The ABUJA Wedding

Abuja was shut down last weekend, precisely 4th and 5th of December when young billionaire and celebrity jeweller,  Micheal Olusola Awujoola popularly known as Malivelihood shut down the city for his classy wedding to Deola Smart, the pretty daughter of Senator Smart Adeyemi CON.

It was a wedding that trended on social media, as one of the most expensive weddings to rap up year 2020.

The beautiful nuptials between Malivelihood and Deola may have come and gone, but the memory still lingers on in the mind of all the important guests that were in Abuja for 2 days because it can be termed The classiest and most expensive wedding of 2020. Everyone and everywhere was abuzz of the preparation of the wedding and both families did not do less as they spared no cost to give their children a superlative wedding. Many of those who got invited and were able to have access to the venue have had only one thing to say, that this is ‘’the society wedding of the decade’. They are even insinuating that there has been no wedding even in recent times that could match this particular one in terms of sheer extravagance and opulence. The money spent, which is in Millions of Naira. The estimated money of about over 200million naira must have been spent. That’s not even up to the money coming in from the thriving luxury jewelry company owned by the groom and also from the sprawling businesses of the bride’s father. Over 200 guests were at the wedding to honour both parents and the couple and it lived up to expectation.

The wedding was a first-class wedding which made a big statement within the Nigerian social establishment. Most of the big shots in Abuja were at the wedding.

Getting inside the wedding venue on the D-day even with your customised box IV was like a camel passing through the eye of the needle. Security was 7-stars. IV’s were cross-checked with a list, so if you weren’t on the list, you weren’t going to enter, those inside couldn’t take anyone in, it was strictly an all invite party. For the whole wedding, the couple’s took the whole shine, they enjoyed themselves and looked beautiful in all their outfits. The lavish wedding gulped a lot of money starting from the couple’s attires to their accessories to all what went down at Abuja. The beautiful journey of the newest couple, Micheal and Deola Awujoola started with a proposal at Heathrow Airport in London in 2017. The groom proposed with a whooping  N56million naira diamond ring. All their wedding outfits were strictly from award-winning designers.

Part of the fanfare of the wedding was a gift of a customized Porsche car from the groom to his bride which must have also cost millions of naira. Money was sent on errands at the wedding as many had a colourful moment all through. The love story between Micheal and Deola is a very interesting one, the announcement of their wedding was done when they took to their individual Instagram pages last Tuesday to share their beautiful royalty-themed pre-wedding pictures ahead of their union. In the picture, Olusola is seen dressed in white regalia, adorned with beads, standing and holding a staff like a king, while Deola, also dressed in white, takes a sitting position beside him like a queen.

Deola said the photo shoot was inspired by Adeyeye Ogunwusi, the Ooni of Ife, and Olori Silekunola. On his part, Olusola described the upcoming event as the “royal wedding of all time”.”#MADS2020, we had to do it for the culture. Yoruba King & Queen. Styling done by my beautiful wife, Deola Smart. The Royal wedding of all time. Happy new month to everyone,” he wrote. Deola and Michael got engaged in 2017. The groom is a self-made billionaire while the bride is also from a prominent background. The couple started dating in 2015 and since then he has showered her with several expensive gifts – from a 10-Carat Cartier watch to a mansion worth $1.5million for Valentine’s Day.

Malivelihood took his relationship a step further by proposing to Deola on her birthday recently on November 21st at the Heathrow airport. He describes the ring as a “GIA 11.5ct diamond princess cut band with 2.5ct diamond, emerald cut centre stone, internally flawless! E colour VVS1”. He also revealed that the ring was worth $156k, which is approximately 56 million Naira. In fact, they gave out designer wristwatches Hublot as souvenirs. It was seen in the proposal video that they will be wearing over 10 diamond wristwatches for all the ceremony. The event planner for the wedding was exquisite luxury events, Ariyike and Roland the 7th makeover was in charge of the bride’s makeup. Photography was by beige pictures.

Her Komole Aso oke was by award-winning designer, Deola Sagoe, the bride’s gele was by georgesnip. Malivelihood whose real name is Olusola M Awujoola is a Luxury designer, fashion personality and jeweler born 39 years ago. He has a Bachelor’s degree in Business Administration, Masters’ degree in Global Management and LLM Commercial Law.

He also attended a Luxury Branding and Jewellery Making training/course in New York.

He is the founder and CEO of the multi-million naira designer company “Malivelihood Luxury” and the person behind most of the designed gold-coated items owned by several celebrities in Nigeria. He is fondly addressed by the name of his company “Malivelihood”. The groom is one of the most influential Nigerian businessmen with an estimated net worth of $30 million. He also owns different fleet of cars including Mercedes Benz and also a proud owner of the massive mansion. He is known as the main gold-coated designer for a lot of Nigerian celebrities such as Kcee and others. He became popular as a jeweler that redesigns watches, jewelry and phones by studding them with diamonds and pearls. The young money who loves to serenade his wife with good things once gifted her a hotel, no 1 hotel and lounge in Ibadan. Deola Smart is a Lawyer and businesswoman who is the CEO of Tuvia mobile. She is also into hair business.

Deola Smart’s No1 Hotel and Lounge in Ibadan remain the favorite of luxury lovers in Oyo State. Also dubbed homes to celebs, the hotel owned by Lawyer and businesswoman, Deola Smart partnering with her fiance, Nigeria’s luxury designer, Malivelihood boasts of the best amenities hotels do have.

Their colourful and expensive wedding was well celebrated with professional vendors who handled all the briefs for the day. It was a wedding which carpets all others as 2020 is gradually going to an end.

READ ALSO: 10 THINGS TO CONSIDER BEFORE BUYING LAND IN IBEJU-LEKKI

10 Things To Consider Before Buying Land In IBEJU-LEKKI