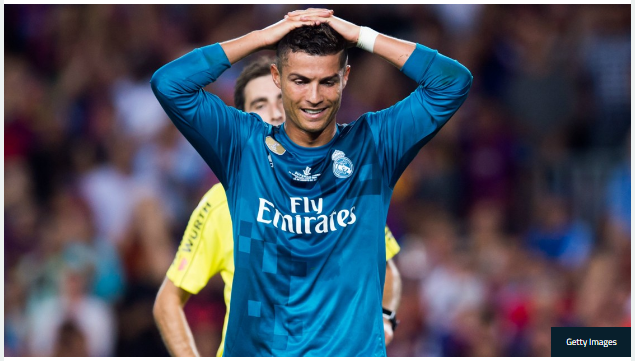 Cristiano Ronaldo’s return to La Liga began with a woe as Real Madrid suffered a shock 1-0 home defeat to Real Betis on Wednesday.

An inspired performance from their former goalkeeper Antonio Adan and a stoppage-time winner from Antonio Sanabria stunned the Liga champions after 12th placed Betis went home with all 3 points.

Ronaldo, starting his first La Liga game of the season following suspension, saw a goal-bound effort scrambled away sixty seconds later as an even opening 45 minutes had chances created and squandered at either end.

Sanabria had an effort disallowed for offside in the final minute of normal time but rose highest to head in a 94th-minute winner to secure a memorable backs-to-the-wall victory for Quique Setien’s side.

The defeat leaves Madrid without a win in their three home La Liga games this season and in seventh place in the table, seven points behind leaders Barcelona, who beat Eibar 6-1 on Tuesday, their fifth straight win.

Atletico Madrid continued their undefeated start to the season with a 2-1 victory away to Athletic Bilbao on Wednesday to move up to third, while Sevilla’s 1-0 triumph at home to Las Palmas left the Andalusian outfit second on 13 points.

With Real Madrid having equaled Brazilian outfit Santos’s 54-year-old record of scoring in 73 consecutive games last time out against Real Sociedad, all the talk before kickoff was of the attacking prowess of Zinedine Zidane’s side.

It was the visitors, however, who should have taken the lead as Sanabria saw an effort spectacularly cleared off the line after two minutes.

After the restart, however, it was a different story as Madrid laid siege to Adan’s goal but Ronaldo and others failed to find the back of the net.